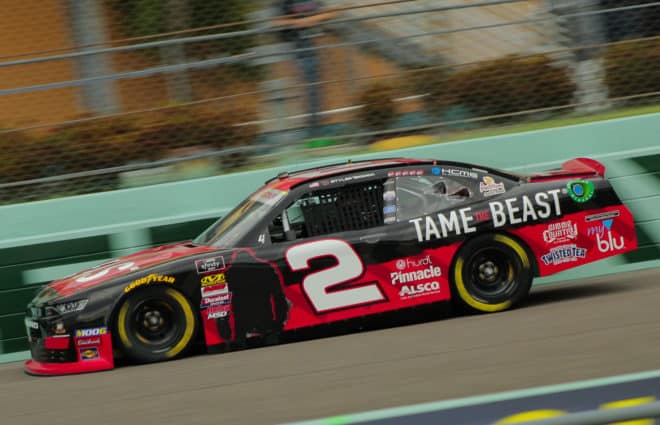 Reddick’s lap was seven-hundredths of a second faster than fellow championship contender Cole Custer. The No. 00 was faster than Reddick for part of his lap, but lost the advantage coming to the line. Interestingly enough, this result creates the same front row that this race had in 2017. On that day, neither driver was in the Championship 4, but Custer dominated. He led 182 of the 200 laps and won by 15.405 seconds.

The only Championship 4 candidate who failed to qualify in the top 10 was Justin Allgaier. He struggled and recorded a lap at 162.930 mph, good only for 16th on the grid.

Landon Cassill qualified 13th in Morgan Shepherd‘s No. 89. The team intends to go the distance today, thanks to additional sponsorship.  If they make it to the finish, it will be the first time that a Shepherd Racing Ventures entry will have finished a race since 2013. Shepherd told Frontstretch‘s Dustin Albino earlier that he believes Cassill is capable of a top-15 performance.

The plan is for @landoncassill to run the full race today for Shepherd Racing Ventures in @XfinityRacing.

Other notables include Jeremy Clements qualifying 11th and BJ McLeod running a career-best 12th in his KSDT-sponsored No. 4 for JD Motorsports. Colin Garrett will start 15th in the Xfinity Series debut for Sam Hunt Racing.

MBM Motorsports’ Bobby Dale Earnhardt, who ran 37th fastest, is the only driver who failed to qualify.

Coverage of the Ford EcoBoost 300 is scheduled to start at 3 p.m. ET with Countdown to Green live from Homestead-Miami Speedway on NBCSN. Race coverage will follow at 3:30 p.m.

Phil Allaway has three primary roles at Frontstretch. He's the manager of the site's FREE e-mail newsletter that publishes Monday-Friday and occasionally on weekends. He keeps TV broadcasters honest with weekly editions of Couch Potato Tuesday and serves as the site's Sports Car racing editor. Outside of Frontstretch, Phil is the press officer for Lebanon Valley Speedway in West Lebanon, N.Y. He covers all the action on the high-banked dirt track from regular DIRTcar Modified racing to occasional visits from touring series such as Tony Stewart's Arctic Cat All Star Circuit of Champions.
Previous Ross Chastain Comes Up Short of 1st NASCAR Championship
Next Tracking The Trucks: Inside Winless Wonder Matt Crafton’s Championship Season