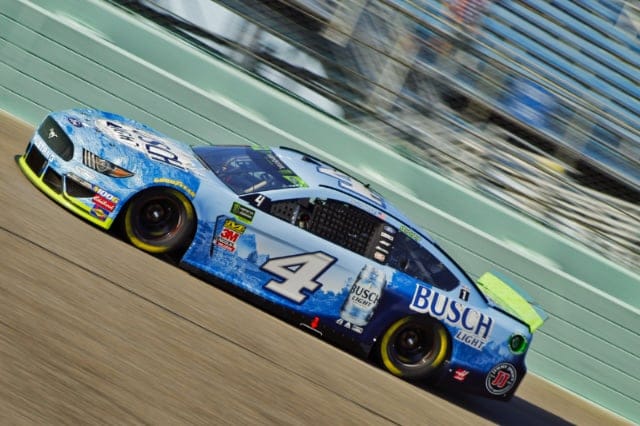 2019 was the year of Joe Gibbs Racing, and when it came to crunch time, Kevin Harvick fell a little short.

The 2014 Monster Energy NASCAR Cup Series champion led 41 laps and won stage 2 during the Ford EcoBoost 400 (Nov. 17) from Homestead-Miami Speedway, but found himself playing catch-up in the final stage and wound up coming home fourth. The result placed him third in the championship standings.

Harvick was kept on the race track by Crew Chief Rodney Childers during the final round of green flag pit stops, hoping for a caution in order to outrun eventual champion Kyle Busch, runner-up Martin Truex Jr. and Denny Hamlin.

“We just needed to do something different,” Harvick said. “Those guys, they were so much better than us on the long run. Really, our best chance was to have a caution there at the end and never got one. We just did something different hoping for a caution, and that’s what you’re supposed to do in those late situations like that. Just do the opposite of the cars you’re trying to race, and it just didn’t work out.”

The strength for the No. 4 Stewart-Haas Racing team came at the beginning of runs. After that, the falloff of their Ford Mustang was too steep.

“On the restarts, I could do what I wanted to do and I could hold them off for 15 or 20 laps right there,” he said. “And you know, this race has come down to that every year, so you kind of play towards that, and they were quite a bit better than us on the long run, but we had a really good car for those first 15 or 20 laps on the restarts and had a lot of speed. Just never got to try to race for it there with a caution.

Childers made the call to stay out and try to catch a caution. In doing so, Harvick had the freshest tires for the final stint, allowing him to not only un-lap himself, but drive up to fourth.

“We had the best car those last 30 laps,” Childers said. “We just tried to stay out there to get a caution and we didn’t get one […] We made some adjustments, and it was really good there at the end. Just needed to be in a better position before that. Overall, [we] had a good race car and just wasn’t at the right place at the right time.”

During the 400-mile event, large gaps organically came about between positions, sometimes upwards of six-seven seconds. Childers saw it coming early in the weekend and attempted to adjust for it.

“The pace was about a second faster than what we thought it was going to be,” he said. “Had to work through that in practice. In the race, those four cars were the class of the field most of the night. You got the best four drivers and the best four teams racing against each other, pretty much. And when it’s like that, they’re going to run 1-2-3-4, and I think they would have if Denny [Hamlin] didn’t have the problem there.”

Post-race, Childers immediately found members of Joe Gibbs Racing and Toyota to congratulate them on their accomplishment.

After coming up a little bit short, @RodneyChilders4 sought out members of @JoeGibbsRacing and @ToyotaRacing to congratulate them amid the championship celebration.

“When we won the championship, Adam (Stevens) was one of the first guys that came to me,” he said. pic.twitter.com/zC9Xm7jfWp

“We all treat each other like family,” Childers said. “When we won the championship, Adam [Stevens] was one of the first guys that came to me. Paul Wolfe, too. So that’s not abnormal.”

In a season that started slow, had some peaks in the summer and wound up resulting in their third-straight top-three-points finish (sixth in the last seven seasons), Childers reflected proudly on the year that was, but still wanted more.

“It is what it is, still a good year for us,” he said. “Came a long way in a short period of time and got better when we needed to.”