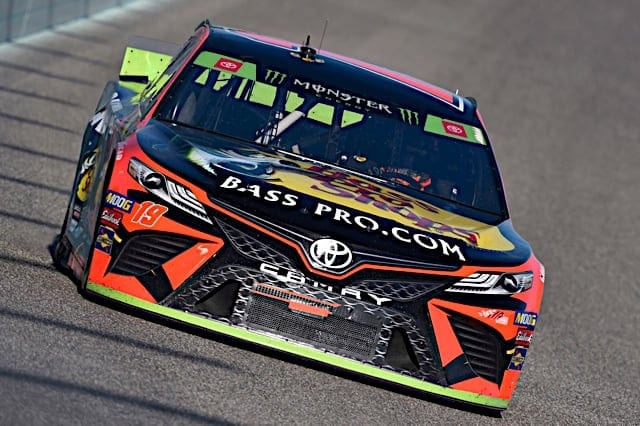 When Martin Truex Jr. won at Martinsville Speedway for the first time three weeks ago (Oct. 27), Cole Pearn went to work on the team’s car for the 2019 Monster Energy NASCAR Cup Series finale at Homestead-Miami Speedway.

Starting the race from third position, it took only a couple laps to see the No. 19 car out front — where Truex built a lead of over five seconds. By the end of the first stage, there were only 13 cars on the lead lap.

In the second stage, Truex was dominating again. That was, until Pearn called his driver to pit road on lap 120 for four fresh Goodyears.

Within a lap of re-entering the track, Truex was off the pace, complaining the car was too tight. The pit crew had realized it put the scheduled right front tire on the left side of the car and likewise for the scheduled left front tire.

The mistake forced an unscheduled green-flag stop to fix it on lap 122. All of a sudden, Truex’s title hopes took a hit from which they’d never recover.

When he came back out on track, the No. 19 Toyota rocketed through lapped traffic, putting Truex in position to be the free pass. On lap 136, John Hunter Nemechek slid through turns 1 and 2, and NASCAR called the caution, allowing him to get that lap back.

Over the final 20 laps of stage two, Truex went from 14th on the scoring pylon to fourth, setting the No. 19 team up in good position for the final stage. With a good pit stop, Truex restarted third and for a second, hopes rose in his camp.

But he could never get back up front. In the final 107 laps, Kyle Busch pulled away from Truex, Kevin Harvick and Denny Hamlin (pit crew mistake) — the rest of the Championship 4 — en route to his second title. Truex finished runner-up, 4.5 seconds back, placing second in the Cup Series standings for the second consecutive season.

Track position just proved too much to overcome. Even a late bid by crew chief Cole Pearn to pit a few laps after Busch, giving Truex fresher tires at the end, came up short. A 10-second deficit could only be cut in about half by the end of the race.

“I didn’t know at that point, I just did whatever Cole said,” Truex said of the plan following the miscue. “He does the strategy, I just drive. Obviously, it didn’t work out. We were quite a bit quicker at the end, but just too far back. No chance.”

Truex believes losing control of the race lost him the championship. Just like many other races with the 2019 aerodynamic rules package, clean air was king.

“Ultimately, it was the loss of track position that bit us,” he said. “We restarted the third stage in third, and really wish I could have been second or fourth. I got blitzed on the outside by the [No.] 20 and the [No.] 22 and a couple of those guys. I had to run the crap out of my right front [tire] to get back by them. I got tight on that run, and it took me forever to just get by a few cars.

“Ultimately, it came down to track position and I felt if I could have been out front controlling the race, I could have drove away from them. At the end, we were quite a bit quicker, it was just too much of a gap. It’s part of the deal. You’ve got to be perfect. One mistake probably cost us a shot at it.”

As for the pit road fiasco, Pearn says it was a mistake by one of the pit crew members.

After the pit stop, Pearn climbed down the pit box to see what happened. As for the answers he received, he noted, “I was just trying to figure out what happened. Of course, nobody has a good answer when stuff goes bad.”

Following the race, Truex said he can’t recall something like that ever happening to him in any type of race prior.

“I’ve never had that happen,.” he added. “I don’t even know what to say. It doesn’t drive good with the left front on the right, I can tell you that. Very tight.”

However, Pearn can recall it happening, though not while being paired with Truex.

“It happened one time at Pocono, like f*cking eight years ago or something,” he said.

Regardless, Truex’s second-place finish means he’s had three consecutive seasons of finishing inside the top two in points. In that span, he’s won 19 races. But as for aiming for a second championship, that’ll have to wait for 2020.

“These things don’t come around every day,” he said. “Second two years in a row definitely stings a little, but the fact that we have one is still really a big deal.  It’s hard to win these things.”

Dustin joined the Frontstretch team at the beginning of the 2016 season. 2020 marks his sixth full-time season covering the sport that he grew up loving. His dream was to one day be a NASCAR journalist, thus why he attended Ithaca College (Class of 2018) to earn a journalism degree. Since the ripe age of four, he knew he wanted to be a storyteller.
@@DustinAlbino
Previous Kyle Busch Cruises To Ford EcoBoost 400 Victory, 2nd NASCAR Cup Title
Next Overheating Costs Denny Hamlin Shot at Elusive NASCAR Cup Title