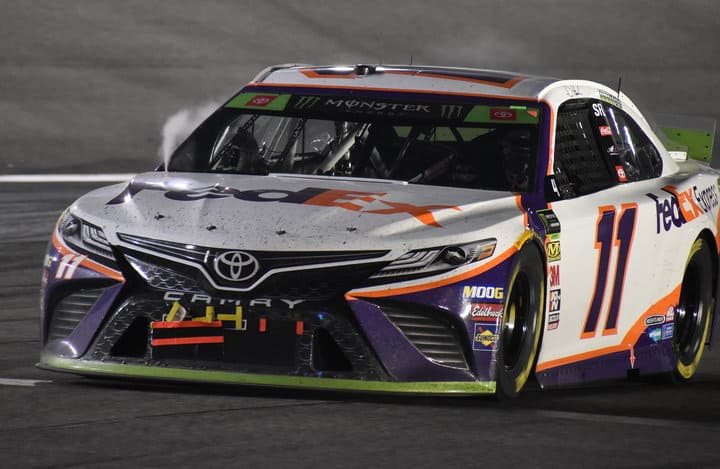 Denny Hamlin went into the Monster Energy NASCAR Cup Series championship race at Homestead-Miami Speedway on Sunday (Nov. 17) with a shot at the title.

But came up empty once again.

Hamlin previously failed to get the title in 2010 and 2014, but this year was perhaps his best shot to grab his elusive championship. Except for in the category of wins, Hamlin had career bests in nearly every stat. He also entered Homestead with the most momentum, winning at ISM Raceway last week in a must-win situation.

Not to mention, Hamlin had a basketball legend in his corner, as business partner and personal friend Michael Jordan was in attendance, cheering on Hamlin.

But this time in the championship race, Hamlin lacked speed early. He was the worst-running Championship 4 driver for a large portion of the first two stages and even ran in the back half of the top 10 at some points.

“For the first half the race, we just weren’t fast enough,” Hamlin said. “We weren’t handling very good. And all of a sudden, it went night time and we took off.”

Right out the gate in the final stage, Hamlin took the lead from Joe Gibbs Racing teammate Kyle Busch.

Denny Hamlin passes Harvick for P2 and says: “It ain’t fuckin’ over.”

Chris Gabehart: “None of us thought it was. Whole new ballgame now. B-F-H. Lock in.”

The No. 18 slipped back by Hamlin two laps later, as the Virginia native kept his No. 11 Toyota fairly close to his teammate. Busch gapped him by over three seconds, but Hamlin had cut the gap by one second by the time the final round of pit stops came.

“I don’t know [if I could have caught him]. It remains to be seen,” Hamlin said. “I stayed right there within a couple seconds of him. At this racetrack, you can’t use all the tricks until the end because it puts your car at risk.

“But I was getting ready to give it all I had — to empty the tank and if we crash, we crash. But who knows? The [No.] 18 was good, let’s not discredit that. But I would’ve loved the shot to get him.”

Needing one more adjustment to try to have something for his teammate and championship rival, Hamlin’s Crew Chief Chris Gabehart called for the crew to add more tape to the grill of the No. 11 car.

Not long after, Hamlin reported the car was overheating and that he had to pit to remove the tape or else the engine was going to blow.

Hamlin made an unscheduled pit stop under green flag conditions to take the tape off, losing a lap in the process. He was able to un-lap himself on the track, but only recovered for a 10th place finish — fourth among the Championship 4.

“But really, at that point in the race, our car woke up, I woke up, and it was fast. It was gonna be fun. I was really looking forward to running those last 40 laps and having the challenge of ‘Can I get him? Can I go get him?’ but just didn’t really get that chance.”

Despite the gamble gone wrong, Hamlin still praise his rookie crew chief, Gabehart, who returned the veteran to victory lane six times in 2019 one year after going winless.

“Ours [mistake] was kind of self-inflicted, but it wasn’t from a lack of effort,” Hamlin said. “It wasn’t because we made a mistake, we deliberately made a change, and it just didn’t work out.

“I was frustrated for sure, but he [Gabehart] is going for it, right? He is going for it. That’s just the way it is. We’ll go in next year and win a lot of races. We’re gonna win a lot and hopefully get back in this position again, learn from it and see what happens.

Gabehart took responsibility and said the aggressive tape call was on him.

After a chat, he says, "my driver is right there and I want to spend some time with him," and they hug and then share a laugh. pic.twitter.com/6wL7CWipJ6

“We definitely got a little aggressive, and it cost us. But he’s also been really aggressive and won us races, too. He’s going for it and saw an opportunity to add some speed to the car, and it didn’t work out.”

Despite again winning the title and failing to do the one thing he has left to do in his NASCAR career, Hamlin remained more upbeat than in previous years of championship defeat.

“I don’t think I could have done a better job. I didn’t leave anything out there,” Hamlin said. “Like I said last week, I was gonna come in here and do the best I could and live with the result either way. Either way.”

Since your such a good longtime loser Denny, go cheer Marty up a little. I feel bad for him.