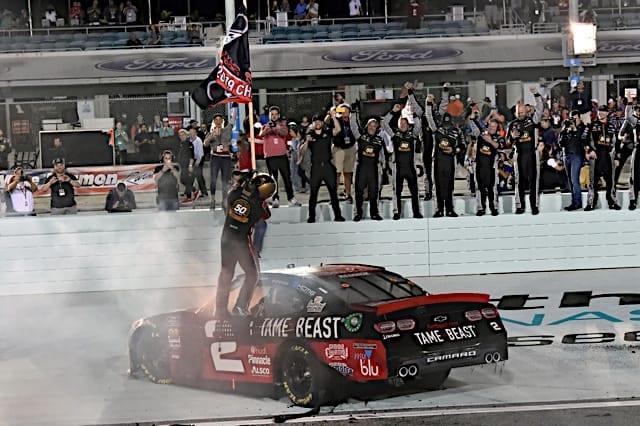 Denny Hamlin had Michael Jordan in his corner. Kevin Harvick had every resource at Stewart-Haas Racing. Martin Truex Jr. had the most time to prepare and the most wins on the Cup circuit this season (seven).

Kyle Busch had a 21-race winless streak and a mediocre playoff under his belt. He seemed miserable in interviews and a step behind his joe Gibbs Racing teammates in speed.

But once the green flag fell at Homestead-Miami Speedway, none of that mattered. Busch hung in there, stayed consistent while others around him faltered and emerged the 2019 Monster Energy NASCAR Cup Series champion.

The seas parted for Busch in a race Truex seemed ready to turn into a rout. But a bizarre sequence in which the crew put the wrong tires on the wrong sides of the car killed off his chances. A track position race with a green-flag feel would leave the No. 19 Toyota helplessly behind.

Hamlin was next up, keeping Busch within striking distance until a piece of tape was put in the wrong spot during his final green-flag pit stop. An overheated engine forced an unscheduled stop, costing him a lap and his title shot.

Finally, Harvick stayed out longer than any of the three JGR Toyotas. It was his only chance as the car was built for short-run, not long-run, speed. But once the No. 4 car pitted, Busch had clear sailing and put it on cruise control to the checkered flag.

It’s Busch’s second title, the first driver to win multiple championships in NASCAR’s winner-take-all format established in 2014. It came in a year where he passed Richard Petty for the most victories in the sport’s top three series and also won the regular season points title.

Suddenly, going two-for-five in five consecutive championship appearances has a far better ring to it. Busch is finally playing catch-up to a goal of five titles he’s had for most of his career. -Tom Bowles

You know all that conversation about the Cup Series aero package from 2019? Scratch that, because the Xfinity Series rules package is lights out, setting up for a race of the ages on Saturday (Nov. 16) for the championship at Homestead.

By winning the pole, Tyler Reddick became a slight favorite, especially after his dominating performance in the second half of the 2018 event. Alongside him sat Cole Custer, who led 182 of 200 laps in the 2017 Homestead race.

Once the green flag flew, those two drivers pulled away from the field. However, when a late opening stage debris caution came out, Reddick and Custer pitted, while Christopher Bell and Justin Allgaier, the other two Championship 4 drivers stayed on track.

Reddick and Custer rocketed through the field, though Custer had to pit under green early into the second stage. Come the final lap of the stage, the No. 00 Ford squeaked by race leader Austin Cindric to get his lap back, setting up for a heavyweight bout in the final stage between Reddick, Custer and Bell, while Allgaier’s No. 7 was a bit off.

During the final half of the race, there was roughly a 30-lap stretch where the series’ “Big Three” were trading blows at the front. But after green flag pit stops, it was Custer that found himself out front, narrowly ahead of Reddick.

With less than 20 laps remaining, Reddick completed a slidejob on Custer for the lead. The next set of corners, Custer repaid the favor, though the No. 2 performed a crossover, going on to win the race.

When the checkered flag was displayed, Reddick was victorious, becoming the first driver in Xfinity history (38 years) to win consecutive championships with different teams. Last season, he was victorious with JR Motorsports. This season was Richard Childress Racing’s fifth series title.

Overall, this will be known as one of, if not the best championship races in either the Cup, Xfinity or Truck series since their respective playoff formats were implemented. The “Big Three” came to play, and it was only fitting that the final race of the year ended that way. After all, 2019 is the first season in which three series regulars won at least six races. The Xfinity rules package is top-effing-notch. – Dustin Albino

Who says second place is always the first loser? That was plenty good enough for Matt Crafton on a Friday night (Nov. 15) no one was catching Austin Hill at Homestead-Miami Speedway. Hill won the battle but Crafton won the war in becoming the first winless Truck Series champion since its inception in 1995.

Cinderella story Ross Chastain and title favorite Brett Moffitt, respectively, could never get the handling right on their trucks the whole night. Crafton, meanwhile maintained track position and maximized his gains on restarts to maintain control of the championship race. It was masterful manipulation of the playoff system, quite a comeback from a Round of 8 that ended with Crafton sitting with a DNF after a blown Ilmor engine.

Ironically, those problems may have helped Crafton as it eliminated two of the biggest title threats: his Thorsport Racing teammates. Crafton could then press on with the resources of the whole organization behind him and outlasted the competition in the one race that mattered.

Plenty of critics will decry the way in which Crafton captured the championship. But the reality is a driver known for consistency used the same formula all over again, just with one less win (see: 2013). He’s now just one title away from tying the record Ron Hornaday, Jr. set during his long, storied career in this series. – Tom Bowles

The 2019 Brazilian Grand Prix was a strategy duel to start the day, and was a rather tame Grand Prix until about 20 laps to go, when Valtteri Bottas lost his engine, bringing out the safety car. Max Verstappen seemed to have the race in control as Lewis Hamilton just could not match the Red Bull’s pace. But when the safety car came out Verstappen pitted and Hamilton did not, Verstappen blew past him and sped off into the distance.

But then, the moment that F1 fans figured may happen at some point this season with two very competitive drivers. Charles Leclerc got past Vettel for fourth, Vettel came back at Leclerc with DRS, the two cars barely touched, but enough to pop both cars tires. The radio messages were non-too kind to each other as an overall disappointing season overall for Ferrari is coming to a close with much dramatics as all F1 fans wish to be a fly on the wall in the Ferrari debrief room after the race. It is not too surprising that this happened though, they have a young driver in Leclerc that is prone to mistakes, but very quick, and an experience Vettel who is very fast but also prone to mistakes. F1 fans saw sights of Vettel and Webber in Turkey 2010, and we will see what happens internally moving forward. Ferrari is not usually the team to let their drivers race.

We all thought the drama was over after the Ferrari contact, but as the safety car for the contact came out, Mercedes for some reason brought Hamilton in for tires. With the field so close together it lead to Alex Albon moving up to second, looking for his first career podium, and Red Bull exile, Pierre Gasly moved up to third position to everyone’s surprise. After passing Gasly easily for third, Hamilton tried a very optimistic move on Albon for second and sent the rookie Red Bull driver spinning out of his first career podium, but then Gasly swept past them both to move into second with two laps to go. Hamilton could not pass Gasly with his mangled car, resulting in a photo finish.

An amazing moment for Pierre Gasly, who was the laughing stock of F1 the begin the season, having taken Daniel Ricciardo’s seat in the Red Bull. Gasly started the season finishing outside of the points, and tightly struggled in that car. He was lapped by Verstappen twice in the same car, scored no podiums, even when Daniil Kvyat did in a Toro Rosso in Germany. This forced Red Bull’s hand and swapped him back to Toro Rosso for the rookie Albon. To see Gasly come back very strong since Spa in that Toro Rosso, leading to a podium finish in Brazil proves Gasly’s worth as a driver and that maybe the Red Bull car itself isn’t for his driving style. A bittersweet finish for the Red Bull brand, Albon ran strong and was in second with two to go, and tragically had his first podium taken away by a move by Hamilton, giving Gasly second. A great race as we approach the final race of the season in Abu Dhabi. Despite there not being a strong championship battle, there were many exciting races this season and Brazil lived up to the hype.  – Drew Mongiello

Wayne Taylor Racing is facing some big changes in 2020.  Jordan Taylor, son of team owner Wayne Taylor, has left the team to drive for Corvette Racing full-time in the GT Le Mans class.  Renger van der Zande will return to the team for his third season in the team’s Cadillac DPi-V.R., but there will be reinforcements.

To replace Jordan, the team has hired Ryan Briscoe, most recently of Ford Chip Ganassi Racing IMSA, to replace him.  Briscoe has a varied background in open wheel racing and sports car, but he hasn’t raced a prototype since 2013 in the American Le Mans Series for the now-shuttered and infamous Level 5 Motorsports.  In prototypes, Briscoe has 10 career class victories, two of those being overall victories with Team Penske in the Porsche RS Spyder at now-Utah Motorsports Campus and Lime Rock Park.

Briscoe has four previous starts with Wayne Taylor Racing back in the Grand-Am Rolex Sports Car Series.  Three of those were in 2006 in the team’s Pontiac Riley Mk. XI.  The other was in the 2011 Rolex 24 at Daytona in the team’s Chevrolet-powered Dallara chassis.  His best finish was second in the Crown Royal 200 on Watkins Glen International’s short course in 2006.

For the endurance races, the team has additional firepower.  Toyota GAZOO Racing’s Kamui Kobayashi will return to the team, but only for the Rolex 24 at Daytona.  Effectively, Kobayashi has taken the role that Fernando Alonso held in 2019.

The third driver role for the endurance races will be held by Scott Dixon, who served in a similar role in Ford Chip Ganassi Racing IMSA’s No. 67 Ford GT for the past few years.  Dixon has 25 career starts in prototypes, 14 in the Grand-Am Rolex Sports Car Series, four in the American Le Mans Series and seven in the WeatherTech SportsCar Championship.  In those 25 races, Dixon has two career victories.  Those wins just so happened to come in the Rolex 24 at Daytona in 2006 and 2015, both with Chip Ganassi Racing in Daytona Prototypes. – Phil Allaway