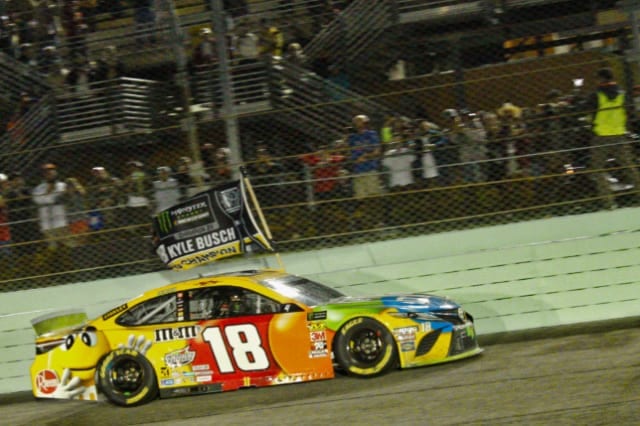 ONE: A Worthy Champion

In the last 10 years, no one has won more Cup races than Kyle Busch, so it seems apt that he finish up the decade with a second title, four years after he secured his first. Busch’s undoubted driving prowess has always suggested multiple titles, but as the years passed since his maiden crown, questions started to arise as to whether he would again back up his regular-season dominance when it mattered most. On Sunday he silenced those doubters (or haters as he would say) once and for all.

“I can’t wait to get ready to chase a third title next year,” Busch said. “Titles are my legacy, and I want to win a bunch of them. I think I should have more titles than this already.” And the fact is he’s probably right. Busch won’t be 35 until next May, so it’s fair to say he could have well over half a decade or more of chasing championships. And for a man so consumed by racing, assuming he still has the desire, you’d have to figure he’d run — likely very competitively — well into his 40s. Congrats to the champ, a worthy winner. My guess is it won’t be the last time we say that.

Congratulations are in order, too, for Tyler Reddick, who won a second straight Xfinity Series championship, and Matt Crafton a third Camping World Truck Series title. Reddick took the lead with 18 laps to go after a terrific battle with Cole Custer and Christopher Bell. All three drivers will resume their rivalry in the Cup Series next season. For Reddick’s team owner, Richard Childress, it was a fifth second series title in the company’s 50th season. Meanwhile, in the Truck Series, Crafton won the third title of his 453-race, 19-full-time-season career with just seven top fives and a mere 44 total laps led. This is the inherent risk of the win-and-advance, winner-takes-all final four format. “We didn’t win tonight, but at the end of the day we can always say we won the battle,” Crafton said. “We got the big trophy at the end of the year, and that’s all that matters … .” Pretty hard to argue with that, really.

THREE: Next Up: The Great American Race

Technically speaking, next up it’s the offseason, but in the spirit of looking forward, it’s less than three months until we crank up those engines for the 62nd running of the Great American Race, the 2020 Daytona 500. Barring any unforeseen circumstances, seven drivers will take the green flag as previous winners: Jimmie Johnson and Denny Hamlin have both won twice while Kurt Busch, Austin Dillon, Kevin Harvick, Joey Logano and Ryan Newman have one win apiece. Compared to the other major stick-and-ball sports, the NASCAR offseason is the shortest. Yet even with that fact in mind, it still feels like an age beyond Homestead and 200 laps of high octane madness on the high banks of Daytona. Next season will also mark the first time since 1971 that the series will not have a principal title sponsor, with the governing body set to announce details of a tiered sponsorship program at the banquet. It will seem strange just to be referring to the NASCAR Cup Series.

It was a red-letter kind of a day for 23-year-old Formula One driver Pierre Gasly, who finished second in the Brazilian Grand Prix, securing his first podium finish in 46 attempts. There’s no question it has been a trying season for Gasly, who was demoted from Red Bull to the second-string team Toro Rosso after a disappointing first half of the season; Alex Albon took his seat. In the seven other races Gasly has run for Toro Rossi, he has a best finish of eighth (Singapore and Japan), so this was a very special day reflected in his ebullient champagne-soaked celebration.

“As a kid you dream about being in Formula One, and then when it happens it becomes the best day of your life,” said Gasly, who narrowly held off a charging Lewis Hamilton. “And after you dream about your first podium.” For Gasly, that long cherished dream is now a reality. In Formula One, the opportunities are extremely rare and after a difficult year, Gasly showed he can seize the moment when the chance arises. He’ll be one to keep an eye on in the final race of the year in two weeks’ time.

This will be the final column of my 12th full season writing for this little gem of a site, and as it has been every season since all the way back in 2008, it’s been a labor of love. On a personal note, it’s been quite the year with the birth of my first son, Theo, in May. He’s a race fan already; he just doesn’t know it. Thanks to my fellow writers for their terrific content all season long, especially the coverage of the final race weekend. And my sincere and humble thanks,to the editorial team who have to put up with my weird British-isms and strange word choices each week. Just as you have each season, you make my work better. Enjoy the offseason folks. We’ll see you in Daytona.

Thanks to Matt Crafton. It’s too bad that in Cup the winner of the final “event” of Brian’s product is allowed to be one of the Faux Four.

I say congrats to Joe Gibbs racing for thechampionship, but as an organization, theyfell flat. 2 of their 3 cars were eliminated by bone headed piy mistakes. A first, installing ALL 4 tires on the wrong side, second blocking all air to the radiater. They get a black flag in the pits.