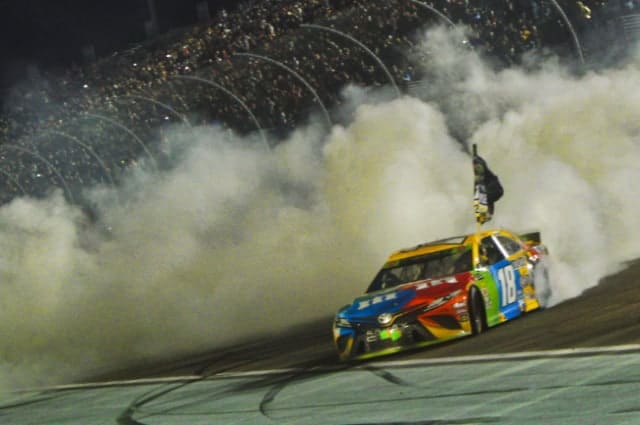 Well, the 2019 Monster Energy NASCAR Cup Series season is over, and Kyle Busch has won his second title, overcoming teammates Denny Hamlin and Martin Truex Jr, and Kevin Harvick of Stewart-Haas Racing, as they all had problems of one sort or another (documented elsewhere by my colleagues).

While Busch did run the full season this year, silencing the critics who complained of favorable treatment during his 2015 title run, the final Ford 400 at Homestead-Miami Speedway (the race will be sponsored by a vodka company next season) was the epitome of the rest of the year. That’s usually a good thing, but not when the race lacks excitement of almost any kind and whoever’s ahead is in another ZIP code than the rest of the field.

While Monster Energy will continue in NASCAR as a team sponsor, the company’s time as title sponsor has come to a close, which is an added frustration that the final event under their banner would be so anti-climatic, given their brand has been built on being edgy and thrill-seeking.

2019 was the year of Joe Gibbs Racing, as Busch, Hamlin, Truex and Erik Jones combined for 19 race wins, 27 stage wins, four poles, 61 top fives, 92 top 10s and 4,047 laps led. Ten percent of the field led around 40 percent of all the laps and won more than half the races on the schedule, including the Daytona 500 and the Southern 500. That dominance is impressive, but doesn’t necessarily make for the best viewing experience.

Then you add in their satellite team, Leavine Family Racing’s No. 95, where Matt DiBenedetto obliterated his career laps led total with 152 and two near-wins for an underdog operation, adding three top fives, seven top 10s and an average finishing position (18th) a full five places better than Kasey Kahne and Regan Smith combined for in 2018.

Bubba Wallace had another rocky season in his sophomore year at Richard Petty Motorsports. He averaged an invisible 24th-place finish en route to finishing 28th in the MENCS standings (out of 30 full-time drivers), recorded a single top 10 (third at Indianapolis) and was noticed mostly for unfortunate reasons: purposely spinning out at Texas, intentionally spinning his former boss Busch at Watkins Glen and splashing an ill Alex Bowman with Gatorade following the Charlotte ROVAL, in addition to complaining about alliance teammate Tyler Reddick‘s driving during the Daytona 500.

The best driver not in the JGR stable all year long was Kevin Harvick of Stewart-Haas Racing, who finished third in the standings for the third year in a row and the sixth time in his career. Since winning the 2014 championship, he has been a part of the title picture five times out of the six that it’s come down to a winner-take-all finale format.

Front Row Motorsports had a difficult year. David Ragan accounted for seven finishes inside the top 20, Michael McDowell drew the ire of other Ford drivers in the Daytona 500 and had a wrestling match after qualifying with Daniel Suarez after Phoenix, and Matt Tifft‘s rookie season was cut short for medical reasons.

When Ryan Newman took over the No. 6 Mustang at Roush Fenway Racing, it seemed like a puzzling lateral move, to say the least. Trevor Bayne and Matt Kenseth combined for five laps led and two laps led in 2018, with an average finish of 20th (Kenseth) and 24th (Bayne).

But while Newman didn’t set the world on fire — he only led 19 laps all season, a career low — he did greatly improve the No. 6 team, with three top fives and 14 top 10s, making the playoffs and averaging a 15th-place finish.

Austin Dillon was fast in qualifying, recording three poles, but that speed left his Richard Childress Racing No. 3 car by the time the green flag dropped. His average finish dropped a full two positions from 2018 (down to 19.5) and he went without a top five for the first time in his full-time Cup career.

He did come up with six top 10s with a best finish of sixth and lead a career-high 70 laps, but sort of lost his Dow Chemicals halfway through the season due to company reorganization and missed the playoffs, finishing 21st in the standings.

This weekend @DavidRagan makes his final full time cup start @HomesteadMiami . SMD had the honor of creating this special paint scheme inspired by his race winning 2013 @FarmRichSnacks car from @TalladegaSuperS . ?

Ragan is retiring from full-time racing after this year, and in his final race, Front Row had a tribute scheme designed like his 2013 Talladega wining car, which is a really amazing gesture and worthy of a Paint Scheme of the Week.

In his final race for Kyle Busch Motorsports, Todd Gilliland ran over and murdered a fox, which feels symbolically fitting somehow. There are pictures in the comments, but they’re pretty gross.

Ok ok time to get serious. Let’s talk for a minute about the contributions of the Menard family to racing

Wood Brothers Racing wanted to give a shoutout to Paul Menard ahead of his final race, and thank Paul, his father John and their company for their long support of a variety of racing formats. So what happened was a very long thread, which seems very classy.

Most of the 2020 Cup Series season will similar to this one, in the final year before the Gen 7 car in 2021. So the final four drivers batting for the 2020 title will be Busch, Harvick, and Truex, along with Joey Logano.

Custer will win the 2020 Rookie of the Year battle due to superior equipment, and flirt with making the playoffs. Also in playoff contention will be DiBenedetto in the No. 21, Buescher in the Roush Fenway No. 17 and Christopher Bell in the No. 95.

In the Xfinity Series, Ross Chastain will fight for the title with Briscoe, Justin Allgaier and Austin Cindric. These races will continue to be far more exciting than Cup.

The Gander Outdoors Truck Series crown will be battled for between KBM rookies Christian Eckes and Raphael Lessard, along with a ThorSport Racing veteran and new GMS Racing driver Tyler Ankrum.

Someone else will take over this column next season, as I will not be with Frontstretch in 2020. To cover motorsports adequately requires far more investment of time, energy and money than I can devote to it, and so I’ll be focusing more on entertainment/lifestyle journalism for the time being.

Thank you to my editors and fellow writers for being so fantastic to work with, and thank you, readers, for caring so passionately about NASCAR and racing in general.

You will be missed. Thanks you

Thanks Wesley. Best of luck in the future.