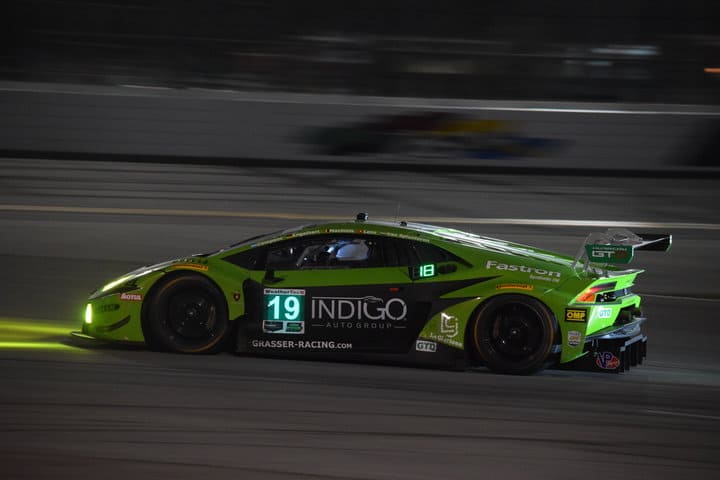 A part-time operation will go full-time in IMSA in 2020.  GRT Grasser Racing Team has partnered with GEAR Racing to field a No. 19 Lamborghini Huracan GT3 EVO full-time in the IMSA WeatherTech SportsCar Championship.  Katherine Legge and Christina Nielsen will team up for the full season in the GT Daytona class.

GEAR stands for Girl Empowerment Around Racing, a new initiative designed around the promotion of women in motorsports.  More information on this organization is forthcoming.  According to SportsCar365.com, they will provide sponsorship to the team and drivers.

The GRT Grasser Racing Team has raced part-time in IMSA over the last couple of years.  Whenever they’ve showed up recently, they’ve won.  They’ve won the GT Daytona class the last three times that they’ve entered an IMSA WeatherTech SportsCar Championship race.  That includes class victories the last two years in the Rolex 24 at Daytona.  Rik Bruekers, Mirko Bortolotti and Rolf Ineichen each have three consecutive victories in IMSA competition.  The No. 19 pictured above was GRT Grasser Racing Team’s second entry in the Rolex 24 at Daytona in 2018.

In Legge and Nielsen, the team has two drivers that proven their strength in GT Daytona competition.  Nielsen is a tw0-time class champion from her time with Scuderia Corsa.  Legge came within a whisker of the class championship in 2018 with Meyer Shank Racing with Curb-Agajanian.

In 2019, Legge drove the full season in the Caterpillar-sponsored No. 57 Acura NSX GT3 EVO for Heinricher Racing, an effort that was run by Meyer Shank Racing with Curb-Agajanian.  The original stated goal was that Legge would have shared the car for the full season with Jackie Heinricher.  Heinricher got hurt in a preseason testing crash and started the season on the bench.  Heinricher told Frontstretch at the Rolex 24 at Daytona that her goal was to return later in the season.  That never happened.

As a result, Legge had a series of teammates for the sprint races.  Nielsen, who was drafted into the program to sub for Heinricher, drove with Legge the most (eight out of 11 races, including all four Michelin Endurance Cup events).  Ana Beatriz, now racing under the name Bia Figueiredo, drove in six events (the four endurance races, plus Canadian Tire Motorsport Park and Road America).  Finally, Simona de Silvestro was the team’s fourth driver in the Rolex 24 at Daytona, while Alice Powell teamed up with Legge at VIR in August.

The constant driver switching led to an inconsistent season.  The team’s best finish was fourth in class at Watkins Glen in June.  Their best sprint race finishes were a pair of sixths at Canadian Tire Motorsport Park and WeatherTech Raceway Laguna Seca.