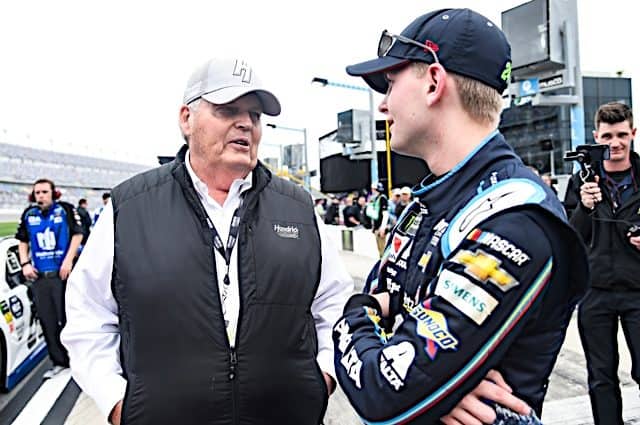 Hendrick Motorsports is the definition of a NASCAR team. Over its 35-year existence, the team has won 12 championships and over 250 races. Recently, the team has struggled badly, not placing a driver in the championship race at Homestead-Miami Speedway since Jimmie Johnson‘s improbable and potentially final title win in 2016.

The lack of presence up front from the winningest organization in NASCAR history has led to the question as to whether or not we should be worried about the future of Hendrick Motorsports. It’s Clayton Caldwell vs. Vito Pugliese one last time in 2019. Let the debate begin!

It’s More Than Just the Camaro

I believe for the first time in their history it is time to panic for Hendrick Motorsports. A lot of folks point to the Chevrolet Camaro as the reason that Hendrick has struggled over the last few years. However, I think Hendrick’s struggles go back even further than that. Let’s take a look at when their “struggles” started.

If you take a deeper look at the numbers, it gets worse. For the sake of time, I won’t do that. But the point is since 2016, the stats have dropped off significantly. Guess what? That’s two years before the Camaro even graced the track for a Chevrolet team. This problem is deeper than the Camaro.

One of the most underrated factors in NASCAR is that it is a people’s sport. Great people win championships, not great cars. It’s why you see some teams struggle when they buy equipment from a championship-caliber organization. They may have acquired the good equipment, but the people make the difference.

One of the most fascinating things about that is the organization has two of the longest-running crew chiefs in the business in Chad Knaus and Alan Gustafson. Knaus’ career as a crew chief began in 2001, and Gustafson was first on the pit box in 2005 with Kyle Busch. Of crew chiefs with competitive teams, only Rodney Childers and Greg Erwin have been around as long as Gustafson. No one has been around as long as Knaus.

With Knaus and Gustafson leading the way, is it possible that Hendrick Motorsports’ old ways are no longer working?

The other two crew chiefs on the team don’t have big resumes. In his five years on the box, Greg Ives has visited victory lane only four times. Cliff Daniels’ tenure with the organization has only been 15 races, but Jimmie Johnson’s finishes didn’t improve much after they made the switch from Kevin Meendering. Meendering was brought up to the organization from JR Motorsports and replaced Knaus, who left Johnson after 2018 when he was switched to William Byron‘s team. Meendering was fired after just 21 races.

Meendering’s quick hook makes you scratch your head about who else the organization has for the future. Notice how they went with a very unconventional move and hired Daniels, an engineer with no crew chief experience to take over the No. 48 team. They bypassed every crew chief at JR Motorsports.

Speaking of JRM, that organization struggled badly in 2019 as well, winning just two races and lacking speed all season long. Hendrick uses JRM as a breeding ground for its future employees. If that team is struggling, what does that mean for Hendrick’s future?

Let’s take a look at the driver situation, too. Hendrick used to have one of the most impressive lists of drivers in the garage area. Right now, they have a 44-year-old Johnson, who hasn’t won a race in over two seasons, Chase Elliott, who has been the lone bright spot for the organization, and Alex Bowman and Byron, both of whom are unproven.

The thing that scares me the most about this situation is the future. Johnson just announced on Wednesday (Nov. 20) that he will retire after the 2020 season. The biggest problem is there is no clear favorite to take over the No. 48 car.

Noah Gragson appears to be a few years away, and JR Motorsports recently signed Daniel Hemric, but he’s not a shoo-in for that ride at all. Remember when they signed Kasey Kahne a year before there was even a seat available? Hendrick always used to be a step ahead of teams when it came to hiring drivers. Now, they could enter the 2021 season with three unproven drivers and Elliott. Yikes.

That leaves the burning question: Is there something deeper going on at Hendrick Motorsports? Has Rick Hendrick lost his “magic touch”?Maybe it’s time for Hendrick to bring in someone from outside the organization in to help figure out the issues, because the internal options haven’t seemed to be helping the situation much.

Given all that, how can you not be concerned about the future of Hendrick Motorsports? – Clayton Caldwell

A Time of Transition — Not The Titanic

With Wednesday’s announcement that 2020 will be the final year for Johnson to compete full-time in the Monster Energy NASCAR Cup Series, it gives one pause for thought as to just where HMS stands within the NASCAR landscape.

Hendrick has for all intents and purposes been the New England Patriots of NASCAR for the last 25 years. From Jeff Gordon’s defining years in the mid-to late ’90s, Terry Labonte’s 1996 championship, coupled with contributions from the No. 25 team of Jerry Nadeau and Joe Nemechek, the team that made multi-car winning teams a reality and the norm in Cup seemed to be a perpetual force that rarely, if ever, stumbled. When Johnson joined the Cup ranks in 2002, he was instantly a force to be reckoned with, eligible for the championship under the “old” points system that was a cumulative year-long battle well into the final few races of the year.

Regardless of the generation of car, HMS has always been the team to beat. When the Gen-5 car debuted, Gordon and Johnson never skipped a beat. When Mark Martin came out of self-imposed part-time exile in 2009, he won five races at 50 years old and went down to the wire with his teammate for the championship. Dale Earnhardt Jr. got his mojo back before concussions cut his career short, Johnson scored a record tying seventh championship in 2016, and Elliott seemed poised to pick up the torch after both Earnhardt Jr. and Gordon exited for TV careers .

So to go two years in a row with no Hendrick car in the Championship 4 begs the question: What exactly happened?

There are some that will point to Gordon and Earnhardt Jr. leaving virtually at the same time. Resources were diverted to get Elliott up to speed and winning after finishing second seven times and not winning until his third season, as well as to get both Byron and Bowman up to speed in 2018. The effort even ended up bringing Knaus over to Byron for the 2019 season. This, coupled with significant sponsor changes, has seen one of the most stable outfits in the sport be in a whirlwind of transition the past few seasons.

Even with all the change that has been in motion, none of this is the true reason for the regression. I would pin virtually everything on the same thing that has hamstrung virtually every Chevrolet team the last two years, the change to the Camaro body. Remember it was at the 11th hour in 2018 that rule changes came down affecting the under-car aero that seemed to hamper the Chevrolet much more than the Mustang or Camry. A quick peak at the stat sheet will back this up. If you excuse Austin Dillon’s last lap Daytona 500 wreck-to-win move on the Ford of Aric Almirola, it wasn’t until August of last year that Chevrolet won its first race since Kyle Larson won Richmond Raceway in September 2017 — almost a year for the manufacturer that pins its legacy on success in NASCAR to even win a race.

And not just win one, try being remotely competitive in anything other than Talladega Superspeedway/Daytona International Speedway races.

2019 brought some new tweaks and a new package that took some getting used to for everyone. Perhaps for the first time in NASCAR history, the car on the track had significantly less horsepower than its showroom counterpart, and with it a lot more drag. The result? Seven wins, including three in a row for the Bowtie — but even that is a bit deceiving. Two of the wins were at Daytona and Talladega, with the Daytona win a rain-shortened event that was timed right by the “juggernaut” Spire Motorsports team of Justin Haley. Elliott scored another road course win at Watkins Glen International, while Bowman and Kurt Busch battled door to door in the closing laps to earn their wins for the year. The only Chevrolet to score a win in the playoffs was Larson at Dover International Speedway.

Other than that, not exactly a competitive year for Chevrolet. The Richard Childress Racing/Richard Petty Motorsports/Germain Racing trio of Camaros all pretty much ran within a few positions of each other all year, with the exception of Bubba Wallace’s standout performance at Indianapolis Motor Speedway.

No GM team has been able to show the consistent speed everywhere that Toyota or the Stewart-Haas Racing and Team Penske Fords have this season. I attribute this to a combination of the inherent deficits of the Camaro, as well as the short-lived lifespan of the current car configuration. Chevrolet teams also don’t exactly play as well together as the Ford and TRD teams do as far as sharing technology and information. 2021 brings about a new generation car that will share little in the way of similarities with what we’ve come to expect a NASCAR stock car to be the last few years.

Think more Australian Supercars than The Intimidator’s Lumina and you’ll start to get the picture.

Has Hendrick banked its future on getting a leg up on the new car configuration in what will be the most pivotal year for NASCAR since 1979 or 2001? Rick Hendrick didn’t get to the top of the mountain and stay there for three decades by mistake. His statement Wednesday that he was totally blindsided by Johnson’s decision to retire is best consumed with a liberal dousing of salt, as it has been rumored that the announcement was coming and he said himself the decision would be made shortly after the end of the season. There isn’t a decal applied to the Axalta painted fenders of his cars without his expressed consent. This too is just part of the transition process and the reshaping of HMS for the next decade. No team is immune to the ebbs and flows of motorsport at any level, be it Roush Fenway Racing or Scuderia Ferrari.

My prediction? The Chevrolet teams muddle along through 2020, with Elliott being a player deep into the playoffs. When the new configuration of car comes to fruition in 2021, I fully expect both Elliott and Bowman to be contending for wins and championships and the current TRD dominance will tempered greatly. –Vito Pugliese

Clayton has been writing NASCAR for the last seven years and has followed the sport for as long as he can remember. He's a Jersey boy with dreams of hoping one day to take his style south and adding a different kind of perspective to auto racing.
@cgcaldwell89
Previous Truckin’ Thursdays: The Storylines of 2019
Next Holding A Pretty Wheel: Evolution, Part III