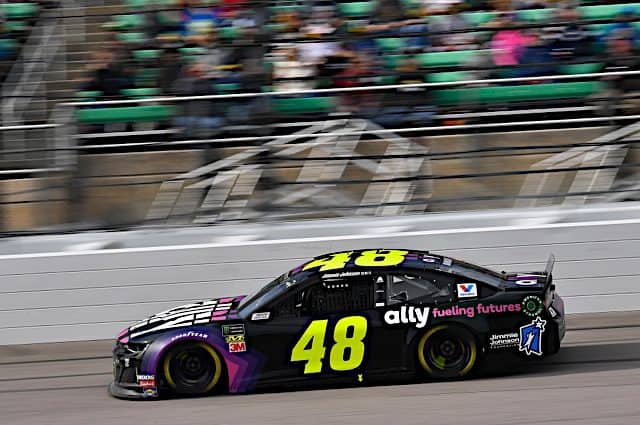 Did You Notice?: For Jimmie Johnson, 2020 Was the Right Time for NASCAR Retirement

Did You Notice? … For Jimmie Johnson, 2020 is the right time to call it quits. The seven-time Monster Energy NASCAR Cup Series champion announced Wednesday (Nov. 20) on Twitter next season will be his last.

Speculation about Johnson’s retirement has run rampant since primary sponsor Ally Financial announced a contract extension through 2023… that didn’t come paired with a driver. As recently as a few weeks ago, Johnson had left his options open, saying it would take “four to six months” before a decision was made.

“If I’m forced to make a decision, I’m choosing more years,” he said then on Dale Earnhardt Jr.’s podcast. “I’m not done yet. That fire is way too intense.”

But in the end, Johnson decided one more year is all he has left in him. The 83-time Cup winner will run his last full-time season in 2020, battling for that record-breaking eighth championship before hanging up his driving shoes at age 45.

“I’m so thankful for 18 incredible years of racing in NASCAR,” he said. “The sport has been good to me and allowed me to do something I truly love. I showed up chasing a dream and achieved more than I ever thought possible.

“I’m looking forward to next season and celebrating what will be my last year as a full-time NASCAR Cup driver. I know what this team is capable of, and I hope 2020 is one of the best yet.”

It’s also the last year with the current car, undoubtedly one factor in Johnson’s decision. NASCAR moves to the Gen-7 model in 2021, a completely different chassis he would need to master. Putting the front-end work for that would make it silly to retire in the Gen-7’s debut year. The timing of it made this decision feel more like 2020 or 2023, the current length of sponsor Ally Financial’s extension.

So Johnson chose an exit ramp, retiring at around the exact same age as some of the sport’s biggest stars. For every Mark Martin that defied Father Time, 90% of drivers these days are choosing to opt out in their mid-40s… or earlier.

AGE AT THE END OF LAST FULL-TIME CUP SERIES SEASON

Johnson also has one of the sport’s longest current winless streaks: he’s 0-for-95 since a victory at Dover International Speedway in June 2017. (Johnson did win the exhibition Advance Auto Parts Clash in February). Missing the postseason for the first time in his career, 2019 came bundled with career lows: average finish (17.4), lead-lap finishes (21) and points finish (18th).

You could say Hendrick Motorsports as a whole struggled along with Johnson. Chevrolet was shut out of the Championship 4 a second straight year as its Camaro model has failed to produce compared to Ford and Toyota. No HMS driver finished better than 10th in the standings, their worst performance since the team debuted in 1984.

But that also wouldn’t be entirely fair. HMS’ other three drivers made the postseason, and two of them, Chase Elliott and Alex Bowman, won races. William Byron, meanwhile, ranked second on the Cup level with five poles and was the highest-ranked HMS driver in points until blowing an engine in the series finale.

Johnson was the only one in that quartet to swap crew chiefs midseason, an unprecedented move once it was clear Kevin Meendering wasn’t working out. Replacement head wrench Cliff Daniels reinvigorated the team, but it wasn’t enough to save a faltering playoff bid. It also didn’t fully correct the problem. Better speed was counterbalanced by three wrecks in the final six races, crashes ruining what otherwise was a solid three months for Johnson.

Reversing all of that over the long-term takes work. Mastering the Gen-7, especially for an HMS team that has fallen behind, would take a three-year commitment. Understandably, Johnson doesn’t feel he’s at the point in his life where he can provide that. What more does this champion have to prove? He’s won under every NASCAR playoff format since the Chase was put in place for 2004. Five straight titles in the modern era is a streak that may never be broken. And HMS is in good hands with talented young drivers who can take the company forward. Former crew chief Chad Knaus has even found himself a long-term home coaching Byron to success at the No. 24.

If Johnson was going to bail, the time was now. And the hope for him is that with limited rule changes next season, the emotional momentum of his final year will carry HMS up a level and over the finish line. A new Camaro model is expected to boost its success, and you’re bound to see more resources lined up toward the No. 48 team in its final year. (The question is how good the Johnson-Daniels combination will ever get. Remember how long it took to perfect Johnson-Knaus?)

The move also keeps Johnson from tarnishing his track record too badly in the event 2020 goes south. Remember how Darrell Waltrip and Richard Petty suffered through eight winless seasons apiece? Three at the end of Johnson’s career would pale by comparison, keeping him more in line with drivers like Cale Yarborough or Martin. It’s a more forgivable timeline in terms of figuring out it’s no longer your time.

The bottom line now is Seven-Time has given himself one last opportunity to go for eight. It’s the last moment we’ll see that NASCAR record challenged for decades, not unless the playoff format gets significantly altered. So can Johnson muster up one last bid and have Lady Luck go his way just enough to sneak through to the Championship 4? Jeff Gordon laid the groundwork for that in 2015; we’ll see if Johnson can replicate that impressive run through a final season five years later.

Did You Notice? … There’s no good option in the Hendrick development stable to replace Johnson at the No. 48? Silly Season for 2021 starts now as it seems any replacement for Johnson will come externally.

Just look at JR Motorsports’ current roster for 2020. Daniel Hemric has come on board, yes, but the reigning Cup Series rookie of the year hasn’t won a national series race. Justin Allgaier, despite being a sentimental favorite, is likely considered too old (he’ll be 34 years old in February 2021). Noah Gragson and Michael Annett? It’s not even worth the discussion.

That puts Chevrolet’s top team on the lookout for poaching someone else’s talent. Kyle Larson has been rumored to HMS on and off for years; will this ride trump his loyalty to Chip Ganassi Racing? How about the logjam at Joe Gibbs Racing, a place where it’s had to farm out Christopher Bell since there’s no room in its four-car organization? Could someone within the JGR camp get poached (Bell himself would be unlikely) in a deal that makes room at the inn for its prized prospect?

Team Penske would appear to be a total longshot, but hey, you can’t count anyone out. Ryan Blaney has underachieved at times driving the No. 12 Ford, and Elliott is one of his best buds. Brad Keselowski has a former relationship with HMS and stumbled through the 10-race playoff.

The bottom line is that finding Johnson’s replacement will almost certainly topple over another major domino. After a below-average Silly Season this year, expect the 2020 version to emerge red hot.

The author of Bowles-Eye View (Mondays) and Did You Notice? (Wednesdays) Tom spends his time overseeing Frontstretch’s 30 staff members as its majority owner. Based in Philadelphia, Bowles is a two-time Emmy winner in NASCAR television and has worked in racing production with FOX, TNT, and ESPN while appearing on-air for SIRIUS XM Radio and FOX Sports 1's former show, the Crowd Goes Wild.
@NASCARBowles
Previous Jimmie Johnson Retiring After 2020 NASCAR Season
Next NASCAR Announces 2020 Drive for Diversity Class