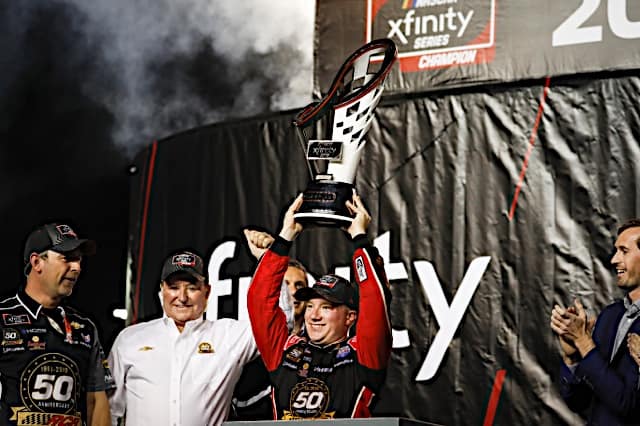 In this week’s edition of the Frontstretch Podcast, Dustin Albino and Mike Neff discuss the championship weekend at Homestead-Miami Speedway that saw Kyle Busch, Tyler Reddick and Matt Crafton be crowned NASCAR champions.

Busch came in as a slight underdog for the Monster Energy NASCAR Cup Series title, snapping a 21-race winless streak in the process. Reddick had an epic battle with Christopher Bell and Cole Custer late in the race en route to the NASCAR Xfinity Series title, while Crafton didn’t win all season, but was crowned Gander Outdoors Truck Series champion.

Albino and Neff dig deep into each of the three races and give our opinions on each of them representing the sport.

As for Denny Hamlin and Martin Truex Jr., it’s what could have been. The No. 11 team made a mistake by putting too much tape on the grille on the last pit stop, while the No. 19 team switched up the left and right side tires in stage 2. Was it just these mistakes that cost each team the championship?

Daniel Suarez is out at Stewart-Haas Racing, as the team has elected to go with the proven Custer. Was that the right decision even though Suarez was going to bring in millions of dollars in sponsorship?

Finally, Albino was with Reddick on Wednesday (Nov. 20) at Universal Studios in Orlando for Champion’s Day. While there, the duo chatted about what it means to be a two-time champion, racing for the title against his two nemesis and what it will be like battling Bell and Custer next year in Cup.

(This podcast was taped prior to Jimmie Johnson announcing he will be retiring from full-time competition following the 2020 season. Albino and Neff will chat about that in an offseason podcast.)