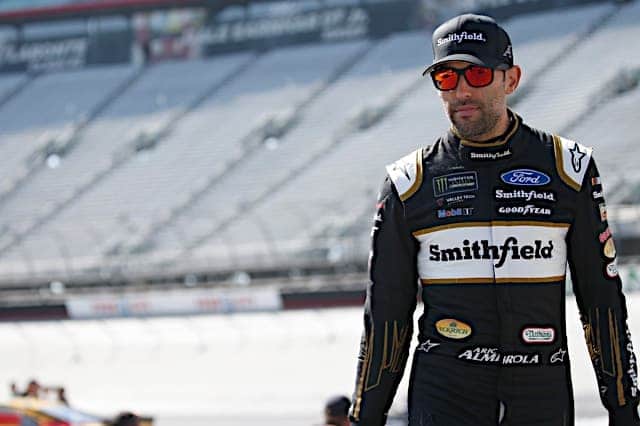 Kyle Busch was cruising to the victory and the Monster Energy NASCAR Cup Series championship. He had a large lead in the closing laps at Homestead-Miami Speedway on Sunday evening (Nov. 17) when he approached what was supposed to be the biggest threat to his title hopes: Aric Almirola.

Busch and Almirola had collided with each other three weeks earlier at Martinsville Speedway, knocking the No. 10 Ford out of the race. Almirola was not happy with Busch after the incident and said in his interview with NBCSN afterward he was going to make the last three races hell for the now-two-time Cup champion.

"I'm going to make it hell" for Kyle Busch.

Aric Almirola has a message for the driver of the No. 18. #NASCARPlayoffs pic.twitter.com/pLuoYt5lo9

But when Busch went to put the No. 10 a third lap down with four laps left on Sunday, Almirola gave the No. 18 plenty of space, allowing Busch to drive obstacle-free to the championship. Almirola didn’t turn him, he didn’t door-bang him, he didn’t even pinch Busch down. Almirola certainly didn’t do anything to make Busch’s life hell during the last three races of 2019.

This came even after Almirola’s employer, Tony Stewart, backed him up and essentially said his driver better do something to Busch since he promised to.

Almirola’s lack of retaliation led me to think maybe Busch had reached out to Almirola and patched things up to him in the past few weeks. After all, Almirola’s one of the nicest guys in the garage, and he’d probably forgive someone if they reached out with a sincere apology. I asked Busch in his press conference after Homestead if that was the case, and it was not.

“I did not, no,” Busch said. “I didn’t reach out to him or anything. I just thought it was a Martinsville thing. I spent time and laps of working him over and trying to get by him cleanly, and I did that, and the first time he got back to me on the next run, he just ran over me and he crowded me and we got together. That’s Martinsville. That stuff happens.

“There was a couple moments I thought he would maybe try something or whatever, but Texas [Motor Speedway], we saw each other for like five laps, and then I never saw him again because he drove away. And then [ISM Raceway], I don’t remember — I think we were around him a couple times, and he was — I don’t remember what was happening.

“And then [at Homestead], I had to put him a lap down there towards the end of the race, and he was fine. I think that that’s respect, for one, because even other guys that I had issues with, Bubba [Wallace] waved me by, [Ricky] Stenhouse [Jr.] waved me by, these guys that you would think are going to make your life hell, in the championship moment, they know what that race means, and I would do the same.”

Busch was referring to his run-ins with Wallace at Watkins Glen International and Stenhouse at Charlotte Motor Speedway earlier this year. Busch also had a feud with William Byron at Watkins Glen this year, but none of the aforementioned drivers did anything to stop him from winning the championship, and for good reason. Busch didn’t do anything severe enough to those drivers to warrant screwing him out of the championship, and Wallace, Stenhouse and Byron didn’t vow to do anything to keep Busch from winning the title.

But Almirola did, and he didn’t live up to his word despite Stewart’s direction.

Almirola isn’t the first or last driver to avoid retaliating in the playoffs, though. Just last year, after being bumped out of the way by Joey Logano for the win at Martinsville, Martin Truex Jr. said Logano wasn’t going to win “the damn war.” Fast forward to a few weeks later at Homestead, and Truex hardly contested Logano as the No. 22 passed him late to win “the damn war” aka the championship. Truex did nothing while the championship was taken away from him by someone he was already mad at, despite his promise to do otherwise.

So why is it that these drivers act like Mr. Tough Guy one week and won’t do anything the next? In many cases, it’s because they say these things in the heat of the moment. Said driver has just been roughed up and gets a microphone shoved in their face right after getting out of the car. By the time a week or two has passed, the angry driver has cooled off and doesn’t think the payback is worth it.

But a factor that can’t be overlooked when promised retaliations don’t happen in the playoffs is the Matt Kenseth effect. Ever since Kenseth was suspended for two races after intentionally wrecking Logano at Martinsville (why does it always happen at Martinsville?) in 2015, I have to believe most drivers are scared to do any such thing to a playoff driver. That set a precedent. Prior to the Kenseth incident, we saw Carl Edwards and Brad Keselowski in 2010, Jeff Gordon and Clint Bowyer in 2012 and Kenseth and Keselowski in 2014 all have violent feuds in the playoffs that resulted in no suspensions.

But since NASCAR threw the book at Kenseth, I’m sure teams make an even more concerted effort to cool off their drivers and make sure they don’t retaliate. I’m not advocating for any driver to do what Kenseth did — he crossed the line (as did Gordon and Edwards with their intentional wrecks a few years prior, but NASCAR would never have suspended them). But there are still ways a driver can retaliate without doing it as blatant and disgusting as Kenseth did it. The way Chase Elliott ran Denny Hamlin into the wall at ISM in 2017 was perfect. All it did was cause just enough damage to create a tire rub, ruining Hamlin’s chances at the title. I’d wager Hamlin learned from that move and used it almost identically on Logano at Martinsville this fall, causing the No. 22’s tire to go down. Hamlin said he was going to race Logano harder after the 2018 Cup champion raced him super hard while 20-plus laps down at Dover International Speedway, costing Hamlin the lead and eventually the win.

So while I’m glad Truex and Almirola didn’t blatantly wreck Logano and Busch, they could have easily lived up to their promises by racing their rivals harder, giving less space and doing a little rubbing. Instead, they made a promise to the fans that they did not keep.

Don’t get me wrong, I have so much respect for Almirola and Truex — they truly are two of the nicest guys in the Cup garage and great racecar drivers. To see both of them that angry shows just how wronged they felt in their respective situations. And while I’m glad they each voiced their displeasure, They did more harm to their reputations by saying they were going to do something and then not doing anything. It makes them seem like pushovers to the fans and other competitors in the garage.

That’s why it was such a huge moment in the career of Byron when Chad Knaus basically commanded him to stand up for himself after Busch dumped him at Watkins Glen. Yes, Byron’s payback attempt backfired horribly, but he showed that he would stand up for himself in those situations.

Almirola also needed to get back at Busch for the sake of entertainment. The racing in the last three weeks of this season — at Texas, Phoenix and Homestead — absolutely sucked. Just think how much more entertaining any of those races would have been had Almirola made things harder on Busch. Instead, we were stuck with two races where nobody could pass and a championship race where 36 of the competitors were scared to race the Championship 4. Who wants to watch that?

NASCAR’s playoffs are supposed to be unique in that the cars that didn’t make it into the postseason are still on the track, racing for wins. Instead, those other cars don’t want to interfere, so they don’t race the playoff drivers as hard. That, combined with this year’s atrocious racing package, resulted in some very boring racing at ISM, Homestead and a few other playoff races this year.

One of the most iconic races was the fall 1989 North Wilkesboro Speedway race when Ricky Rudd and Dale Earnhardt battled tooth and nail over the race win. Earnhardt was in the midst of a championship battle and Rudd was not, but that did not stop two drivers who did not like each other from going all out. Eventually, the two made contact and spun, yielding the win to Geoff Bodine. This made it a race for the ages and a finish that would never happen in today’s playoffs.

While the respect the other drivers showed Busch on Sunday was classy on their part and will help in earning his respect, it’s not entertaining. I don’t know if it’s something NASCAR or the teams are telling the drivers or some kind of code the drivers came up with on their own, but this lack of retaliating, and even racing, against the playoff drivers needs to go for the sake of entertainment. Because sports are, after all, meant for entertainment.

Of course, there are many more aspects that make stock car racing great aside from feuding drivers, but this aspect becomes the focal point when one driver threatens payback on another driver — it gets the fans’ hopes up.

So I agree with Stewart: drivers, if you’re going to threaten payback, then please actually deliver — not just for your reputation’s sake, but for the sake of the fans.

8 thoughts on “Massie’s Minute: Why the Empty Threats in Cup Playoffs?”