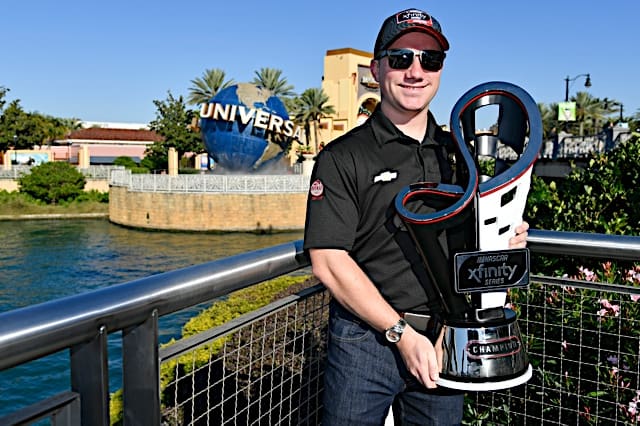 Reddick, 23, remains the only driver to experience the thrill of rollercoasters and butter beer as a reward for winning the Xfinity title. In 2018, Comcast also celebrated the series champion at Universal after the California native upset the likes of Christopher Bell, Cole Custer and Daniel Hemric at Homestead-Miami Speedway. Reddick entered that championship race as an underdog; this time, he defeated Bell, Custer and Justin Allgaier to go back-to-back.

The activities at Universal were champion’s choice, and Reddick chose to start at the Islands of Adventure. Tour guides Dani and Drew directed Reddick and crew (cast of Comcast executives, marketing team, media and sweepstakes winner(s)) to Skull Island: Reign of Kong. From there, it was time to encounter The Incredible Hulk Coaster before heading to The Wizarding World of Harry Potter — Hogsmeade.

While there, it was time to test out a fan favorite (and beat out a three-hour line thanks to a Universal Express Pass) in Hagrid’s Magical Creature Motorbike Adventure. Next up, Reddick chose to visit a Universal favorite; Harry Potter and the Forbidden Journey. That section proved to be top-notch, in particular Diagon Alley.

Overall, Reddick enjoyed his time at Universal Studios. The hardest part was figuring out which rides he could stomach.

“A lot of fun,” Reddick told Frontstretch of his time at the park. “I figured out what my limits are on what rides I can enjoy and what rides my body won’t let me enjoy. It’s been a lot of fun. Got to see some new things, got to go on some very sought after rides between the Hulk, Hagrid’s Motorcycle Adventure, all of that.”

Before departing for an afternoon media session, it was time for lunch. Then, Reddick enjoyed Diagon Alley a bit more before signing autographs in the theme park. More than 100 tourists — including many race fans — got an autograph from and a picture with the NASCAR Xfinity champion.

Heck, the theme park even threw a parade for Reddick.

(The park literally had a parade just for Reddick… really cool). #NASCAR pic.twitter.com/mB4UH5BHs6

XfinityChampionship.com Sweepstakes winner Ron Mattingley also attended championship weekend at Homestead in VIP fashion through Comcast. Social media winner Chris Allenam tagged along for the tour as well, getting to experience the excitement of Reddick’s title celebration up close. Both are big race fans, making this experience to Universal that much better.

“I’m a NASCAR enthusiast from the 1970s, so I just kept going and got more involved with Xfinity,” Mattingley, an Illinois resident, said. “I saw this happen to come up online [sweepstakes]. I hardly ever do it, but I thought ‘I’d do it,’ so I did.

“All of a sudden, about a week and a half before the race they called me up and I thought, ‘This is a hoax.’ So I checked online with everything and found out, ‘OK, this might not be.’ We flew out of Bloomington, Illinois to come down here to Miami to watch the race and they brought us up to Orlando.”

Allenam, on the other hand, is an Orlando resident. When the sweepstakes began on Oct. 24, he reached out to the @XfinityRacing Twitter handle, joking the company wouldn’t have to pay for his travel costs since he’s from town.

Following the season finale at Homestead, Bryan Mapes (the man behind the @XfinityRacing handle) remembered those tweets. He then surprised Allenam through a Reddit post with VIP tickets to Universal.

“I had posted a comment like, ‘Oh, if I won it would be great because I live in Orlando and you wouldn’t have to pay travel costs,'” Allenam recalled. “Just as a joke, and I guess the social media guy had saw that and remembered that and when he found out that he had the extra two VIP slots, he messaged me on Reddit and asked if I would want to take them.

“Of course I said yes, because you cannot pass up an opportunity like this. It was so amazing and I am so appreciative.”

It’s the latest selfless gesture from Xfinity, whose NASCAR partnership has been defined by examples that put race fans first. Over the 33-race schedule this season, Xfinity has granted NASCAR fans a total of 1,454 hot passes for Xfinity and Cup Series races via Twitter, Instagram and Reddit alone.

Though an Orlando resident, Allenam hadn’t been to Universal in quite sometime. Allenam, however, found out just two days before the event at 6:30 p.m. ET, meaning he’d have to call off from work. His boss gave him the nod.

“I told my boss, ‘Look, I need the day off’ because I told him what was going on,” Allenam said. “I was like, ‘If you don’t let me off, I’m going to quit because I have to go to this.’ He said, ‘Don’t worry, don’t worry, it sounds really cool, you can have the day off.'”

He never thought he would ever be causally hanging out with a NASCAR driver.

“This is like a once in a lifetime thing,” he said. “I kid Steve [Workman, Allenam’s friend that accompanied him to Universal] that I never win these kind of things. I had to do a double take when I read the message, ‘This cannot be real.’ It’s been amazing and I never thought I would get to hang out with a driver like this.”

Before the event was even over, Comcast representatives were wondering how to make the celebration even bigger and better for 2020. That would mark the third straight season the champion is honored with a day of fun at Universal.

See you for the threepeat parade next year! pic.twitter.com/co9uyZ2AJ6

Matt Lederer, executive director of partnership marketing at Comcast, believes this event was a great touch to end the 2019 Xfinity season.

“Champion’s Day was a success,” Lederer said. “To be able to celebrate the great season that Tyler had at a Comcast theme park is a fitting way to end the season. The media coverage and social media activity on that day provide much needed exposure to the NASCAR Xfinity Series, Tyler and Universal Orlando Resort.

“I think there is an opportunity to have Champion’s Day become an even bigger media event for the NASCAR industry.  With the tremendous setting that Universal Orlando Resort provides, there’s opportunities to introduce the great sport and the amazing theme park to an even larger audience.”

The trip to Universal is Comcast’s latest venture of a long-term commitment to increase exposure for its series. The annual Xfinity Takeover in Philadelphia is a prime example but there’s also Comcast Cares Day, the Community Champion of the Year, the Dash 4 Cash and other extracurricular activities the company provides to involve the NASCAR community off track.

Those initiatives provide a solid foundation as Xfinity continues to invest in the sport entering 2020.

Editor’s Note: This article is posted in collaboration with an outside sponsorship client.