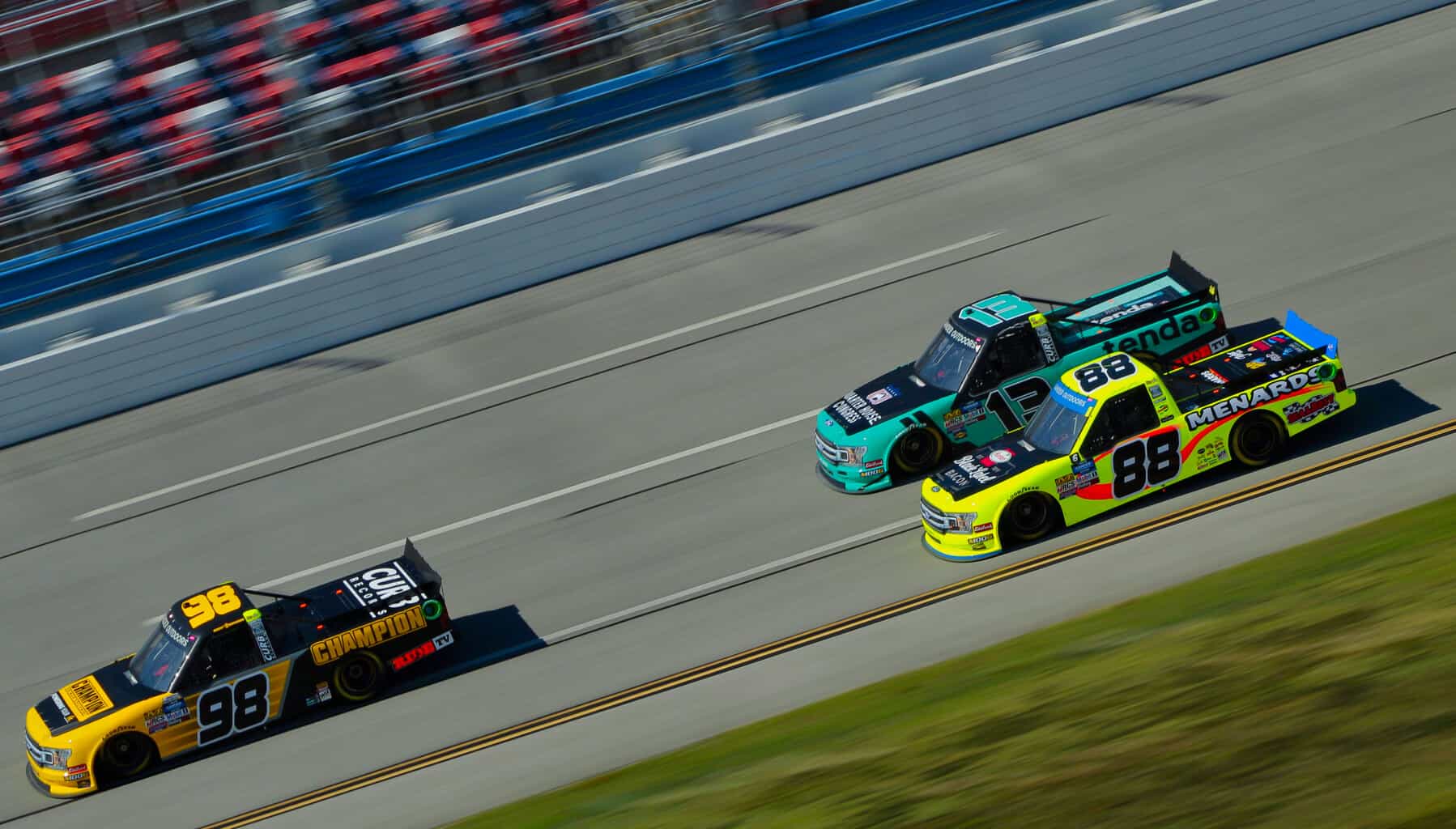 2019 was the first year the NASCAR Gander Outdoors Truck Series utilized the spec engine package. It was a direct challenge to one of racing’s modern ideologies: “How fast can I go? How big is your checkbook?”

Since the second car was produced and people started racing against each other, people have tried to squeeze more horsepower under the hood. That pursuit of speed has resulted in an enormous expense for race teams, turning championship teams into bankrupt auction steals.

NASCAR’s latest attempt to try to rein in those expenses came through implementing these spec engines; Ilmor produced them for the Truck Series in 2019. While there is talk about it going further up the chain, it has been passed down from all manufacturers that, should a spec engine get tried in the NASCAR Cup Series, they will pull out of NASCAR altogether.

So with spec engines limited in scope as of now, the real question is, are they working? Is it even worth trying to convince others going forward they should be used in the Xfinity and Cup series?

The Truck Series is the most visible one that utilizes spec engines for NASCAR, but they are also employed in the Whelen Modified Tour, Pinty’s Series and K&N Series. With the consolidation of ARCA and K&N in 2020, they will be utilizing a spec engine for their competition as well. The theory behind them is that a team can purchase an engine from a certified supplier, bolt it into their vehicle and go racing. You save money with no research and development costs for motors, reduce expenses from frequent engine rebuilds and, in theory, provide more consistent reliability.

It’s that last point that came to a head as the Truck Series season wore on. Multiple teams had engine issues in 2019, but the most visible were from a championship contender, Thorsport Racing. Those problems came to a head at Las Vegas Motor Speedway in September, when three of its four trucks had engine failures during the event. Ilmor, which provides spec engines for the series, recalled all 32 it supplied after the race for further investigation.

Las Vegas wasn’t the first instance of Ilmor issues for Thorsport during the season; it was just the most glaring. The end result ultimately knocked two of their teams out of the final six in the Truck Series playoffs. Considering the large amounts of money at stake, losing out due to a part failure, in particular one specified by NASCAR, is a bitter pill to swallow.

The durability issues caused an appeal by Thorsport to reinstate its two drivers, Grant Enfinger and Johnny Sauter, back into title contention. NASCAR denied its effort but it didn’t stop the organization from speaking out.

“People keep bringing up that we choose to run them,” David Pepper of ThorSport Racing said of Illmor’s NT1 engine in October. “Well, not exactly. That’s not entirely accurate. We are presented the NASCAR Ilmor motor and it is the motor of preference because the rules have been changed several times to impede the built motor.

“You cannot be competitive and win with that built motor (from a source other than Ilmor). They’ve cut RPM. We’ve changed the gear rule.

“I want to make sure that everybody understands there are reasons why we are forced into running that. It’s not by coincidence that everyone ran the Ilmor but one or two trucks (at Vegas).”

To be fair, there is discussion among people around the garage there was some experimentation going on by Thorsport that may have contributed to its troubles. But the bottom line is these spec engines are supposed to be more durable for all who run them. Losing three within one organization, especially during an elimination race, is difficult to stomach.

A common supplier ultimately requires fewer rebuilds and therefore reduces a team’s engine budget. Part of that reduction comes at a significant initial cost, which involves modifying the vehicles to handle the engine, the telemetry and some other aspects of the program.

I spoke with some members of the Race Team Alliance, all of whom requested anonymity for this article. The consistent theme from all of them is the initial outlay consumes much, and in some cases more, than the financial savings in the first year of implementing the spec engine program. Some of that telemetry and other ancillary additions to the vehicles seem to be redundant, as well, in looking at the data retrieved through the systems. While Ilmor is the sole source of the engine and has some proprietary elements to their program, adding these expenses seems like an unnecessary burden.

Laying all the cards on the table, there are two camps in the spec engine world. There’s a side who thinks they are a legitimate cost savings for teams, leading to fewer barriers and new entrants. Truck Series entry lists appear to back that up, the only one of NASCAR’s top three series to experience an ownership increase.

Then there’s the side who thinks the program impacts the sport negatively, doesn’t provide financial savings and truly undermines the individuality of the sport. It feels like NASCAR manufacturers do a fine job of straddling that line. Its nudge toward Ilmor’s participation shows it appreciates the effort; at the same time, all three made clear in November having their own engine brand remains crucial to success.

“The heart and soul of the racecar is the engine and the body,” said Mark Rushbrook, global director for Ford Motorsports, at Homestead-Miami Speedway. “That’s where the focus has been for the next-gen car, to make sure that we keep our own brand engines and our own independence there in that development of those engines and in the body and the shape and the styling and the aero performance of that body.  And we expect that to continue.  That’s why we’re in racing.

“If it gets to the point I think for any of us as manufacturers — if there’s no relevance for the manufacturer, then we’d just be in it as a sponsor, then we don’t have that same connection like we do today.”

That last part of this story tugs the most at the hardcore racers in the garage: crew chiefs and engineers. These mechanical masterminds work night and day to try and find a tenth of a second, fighting for an edge in a world where parity is paramount. They meticulously pour over their racecars to make sure every I is dotted and T is crossed. When a significant portion of that equation, the engine, is taken from their hands, it causes some trepidation among the troops. Distrust toward the sanctioning body on its decision making is never a good thing.

But accepting change takes time; the first year of this system was always going to come with bumps and bruises. In the end, the folks at Ilmor have produced pretty consistent engines in the ARCA world for years. Much of the 2019 season, outside of that playoff race, saw the majority of Truck teams make it through without engine issues.

That said, going forward any failure is going to draw some intense scrutiny when the selling point of the program is increased reliability. And this program, while not making its way up the ladder, serves as a test case for larger changes. I’d expect to see some very large magnifying glasses pointed at the suppliers for a year or two after the Gen-7 model hits the track in the Cup Series. While the engines will not be spec in 2021, much of the rest of the car will be.

My preference would be for NASCAR to set parameters (bore, stroke, cubic inch, camshaft profile, etc) and let each manufacture build their own version of a “spec” engine. A large part of NASCAR is brand loyalty, and I have no interest in watching a race with a Ford that is powered by the Chevy-based Ilmor engine. NHRA has ruined the once great Pro Stock class by making it so only Chevrolets are competitive. Now they even allow other makes to compete with a Chevy engine. How can they continue to call the class Pro STOCK? Erica Enders’ owner built a Mustang to add some variety to the 99% Camaro field….but it runs a Chevy engine!

Why do we need a bio of how great the author of article is? It”s tagged on about every article that is written nowadays.
Oh, it’s the “all about me” thing again.
Who gives a damn about the guys that write this stuff, its NOT about them.
I thought Mike Neff was a tuner in NHRA. I didn’t realize how great he was in the journalism world.