Stewart Friesen Remaining in Truck Series, Moving to Toyota in 2020

Halmar Friesen Racing will remain in the NASCAR Gander RV & Outdoors Series in 2020, though the team will have a slightly different look.

Stewart Friesen remains the driver of the No. 52 full time, and Tripp Bruce remains its crew chief. Gene Nead, meanwhile, will be its competition director.

“Through this transition, we’ve been able to retain several members of our team from last season,” Friesen said in a team release. “They’ve remained loyal to us and have new energy going into 2020.”

After a previous partnership with GMS Racing while with Chevrolet, HFR will purchase trucks from Kyle Busch Motorsports for 2020.

Next season will mark Friesen’s third full-time year in the Truck Series, following a pair of part-time runs beginning in 2016. He has two wins — both coming in 2019 — 23 top fives and 37 top 10s, and Friesen finished fourth in points in 2019.

Rutherford is the managing editor of Frontstretch, a position he gained in 2015 after serving on the editing staff for two years. At his day job, he's a journalist covering music and rock charts at Billboard. He lives in New York City, but his heart is in Ohio -- you know, like that Hawthorne Heights song.
Previous 2019 NASCAR Top Storylines: Young Guns Remain Shut Out of Championship Finale
Next Corey LaJoie Returning to Go FAS Racing for 2020 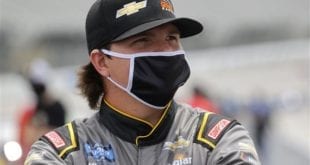