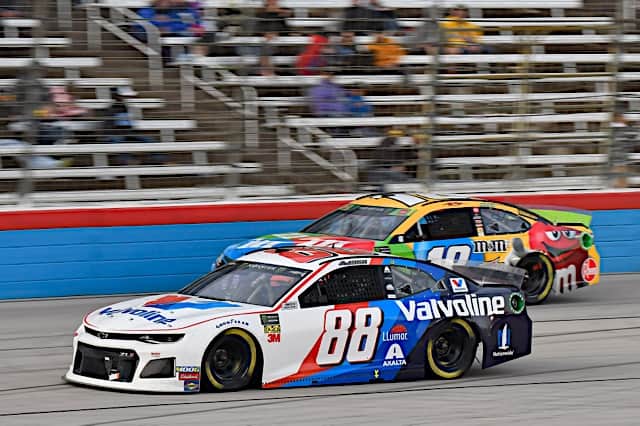 The beginning of the 2019 NASCAR Cup Series season marked the end of Alex Bowman‘s transition period into the No. 88 car.  Now acclimated with his new job and new team, the Arizona native hoped to earn his first Cup victory and a second straight trip to the playoffs.

Bowman accomplished both of those goals and improved on his top five and top 10 totals from 2018.  While success in the postseason was fleeting for the No. 88, Bowman’s 2019 season was a positive step forward.  He went from simply the guy who replaced Dale Earnhardt Jr. to a driver who could lead laps and contend for race wins.

The early weeks of the season were rocky for Hendrick Motorsports, and Bowman was no exception.  Through the first nine races of 2019, the No. 88 team never cracked the top 10 – though, other than a crash at ISM Raceway, Bowman managed to avoid any finishes of 25th or worse.

Middling results were not enough to keep him in playoff position, though.  After the spring race at Richmond Raceway, Bowman was 27 points below the playoff cut line, 21st in overall points and last among the four Hendrick drivers.  If Bowman was going to return to the playoffs, he needed to show a little more speed.

It turned out that the Easter off-weekend was just what the doctor ordered for the No. 88.  Bowman came back with guns blazing, posting three second-place finishes in the next three races.  The first second place came at Talladega Superspeedway, where Bowman pushed teammate Chase Elliott into the lead with four laps to go.  Bowman maintained his position until a crash on the backstretch ended the race under caution, preventing the No. 88 from making any last-ditch attempts to pass the No. 9.

A week later at Dover International Speedway, Bowman flexed his muscle by driving to the front of the field on a day where passing was difficult.  He fought a hard battle with Martin Truex Jr. and Kevin Harvick for the second stage win, but Truex took the lead and the stage win from Bowman on the final lap. In fact, Truex proved to be too fast for anyone to keep up.  Bowman had to settle for second again.

The next week at Kansas Speedway, Bowman ran another strong race but experienced his toughest defeat.  The No. 88 took command of the race in the third stage and held the lead for 50 laps.  Later, Bowman prevailed in a battle for the top spot with Elliott and Ricky Stenhouse Jr.  Once Bowman took the lead, he still had to fend off challenges from Brad Keselowski and Erik Jones, both of whom had fresher tires.  Keselowski swept past Bowman with eight laps to go, only to have a caution come out four laps later, giving the No. 88 one last opportunity.  However, Keselowski got the jump on the overtime restart, sealing the win and leaving Bowman in second place once more.

It wasn’t until visiting Chicagoland Speedway at the end of June when Bowman finally broke through to earn his first Cup victory.  Bowman and Kevin Harvick had by far the best cars of the day, and when Harvick hit the wall on lap 172, Bowman found himself with another great chance to win.  But Kyle Larson was in the mix as well, and over the course of the long green-flag run that ended the race, the No. 42 was able to track down the No. 88.

The two drivers had a spirited battle for the win.  Larson spent lap after lap trying to work his way past Bowman before completing the pass with eight laps to go.  But Bowman was not done.  Two laps later, he passed Larson right back and held on all the way to the checkered flag.  After several close calls, Bowman was finally a Cup winner.

Never. Give. Up. #NASCAR pic.twitter.com/brx3ZAcwSM

In fact, the timing of Bowman’s first win could not have been better.  The victory effectively locked him into the playoffs, which was good for the No. 88 team, because it struggled through the rest of the regular season.  Just like the beginning of the year, Bowman managed to avoid bad finishes but did not have enough speed to contend for any more wins.  His only top-10 finish in this stretch of races was a 10th at Michigan International Speedway.  As a result, Bowman slipped from ninth to 12th in overall points by the time the playoffs began.  His only playoff points were the five he earned from winning at Chicagoland, putting him in a significant hole compared to the top championship contenders.

Perhaps because of his points deficit, Bowman drove an aggressive first round of the playoffs and ruffled a few feathers along the way.  At Richmond, Bowman found himself racing for the free pass position early in the second stage.  Attempting to pass William Byron and Austin Dillon, Bowman slid up the track and sideswiped Dillon, leading to the No. 3 making additional contact with the No. 24.  Displeased with Bowman, Dillon spun the No. 88 in turn 3 on the next lap.  Bowman managed to keep his car off the wall, commenting on the radio about where within Dillon he wanted to “shove that silver spoon he’s been fed on his whole life.”  Bowman ended the night in 23rd place, dropping him to 13th in points but just two below the cut line.

The No. 88 needed a good run at the Charlotte Motor Speedway ROVAL to stay in playoff contention.  Starting at the rear of the field in a backup car, Bowman spun through the backstretch chicane on the first lap.  He managed to avoid any serious damage, but contact with the No. 43 car drew the ire of Bubba Wallace.  Bowman also spun out during a multi-car incident just before the end of the first stage that cost the No. 88 team all of its track position.

On lap 42, Bowman found himself stuck behind Wallace’s Chevy.  Angered by both the No. 43’s aggressive blocking and a middle-finger salute from its driver, Bowman lost patience.  Upon exiting the backstretch chicane, Bowman turned Wallace into the outside wall, bringing out the caution.  Stage two ended shortly after that, with Bowman missing out on stage points again.

Yet just when it looked like the No. 88 team was coming unraveled, Bowman went to work and fought his way through the field.  By the closing laps of the race, Bowman had reached the top five, but he still did not have enough points to move above the cut line.  It took a combination of Bowman climbing all the way up to second place and Ryan Newman blowing the backstretch chicane with three laps to go to give the No. 88 just enough points to advance to the round of 12.

I gave it my all to advance and we did it. I’m so proud of my team. I’m going to be recovering the rest of tonight but want all of you to know I appreciate your support. pic.twitter.com/pwmve7ud2Y

Bowman made it to the second round of the playoffs for the second straight year.  However, just like 2018, this round dashed his championship hopes.  After another top five at Dover International Speedway, disaster struck at Talladega.  While trying to hold the lead on lap 107, Bowman threw a late block on Joey Logano.  The No. 22 tagged the No. 88 in the back bumper, sending Bowman spinning in front of the field and causing a huge pileup.  Bowman shouldered the blame for the incident, which relegated him to 37th place and 18 points below the cut line.  An 11th-place finish in the return trip to Kansas was not enough to keep Bowman in title contention.  He finished out the year with two more top 10s and two finishes outside the top 20.

For the most part, Bowman’s 2019 campaign was an improvement over 2018.  The victory at Chicagoland proved that he could win at NASCAR’s highest level.  He also demonstrated good resiliency and better overall speed.  However, the No. 88 was not consistently fast over the course of the whole season.  At his best, Bowman could run in the top five with ease.  At his worst, it was a struggle just to finish in the top 15.  You never really knew which version of the No. 88 team was going to show up week to week.

To make more progress in 2020, Bowman and his Hendrick team need to find that consistent speed.  If they do, Bowman could become a regular race winner and a more serious title contender.