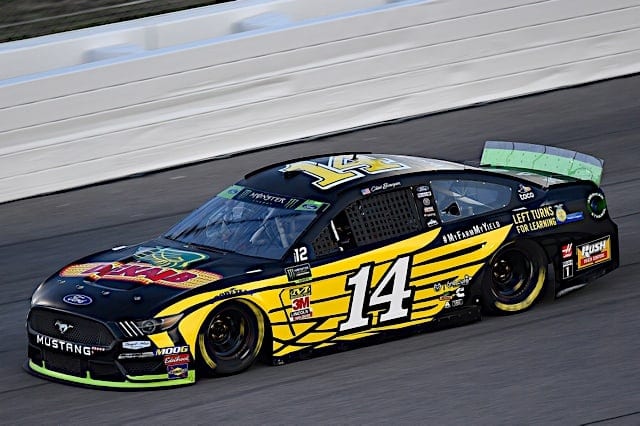 Clint Bowyer’s 2019 NASCAR Cup Series season can be summed up in two words:

Wait, you may be thinking. How can that be? He made the second round of the playoffs.

Yeah, and it was amazing he was even able to do that.

He kicked off his 2019 campaign with a late-race crash in the Daytona 500. Coming upon the closing laps, Bowyer knew he would have to make the right move to win. Unfortunately, he made the wrong move. Instead of trying to push fellow Ford driver Michael McDowell, he decided to go below and slide up. He wasn’t clear, however, and wrecked out of the race.

After placing fifth at Atlanta Motor Speedway, Bowyer then had three consecutive finishes outside the top 10. One of those was at Auto Club Speedway; he qualified ninth but started having mechanical issues in the first stage. His crew replaced a spark plug and wire but then diagnosed it as an engine issue. The team then had to repair some damage during the stage two break after a tire cut down. Bowyer tried to continue for the remainder of the race until smoke came out on lap 130. He retired from the race and was scored in last place.

Bowyer’s spring results was refreshing and perhaps key to entering the playoffs. From the March Martinsville Speedway race to June’s Pocono Raceway event, Bowyer earned four top fives and seven top 10s. This includes a season-best second at Texas Motor Speedway. In that race, he led his first laps of the year early on, but had a battery issue in stage two. Once he switched to the backup battery, he regained speed and positions on the track. In the closing laps he and Denny Hamlin made fuel-only pit stops, but Hamlin drove away from Bowyer. Still, it was his best result thus far and remained as such the rest of the year.

Then came that dreadful summer, the one the Stewart-Haas Racing driver would rather forget. In 11 races Bowyer had eight finishes outside the top 10, including six 20th or below. Four of those were in the 30s.

One of those came in the FireKeepers Casino 400 at Michigan International Speedway. Bowyer’s crew had fixed the handling issues on the car and put him in the top 10 in the final stage. But on lap 129, he was battling for positions with several others when he and Erik Jones touched, and he hit the outside wall. He sustained too much damage and ended the race 35th.

On second thought, Michigan wasn’t kind to him this year in general, as he also crashed out of the second trip to the track. Chicagoland Speedway in June and Daytona International Speedway the next week were his other two DNFs in that span.

His troubles at Chicagoland started in the first stage, shortly after he made a fuel-only pit stop. A tire went down and he spun around on the track before bringing it back down for repairs. The flat tire had torn off part of the quarter panel, and the extra trips down pit road put him a couple laps down. Later in the second stage he had another flat tire. Rubber built up in the wheel well, which caught fire on lap 159. The team tried to make all the repairs it could, but ultimately on lap 189 he retired to the garage.

After the second Michigan event Bowyer rebounded to three straight top 10s, including a fifth at Indianapolis Motor Speedway. Though his SHR teammate Kevin Harvick dominated the race, the organization as a whole was strong. Daniel Suarez finished 11th but was running in the top 10 for much of the race.

That streak was short-lived, however, as Bowyer’s day at Las Vegas resulted in a 25th place. Although SHR swept the first two rows in qualifying, only Harvick secured a top five finish. Bowyer was on the pole, but his car developed major handling problems throughout the race. His pit crew worked on it each time he came down pit road; it didn’t. By the end of the second stage he had lost a lap; however, he reported that the last adjustments were better. Unfortunately, contact between him and another car caused a tire rub that needed repairs. He dropped to 30th, but went back up to 25th by the end of the race.

Even after all of his problems throughout the year, nothing could prepare him for what happened at Talladega Superspeedway.

Though he earned his first stage win in over a year, his race wouldn’t end ideally. With about 45 laps to go, he hit the wall slightly which caused a tire rub. He couldn’t make it down to pit road and spun out.

I mean, it’s really something I’d never seen before.

Bowyer was a couple of laps down by the time he was able to return to the track, but he gained 10 spots by avoiding more crashes.

He would then just have one more undesirable result in the final five races of the season. At Martinsville, he had an unfortunate incident with a lapped car that caused a tire to go down. After the crew fixed it up, he was a couple of laps down and couldn’t make them up. Then with about 50 laps left, a track bar broke, and he was sent to the garage.

After this wild year, I’m sure he was amazed at what he and his team accomplished. He probably is already looking forward to next year.

Bowyer signed a contract extension with SHR in October for the 2020 season, but he knows he’ll need better results if he wants to continue. Perhaps in the future he’ll become a broadcaster or reporter.

.@ClintBowyer clearly has a future in @NASCAR broadcasting!

Speaking of reporting, his son Cash doesn’t seem to shy away from the camera either.

There's no kiddin' around when Cash Bowyer's in the house… well, maybe just a little! ? How cute was this #NASCARonFOX feature with Cash and his best friend, Owen? ?#2019FinalLaps | #KidsDriveNASCAR pic.twitter.com/f1v1iS5ies

Bowyer does have a fun personality, but he’s a racer at heart. He desires to win, and with the offseason changes at SHR, he might do just that. He’ll have to go through Joe Gibbs Racing, though, which swept the podium of the bookend races. But if Harvick can pull through and win, so can Bowyer.

Bowyer’s two wins in 2018 were his only wins in the last 7 years, so why assume this year sucked. Good thing Tony likes Clint to drink beer with, because Daniel had the sponsors Clint lacks. I really doubt Clint adds to his 10 total career cup wins before he retires.

I will sum it up in one word: karma.