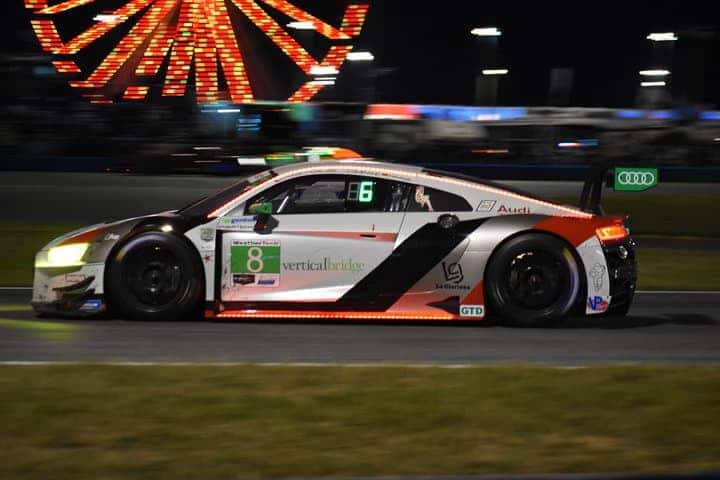 Starworks Motorsport announced Monday (Dec. 9) that they will move away from the GT Daytona class (seen above) and return to the prototype ranks in 2020.  The team has acquired an ORECA 07-Gibson and will race it in at minimum the four Michelin Endurance Cup races in 2020.  The team hopes to add the three sprint races as well, but that is currently unconfirmed.

Ryan Dalziel will return to the team for his second straight year, but he will have a new teammate.  Dalziel will be joined by John Farano, the 2012 Continental Tire SportsCar Challenge Grand Sport championship (along with David Empringham).  Farano brings sponsorship to the team from Tower Events, resulting in a rebranding of the team.  They will now be known as Tower Motorsport by Starworks.

“I can’t thank John Farano enough for the call,” team owner Peter Baron said in a press release.  “His call came the day after IMSA released the 2020 rules requiring a Bronze rated driver as part of a line-up.  John shared my vision of no excuses and doing whatever it takes to win, and after a few more follow-up calls and emails, we had a program.  Starting off the project with a new ORECA 07 was an easy decision.  We’ve put together an amazing group of Starworks alumni who are excited to return back to prototype racing.  This should be one of our best seasons in motorsport and I believe we are a very strong contender to win the Rolex watches at Daytona in two months.”

Farano, 60, has one career IMSA WeatherTech SportsCar Championship start.  That came in the 2014 Rolex 24 at Daytona in a GT Daytona-class Ferrari 458 GT3 for Scuderia Corsa, where he finished 14th in class.  Prior to that, Farano made six starts in Grand-Am’s Rolex Sports Car Series in GT equipment.

More recently, Farano has been racing in the European Le Mans Series.  This past season, Farano raced full-time for RLR MSport in a similar ORECA 07-Gibson alongside Arjun Maini and Bruno Senna.  However, the team struggled for much of the season with a best finish of eighth at Paul Ricard.  In 2018, Farano won the LMP3 class championship alongside Job van Uitert and Rob Garofall in a Ligier JS P3-Nissan.

If the team ends up running all seven LMP2 races in 2020, then Dalziel and Farano will be the full-season driver lineup.  For the four Michelin Endurance Cup races, computer programmer/sports car racer David Heinemeier Hansson will join the team as their third driver.  Veteran racer Nicolas Lapierre will complete the team’s lineup for Daytona only.

More recently, the team competed in the former Prototype Challenge class with a couple of ORECA FLM09-Chevrolets.  From 2014-2016, the team earned nine class victories, including an overall victory in the PC/GT Daytona race at then-Mazda Raceway Laguna Seca in 2014.

Tower Motorsport by Starworks’ addition brings the LMP2 class up to six full-time entries for 2020.  In addition to returning entries from PR1 Mathiasen Motorsports and Performance Tech Motorsports, DragonSpeed will run a full-time entry and provide support for Era Motorsports.  Finally, Rick Ware Racing will compete with a Riley Mk. 30-Gibson.