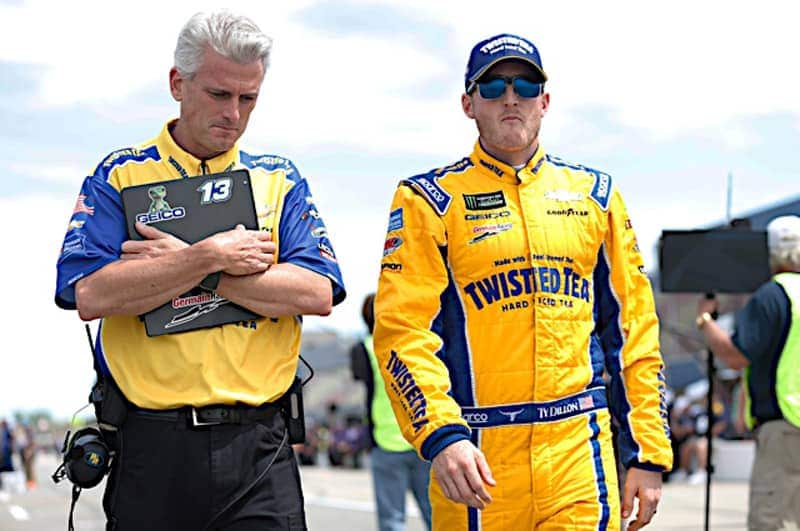 You know it was a lackluster year when the highlights of your season included the indefinite suspension of your crew chief in August, rumors of your impending retirement at the end of 2020 and the paint scheme you ran at Talladega Superspeedway in October.

Such was the way the 2019 NASCAR Cup Series unspooled for Ty Dillon, driver of the No. 13 GEICO Chevrolet Camaro for Germain Racing.

While older brother Austin Dillon was publicly accused by Alex Bowman of driving with a silver spoon firmly entrenched in his anatomy, Ty Dillon lurked around the top 20 for the majority of the season. Despite getting 2019 underway with a sixth-place finish in the Daytona 500, the 27-year-old from Lewisville, N.C., found himself struggling the remainder of the spring, scoring four top-20 runs in the nine events following the Great American Race. From the Gander RV 400 at Dover International Speedway in May until the Toyota/Save Mart 350 at Sonoma Raceway in June, Dillon could not escape finishes in the 20s.

The next two weeks reflected the lows and highs for Dillon and the No. 13 Chevrolet, as he scored his worst finish for 2019 in the Camping World 400 at Chicagoland Speedway in June (a 35th) and his best (fourth) in the Coke Zero Sugar 400 at Daytona in July. For the year, Dillon achieved an average finish of fifth at the World Center of Racing.

Most of Dillon’s 2019 was spent addressing events that affected his Cup season. In August, his veteran crew chief, Matt Borland, received an indefinite suspension from NASCAR after he was found to be in violation of the sanctioning body’s substance abuse policy. Borland was accused of misusing a known dietary supplement and energy booster called methylhexanamine (a chemical compound also known by its street name DMAA). The substance, which Borland admitted to consuming in what he referred to as “diet coffee,” prompted NASCAR to suspend him beginning with the Bass Pro Shops/NRA Night Race at Bristol Motor Speedway. Borland was replaced as Dillon’s crew chief at Germain by Justin Alexander, who served as crew chief for Austin Dillon’s Daytona 500 victory in 2018. An appeal to NASCAR enabled Borland to return atop the No. 13 pit box at Charlotte Motor Speedway in September for the Bank of America ROVAL 400 after being suspended for five races.

In September, rumors circulated insinuating that Dillon was going to retire from racing at the end of the 2020 Cup season; his contract with Germain was slated to end at that point. But Dillon publicly declared he had no plans to retire once his contract was up for renewal.

When October rolled around, Dillon made news with the announcement that he would drive a throwback paint scheme in honor of his grandfather – NASCAR Hall of Famer Richard Childress – at the 1000bulbs.com 500 at Talladega. The No. 13 sported similar colors, fonts and graphics to the 1968 Camaro driven to a 23rd-place finish by Childress in the inaugural Talladega race in September 1969. That event, famous for the boycott by members of the Professional Drivers’ Association that allowed teams in NASCAR’s Grand American division to compete, marked Childress’ Cup debut. In the 50th anniversary of the Talladega race, Dillon scored a 10th-place finish, one of his three top-10 runs for the 2019 season.

Dillon’s 10th-place finish at Talladega in September was the high point of races heading into the postseason. He missed making the playoffs and continued to struggle throughout the remainder of the Cup schedule. By the time the checkered flag flew over Homestead-Miami Speedway in November, Dillon was 24th in the championship standings. While his season was nothing stellar, it did end with him completing 99.2% of the possible laps to run and zero DNFs to his credit. This was a testament not only to Dillon’s relatively strong skills as a driver, but also to the efforts of crew chiefs Borland and Alexander and to the Germain organization. One can only hope the No. 13 team will find more stable footing with introduction of the Gen-7 configuration in 2020.