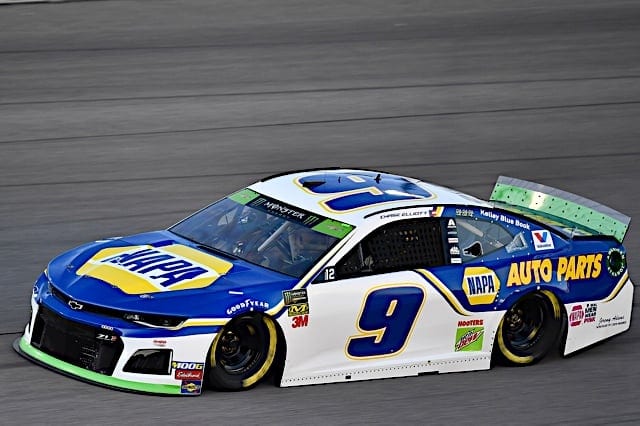 Fresh off the best season of his career Chase Elliott was poised and ready to go for the 2019 season. Elliott’s 2018 season saw him visit victory lane three times, including two in the playoffs. This year Elliott and his Alan Gustafson led team were ready to take the next step in becoming NASCAR champions.

Before his season got underway at the Daytona 500 in February, Elliott made an appearance with Barstool Sports Founder Dave Portnoy doing the popular One Bite pizza reviews. Elliott and Portnoy rated pizza from Napoli Pizza in Daytona Beach, Florida. Portnoy goes around the country and grades various pizza places on their pizza with 1 to 10 scale and occasionally brings on celebrity guests. This time Elliott was a guest and graded his slice a 4.8 with Portnoy grading his a 6.6.

After the review it was time for the real business at hand. Elliott and his team looked to get out of the gate strong and win the Daytona 500. One of the many things you have to do to win the Daytona 500 is to survive and the No. 9 team was doing just that in the closing stages. With ten laps to go he was in the middle of the pack but charging up fast. Then, Paul Menard and Matt DiBenedetto got together causing DiBenedetto’s No. 95 car to spin and hit the outside wall. The accident took out about 20 other cars in the process. Elliott escaped with minor damage, but two more accidents late in the event cost him a chance at victory. He ended up finishing 17th.

From there the No. 9 team stumbled out of the gate, finishing in the top 10 just once in the first five races of the season. He’d only add one more top ten t in the next four stops on the schedule, but it was his best run of the early season, a second at Martinsville in April. As the Cup Series entered the tenth race of the season at Talladega, Elliott was in desperate need of a good finish.

He had the dominant car of the day at Talladega and was able to survive the wrecks and fight his way to the front late in the going. On a restart with five laps to go Elliott was in the second spot alongside defending series champion Joey Logano. With an assist from teammate Alex Bowman, Elliott went to the lead. He held the lead until the white flag lap when an accident on the backstretch ended the race, giving Elliott his first win of the season. The Dawsonville, Georgia native was excited, and it seemed to kick his season into gear.

This one ranks up near the top. What a day! ? pic.twitter.com/ipx0RqbRjL

After the Talladega win, he rattled off four consecutive top-five finishes and found himself third in the standings by the start of the summer. The streak would end with a 20th place finish at Michigan. From that point forward, we never saw the consistency out of the No. 9 team that was needed to compete for a championship. He would win again at Watkins Glen in August and was hoping to build on that win for the rest of the season.

However, that did not happen. By the time the playoffs came around many were questioning the speed of the Hendrick Motorsports Chevrolets and with that came the wonders about Elliott’s shot at the championship. A solid fourth place run at Las Vegas and a 13th place finish at Richmond put the team in a decent spot as the playoffs entered the third and final race of round one, the Roval at Charlotte Motor Speedway.

Not known as your prototypical ‘road course racer’ Chase Elliott has proven so far in his young career that he can get it done on road course type facilities and in the Bank of America Roval 400, Elliott again proved his road course prowess.

But that wouldn’t come without some fireworks. He would win stage two but on the following restart the No. 9 Chevrolet led the field into turn one, but the car did not turn. He would lock the brakes up and crash into the tire barriers. For all intents and purposes, it looked like Elliott’s day was done.

The team came roaring back. Elliott steadily worked his way through the field and with just six laps to go, passed Kevin Harvick to take the lead. From there, he didn’t look back. He would pull away to victory and did a burnout right into the tire barriers. It was an impressive win and one that would advance him into the round of 12. The close call got the attention of racing legend Mario Andretti who proceeded to tease Elliott about the incident on Twitter but also congratulate him at the same time.

Hey @chaseelliott you had them covered so bad that I think you stuffed it on that restart on purpose so you could show them you could come back from last and still win it. Huge, huge congrats to you and team. @CLTMotorSpdwy #NASCARonNBC

I wish I could say that, thanks legend.

That win put Elliott and his team back in the championship conversation. But it wouldn’t last. NASCAR is a very humbling sport and the following week at Dover, Chase Elliott was reminded of that. He finished in the 38th position after a blown motor on lap eight. The finish put the team in a deep hole but after an eighth place run at Talladega, Elliott was four points off the cutoff entering Kansas. The team needed a solid day to advance to the round of eight and they’d accomplish just that finishing runner-up to Denny Hamlin to advance. It was a close call, but Elliott still found some humor on his Twitter page.

The 9 team lives to fight another day. #di9 pic.twitter.com/IKgLTenVef

The good feeling was to be short lived as the series entered the first race of the round of eight at Martinsville Speedway. The weekend got off to a horrendous start as just a few minutes into the first practice session Elliott brought the session to a halt with a blown motor. The team lost valuable time on the racetrack and had to start at the rear of the field for changing an engine.

Still, the No. 9 car had speed, and few expected him to be in the back for long. During the second stage, however, a broken axle would occur on a pit-stop and the team would lose several laps trying to repair the broken part. They eventually made the fix, but the damage was done, and Elliott finished a disappointing 36th. It was a sign of things to come.

The following weekend’s race was at Texas Motor Speedway and Elliott was looking to rebound but just nine laps into the event, the No. 9 Chevrolet spun and backed his car into the outside wall. The damage wasn’t terminal, but it was enough to relegate the No. 9 team to a 32nd place finish and put him in a must win situation headed to ISM Raceway in Phoenix, Arizona.

At ISM Raceway, Elliott was running in the middle of the field when on lap 165 a tire let go and sent him hard into the outside wall, causing major damage. This time, it was terminal. Elliott and company finished in the 39th position ending the round of eight with finishes of 36th, 32nd and 39th putting an end to his championship hopes. The team would finish the season finale at Homestead in the 15th position and Elliott would wind up 10th in the series point standings.

All things considered it was a bit of a disappointing season for the No. 9 Hendrick Motorsports team. The lack of consistency really hampered the middle part of the year and their championship run at the end of the season. But there were some bright spots. The team won three more races to bring Elliott’s career total to six and at the NASCAR Awards banquet in Nashville, Tennessee it was announced that Chase Elliott would win the sport’s Most Popular Driver Award for the second consecutive season. Elliott said he was honored to receive the award and spoke about how the fans who come out and support him are the ones that drive him to success.

The Most Popular Driver Award is a family affair in the Elliott household.

RETWEET to congratulate @ChaseElliott on his second! pic.twitter.com/Dh1CAvokeH

The 2020 season will be Chase Elliott’s fifth full-time season. The Chevrolet Camaro will receive a facelift in the offseason and everyone in the Chevrolet camp believes it will be a step in the right direction for the manufacturer. There’s no doubt though that if Chevrolet finds speed again in 2020, Chase Elliott will be a championship contender.

How do you rate a B- for crashing your way out of the playoffs two straight years?

Guess you didn’t read the Austin Dillon review. He got a “C-” without winning a race or making the chase. I think by comparison Mr Popular should get at least a “B” if Dillon gets a “C-“. I guess they grade on a heavy curve.