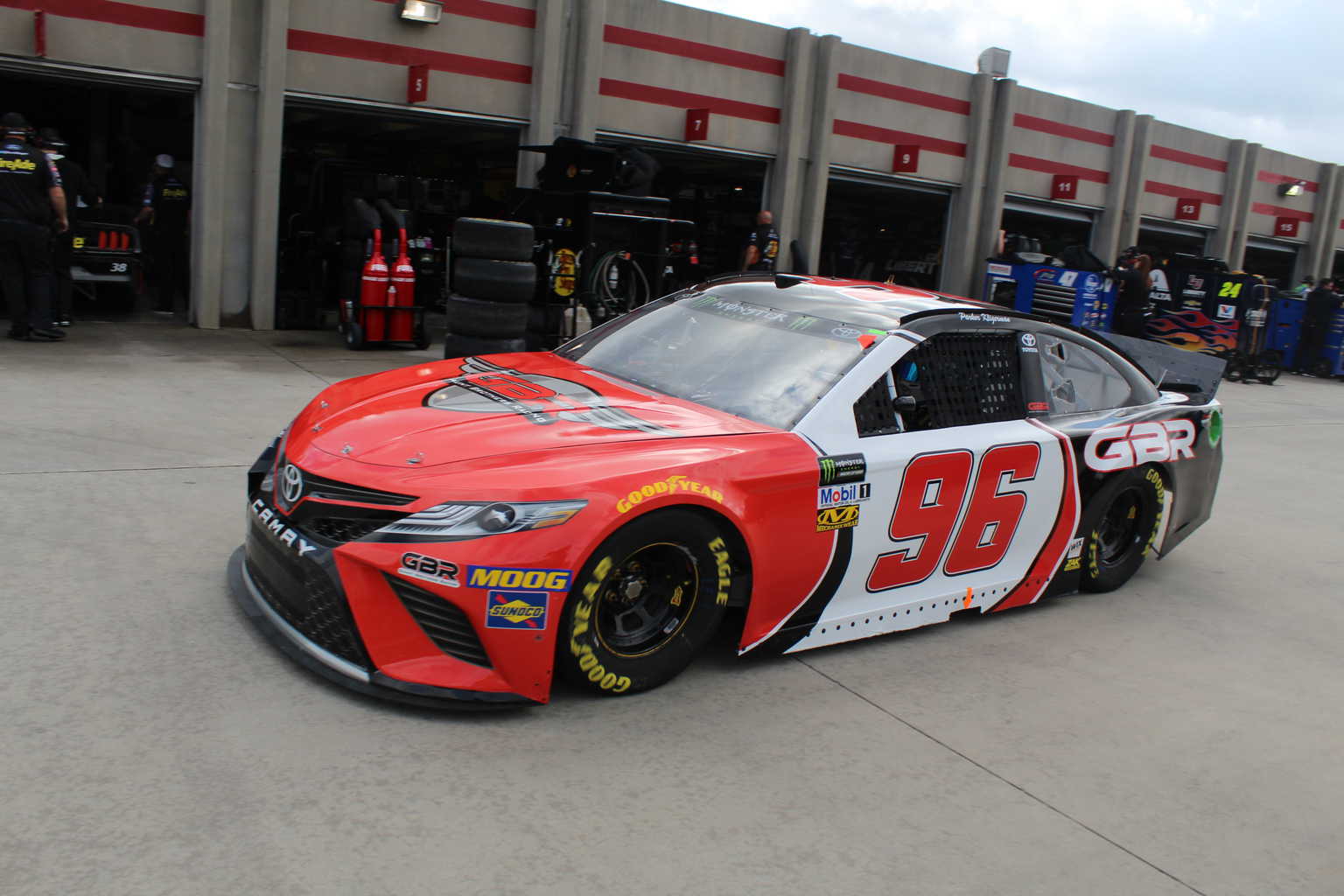 Gaunt Brothers Racing reduced the number of races they ran in 2019 in the NASCAR Cup Series, as well as the number of drivers. In return, Parker Kligerman and Drew Herring helped bring more consistent results and improved performance to the No. 96 Toyota Camry.

The 2019 campaign started with jubilation and record finishes for both Kligerman and GBR in both the Gander RV Duel and the Daytona 500.

With assistance from fellow Toyota driver Kyle Busch, Kligerman raced his way into the Daytona 500 with a 12th-place finish in the first Gander RV Duel. Busch had been involved in a spin earlier and had fallen a lap down. Kligerman had to finish ahead of both Ryan Truex and Tyler Reddick to be in the Daytona 500. Klingerman, along with Busch, Truex and Reddick, had lost the lead draft and were all alone. Busch had caught his way up to Kligerman after passing Truex and pushed Kligerman ahead of Reddick. He had to hold off the Reddick and Truex pairing and defend 12th for three laps.

In the Daytona 500, Kligerman and Casey Mears tangled on lap 107 entering turn 1 as the leaders were bearing down on them.

Mears hit the left rear of Kligerman’s Toyota and sent him spinning. Both continued, and on the backstretch on the way to pit road, Kligerman waved his hand at Mears, showing his displeasure for the incident. Mears did not continue in the race, but Kligerman marched on. He benefited from multiple late wrecks to finish a career-high 15th. It was GBR’s best effort in the Great American Race, too, as it improved upon the team’s 2018 effort with Kennington, who finished 24th.

Daytona wasn’t the only top-20 finish for GBR and Kligerman in 2019. Kligerman once again showcased his superspeedway talent in October at Talladega Superspeedway. Kligerman ran a clean race, ran as high as fifth and avoided the crashes that occurred throughout the race.

On the final restart on lap 187, he restarted 12th but wasn’t able to do much with it. He hovered around that mark through the final two laps before crashing hard in the trioval. Kligerman got into the rear of and turned Chris Buescher into the wall. Kligerman then hit the side of Daniel Hemric and was turned head on into the wall. His car got pointed back in the right direction, and momentum carried his car across the start/finish line to complete the last lap officially but finished in 15th.

Up until that point, the day had gone well for GBR and Kligerman. A push from the draft here or there and Kligerman may have earned himself and GBR their first-career top-10 finishes. Despite the finish, Kligerman and GBR got to walk away from Talladega with bragging rights. Kligerman clocked a lap at 205.803 mph, which was the fastest lap of the race and the 2019 season.

Well, I won’t lie. For a bit I thought we might get the big W today. Maybe a bit optimistic but we had done everything we could to give ourselves the chance and that’s all you can ask for in this game. #TRD40 https://t.co/6iNGxpLziC

Kligerman and GBR attempted and started 14 races together in 2019. At the Daytona 500, the team had backing from Toyota, highlighting Toyota’s partnerships with Team USA. The following three starts at Atlanta Motor Speedway, Las Vegas Motor Speedway and Texas Motor Speedway were without major sponsorship.

But beginning at the April Talladega race, the No. 96 Toyota honored TRD’s 40th anniversary in its first of nine appearances in the team’s remaining 11 races. In the other two races, GBR ran without major sponsorship.

Kligerman’s start and finish averages in his 14 starts in 2019 mirrored the four starts he made for GBR in 2018. He averaged a starting position of 32nd and on average finished at a 26.5. The overall performance of the car improved, with Kligerman being the sole driver for much of the season. He improved the starting position average by 1.4 positions and improved the overall average finish by 2.5 positions.

Improved consistency led to more finishes inside the top 30 for GBR in 2019. In 11 of his 14 starts, Kligerman brought the GBR Toyota Camry to a top-30 finish. In two of the three races he didn’t, he was involved in a crash. One at Daytona in July where he was involved the lap 120 Big One. The second was at Indianapolis Motor Speedway when he was caught up in the wreck that ended Jimmie Johnson’s playoff hopes.

One could say that GBR ended the season just as it began it: on a high note.

Herring, Toyota and TRD test driver, made his Cup debut at Homestead-Miami Speedway for the team. Herring usually spends most of his time behind the wheel to fine-tune cars and setups for TRD and affiliated teams. But in the season finale, he got to race for real. He had previously started in 22 Xfinity Series races, 12 of them with Joe Gibbs Racing. He also started in one NASCAR Gander RV & Outdoors Truck Series and three ARCA Menards Series races. His last stock car start had been the ARCA season finale at Kansas in 2018.

Those who knew and understood his weekly contributions to TRD were well aware that he was more than prepared, including Kligerman.

Super excited for my buddy @Drew_Herring . He’s a wheelman who deserves the opportunity. NBC is incredibly gracious with letting me race as much as I do, but I’ve always committed I wouldn’t do this race.

Herring qualified 37th in his TRD 40th Anniversary-sponsored Toyota, but like Kligerman in nearly every race before him, he finished better than he qualified. He ran as high as 12th and averaged 32nd in the running order. Herring finished his Cup debut in 29th, adding another top 30 to GBR’s 2019 totals.

While GBR competed in seven fewer races in 2019 compared to 2018, the team’s consistency improved greatly. GBR chose to stick with a single driver essentially all year long. Kligerman was a great choice, especially at superspeedways, where he has two victories in the Truck Series. He and Herring were able to improve upon the average starting and finishing positions for the No. 96. In addition, 12 of GBR’s 15 starts resulted in a top-30 finish. In 22 total starts in 2018, it was only able to earn 12 top 30s.

Simply put, it made more with less this season, and the records show that.

GBR was never a major threat to win a race, but Kligerman gave it the opportunity to at Daytona and Talladega by starting. If the cards fell its way, the team may have found itself in victory. After two years of part-time racing, it has assembled 38 starts since the 2017 Daytona 500, 37 of those since 2018.

Is it time for GBR to go full-time Cup racing? Possibly. The right driver can make all the difference. Its performance with Kligerman overall has shown great strides. With Daniel Suarez still on the hunt for a 2020 ride, GBR may be one of the few options left should Suarez want to remain in the Cup Series.

If not and GBR decides to stick it out another year in the part-time ranks, I see no problem with that. I can’t see a reason why Kligerman wouldn’t want to make the occasional start, especially on the superspeedways. Maybe there will be more opportunities for Herring or an up-and-coming Toyota driver to get their first starts in the Cup Series.

At any rate, GBR has made great strides with its program in 2019. Sticking primarily with Kligerman as its driver greatly helped move the team in the right direction. If the team continues to improve and should the desire exist, it will only be a matter of time before the No. 96 GBR Toyota is running the full 36-race Cup schedule.