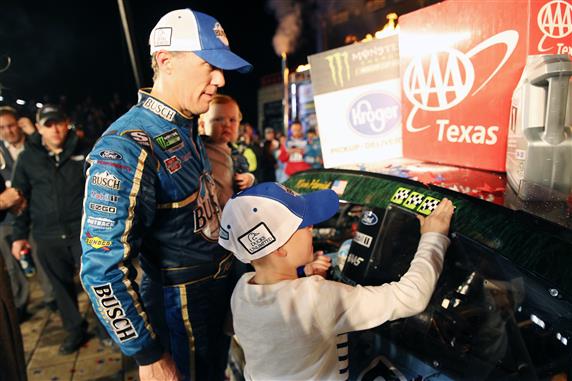 Ho-hum, just another NASCAR Cup Series race at Homestead-Miami Speedway in which Kevin Harvick was in the final four.

While that is true, he didn’t exactly start out the 2019 season the same way as his 2018 campaign.

As you may recall, Harvick began that incredible year with a three-race win streak after the Daytona 500. He went on to capture five more trophies and ended the season with 23 top fives, 29 top 10s and four poles. He also finished on average around ninth and ended up third in the standings.

Now compare that to this past season. One notable feature was that he won half as many events as he did in 2018. Even more surprising was that he didn’t capture his first victory until midsummer.

Of course, one could argue it would be difficult to match or surpass that historical season, even for a driver of his caliber. After all, the package rules were different this year (though that didn’t stop Joe Gibbs Racing from winning 19 races). Also, dare we not forget the qualifying debacles in the beginning of the year, especially in March at Auto Club Speedway.

Yet it appeared that Harvick and his Stewart-Haas Racing team adjusted well and found speed. In the first 13 races Harvick earned nine  top 10s, including five fourth-place finishes. He also nabbed three poles in that span.

So why did it take him so long to break out a win? Well, pit road penalties and an ill-handling racecar set him back in much of the first half of the season. For example, at the spring Texas Motor Speedway event, Harvick’s pit crew had an uncontrolled tire at about the halfway point. As a result, he had to restart at the tail end of the longest line. He also suffered handling issues throughout the race but was able to rally up to eighth place.

Later on at Talladega Superspeedway, Harvick was caught up in an early multi-car wreck and retired 38th. Unfortunately, those incidents are far more common at superspeedways and hard to avoid.

Then, just a few races later at Kansas Speedway, Harvick led early and often; he looked to be the one to beat. Alas, he made an early pit stop on lap 178, thinking he had a flat. Instead there was debris on the grill, which his crew cleaned off, but he was never able to surge back to the front of the field.

Even in the All-Star Race he had a shot to win, but slow pit stops allowed Kyle Larson to take control of the final restart. Though Harvick dominated the second stage and led 33 laps, he had to settle for a runner-up finish.

In the Pocono 400 Harvick looked to be the lone car able to overtake Kyle Busch for the lead, but his day ended poorly. Not only did he have to complete a pass-through around lap 124, he also had a broken power steering box.

After that 22nd-place finish, he rebounded to a seventh at Michigan International Raceway and sixth at Sonoma Raceway. Unfortunately, he then had three consecutive finishes of 14th or lower. One of these came at Kentucky Speedway, where he encountered similar issues as at Pocono Raceway. All of these struggles and mistakes just made his next race a little bit sweeter.

Not only was that a repeat of last year, but so were two other victories: the Consumers Energy 400 and the AAA Texas 500. He also mimicked his celebration at Michigan — he took his son for a ride.

His other win came at Indianapolis Motor Speedway, the event before the playoffs. Harvick flat-out dominated from start to finish. He led 118 of 160 laps and had a six-second gap over Joey Logano. He also continued his awesome celebrations.

"I thought we weren't supposed to eat off of the ground. Someone please explain." Thank you for the sweetest moment of the day, Piper! ?@KevinHarvick | #Brickyard400 | #4TheCup pic.twitter.com/t7s1QHjRqn

But after obtaining that first victory at New Hampshire, he only had two finishes outside the top 10. These came at Bristol Motor Speedway (38th due to mechanical issues) and at Talladega. Not even pre-qualifying inspection issues at Kansas could keep him from a ninth-place finish. Certainly, the consistency he held throughout the playoffs was key to a Championship 4 berth. Oh, yeah, his win at Texas (in the Busch Beer/Ducks Unlimited car) helped too.

Speaking of paint schemes, Harvick had some fun ones this year:

Turns out we’re not the only ones named “Busch.” So, we’re taking a break from giving those other guys free advertising and giving @KevinHarvick the spotlight. Look for the Harvick car this week at Dover! pic.twitter.com/mrB0uhoVKZ

Based on these and other schemes, it’s easy to see why Busch Beer won the NASCAR marketing achievement award. (On a semi-unrelated note, Harvick took home the Busch pole award. He qualified first six times, the most he’s had since his 2014 championship season.)

Anyway, how did Harvick do in the final race of the season?

In a race to determine it all at Homestead, Harvick appeared to be a contender early on. However, his car encountered handling issues and didn’t have the long-run speed needed to pull ahead. He tried to gamble late in the race by staying out and hoped for a caution, but none came. When all was said and done, Harvick crossed the line in fourth and was third in the standings for the third straight year.

What does this mean for his future? He’s already stated he would be racing for at least a couple more years, but beyond that? Who knows. Unlike his competitor Jimmie Johnson, Harvick is still winning races. Though it took him until July to achieve the first victory, he proved in later races he still had speed and consistency. Also, his crew chief Rodney Childers is signed on a multi-year contract. I’m sure he wants to help Harvick win a second championship.

As far as next season goes, Harvick and the No. 4 team will continue to contend and earn victories. Also, SHR as a whole will look to improve upon its down year. Even though three of the four drivers made the playoffs, only Harvick could make it to the final four. It’s no doubt it’ll have to go through JGR after its monster year. Can SHR do it? Only time will tell.

Even though Harvick didn’t win the 2019 championship, at the end of the day he knew what life was all about.

Wasn’t 2018 the year Harvick ran a completely illegal spoiler in all those wins. Finally one intelligent inspector noticed what all the other incompetent inspector’s missed completely. Kyle smoked Harvick.

I dunno, was this review of his season or a photo shoot? Lots of Kevin with his carrot top kids and praise Why? Isn’t this about KEVIN and his JOB? Not Delana, and the off spring?

After 2018(?) with the cheating that went on for so many races (according to info, if memory serves) until one man at the inspection process noticed something was not right. We wondered why he was flying and he won all those races and would have won more before the Superman of Inspection noticed. Why did it take so many races, so many races he won for someone to notice? Come on…. It makes you sick in the spirit of fair play nothing of HUGE consequence came of that team. Of course the DEGA bullshit still pisses me off and he doesn’t think or NASCAR thinks a damn thing was wrong! Come on….

In my opinion of course.