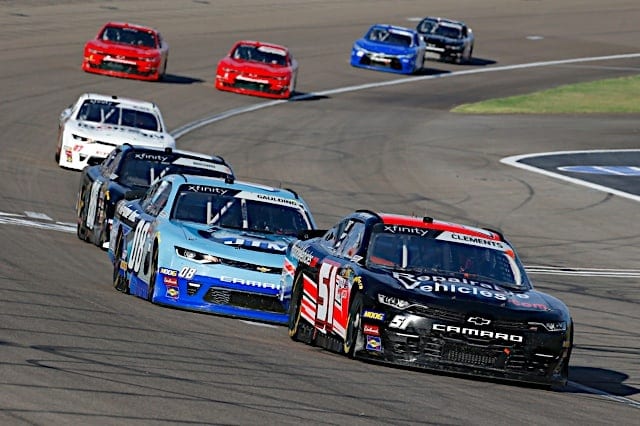 While the NASCAR Xfinity Series playoff drivers were the center of attention for most of the season (the same 12 drivers were top 12 in points from the third race on), some of the best racing came in the middle of the pack.

And quite honestly, a lot of the midpack drivers had solid years, much improved from previous seasons.

Compared to 2018, there were three big-time teams and two organizations that shut their Xfinity operations down completely prior to Daytona International Speedway. Roush Fenway Racing elected to focus solely on its NASCAR Cup Series efforts, getting rid of the Nos. 16 and 60 teams. After announcing Ross Chastain was to run full time in the No. 42 Chevrolet, Chip Ganassi Racing had to shut its Xfinity team down after DC Solar was raided by the FBI last December.

With those three teams shutting down — specifically the Nos. 16 and 42 — it left an opportunity to be desired for smaller teams because that’s at least a two-spot increase should a given team keep on pace from its 2018 statistics, something a few organizations took advantage of.

No, none of the mid-pack teams got to victory lane, though a few came awfully close on a few occasions. Gray Gaulding finished runner-up at Talladega Superspeedway to Tyler Reddick, giving SS-Green Light Racing its best-ever finish. Jeremy Clements had a summer stretch of six consecutive top-12 finishes, including back-to-back top 10s for the first time in his career.

Of drivers running the entire schedule that failed to make the playoffs, both Gaulding and Clements had the most top-10 finishes with four. For Gaulding, just running a full season in NASCAR and getting experience was a success, while Clements posted a career-best average finish of 16, exactly two positions better from 2019.

Dang what a great day @BMSupdates yesterday at my fav short track! Qualified 5th and came home P4 in the @Repairable1 @TeamChevy. I’m super proud of our small team. It means a lot to run that good against the big teams. Now let’s go get that ? next week at @roadamerica! I’m rdy! pic.twitter.com/GyOPrqlhdR

Brandon Brown, running his first full-time season for Brandonbilt Motorsports, finished 15th in points, claiming a best finish of sixth at Daytona in July. His No. 86 team impressed throughout much of the season, recording 22 top-20 finishes.

Meanwhile, Ray Black Jr. had his best season to date in NASCAR, finishing 16th in points. His 20.5 average finish was five positions better than his only other full-time season (2016, 25.5). He will be returning to SS-Green Light in 2020.

Josh Williams competed in 32 of 33 races, only missing the spring event at Richmond Raceway. He was scheduled to run a third DGM Racing Chevrolet, but rain halted qualifying, and with no owner points, the No. 92 was sent home. However, Williams impressed and got better as the season went on, placing a season-best eighth at Talladega in April. His five laps led were the most of non-playoff drivers that ran the full schedule.

Solid day yesterday for @dgm_racing_ top 15 all day long, got some stage points and accomplished our goals. P17 In drivers points p20 in owner points. Very thankful for @MarioGosselin @MGosselin12 for putting me behind the wheel all year long looking forward to the future #2020 pic.twitter.com/UsciKJbUVn

Compared to 2018, JD Motorsports with Gary Keller was off just a beat in 2019. Placing 18th through 20th in points were Stephen Leicht, Garrett Smithley and BJ McLeod, all running the majority, if not all the races for JDM.

Leicht, 32, competed in his first full season in 12 years. His fifth-place outing in the July Daytona race was JDM lone top-five finish of the season. Smithley, on the other hand, returned for a fourth season in the No. 0 car, finishing 19th in points for the second consecutive season. It was, however, the first time since his rookie season (2016) he failed to score a top 10.

McLeod is in a unique position by running for JDM, racing against his own team (BJ McLeod Motorsports) and oftentimes beating it. 29 of McLeod’s 30 starts were under the JDM banner, only running for his own team at Richmond in April. He ended the season with 11 top-20 finishes, tying his total from his first 95 starts in the series.

Right behind McLeod in points was one of his drivers, Matt Mills, who competed in 29 races, only missing out on the four road course races (Watkins Glen International, Mid-Ohio Sports Car Course, Road America and the Charlotte Motor Speedway ROVAL). His 24.2 average finish was the best for the organization of drivers that ran at least half the races in its four-year history.

Finishing 22nd in points, split between two BMM cars, was David Starr, who competed in his second season for Jimmy Means Racing. The No. 52 Chevrolet had its best year with Starr’s 26th-place average finish. The Texan is scheduled to return to the team in 2020.

To say I’m blessed is an understatement and without those people it wouldn’t be possible.

We have one more race for the season and that’s @HomesteadMiami . It’s a bittersweet feeling for sure! pic.twitter.com/4GM8LGd9eM

Mills’ best friend and teammate Vinnie Miller finished his second season 23rd in points, four positions better than 2018. However, he only had four finishes inside the top 20.

MBM Motorsports had three drivers run in at least 25 races for the team: Joey Gase, Chad Finchum and Timmy Hill. Of those three drivers, Gase finished highest in points at 24th.

But it wasn’t all sunshine and rainbows for Gase, as he admitted in a July interview at Kentucky Speedway with Frontstretch that it had been a disappointing season. His 26.5 average finish was the second best of his full-time career (22.2 in 2018).

Finchum ran in 31 of 33 races, improving on his 2018 average finish by .3 spots. Of the 13 races he was able to run the full distance, Finchum scored eight top-25 efforts.

Meanwhile, Hill was the journeyman of the season, also starting up his own Gander RV & Outdoors Truck Series team. But in Xfinity, Hill shined in an MBM entry at Bristol Motor Speedway in August, finishing a season-best seventh in a collaboration with Hattori Racing Enterprises. That finish was his best result on a non-superspeedway in the series.

Wow what a race!!! Finished 7th with our Toyota Tsusho Supra! Couldn’t have done it without the collaboration of @Hattori_Racing & @MBMMotorsports! They prepared me a really good driving race car! Fun to earn a top ten finish tonight!

Out of the 78 drivers that ran for Xfinity points, there were only four others that ran at least half the season. Out of those four, Tommy Joe Martins finished the best in points at 28th, splitting time between BMM and MBM. In nine starts for McLeod, Martins had a trio of top 20s. In nine starts for MBM, he had two, picking up a 17th-place outing in the penultimate race of the season at ISM Raceway, his best finish since picking up a career-best in 2017 at Iowa Speedway (11th).

In a Periscope video on Sunday, Dec. 8, Martins confirmed he won’t be returning to MBM in 2020, though he’s confident he will be driving something.

Landon Cassill was busy in 2019, running the full Cup schedule and 17 races between JDM and Shepherd Racing Ventures. His talent showed running for Morgan Shepherd, recording the team’s best qualifying effort since 2011 at Las Vegas Motor Speedway (ninth). In the season finale at Homestead-Miami Speedway, the team had enough funding to run the full 300 miles, and the No. 89 Chevrolet started 13th and finished 15th, the team’s best finish since 2009, 238 starts prior.

Both Mike Harmon and Jeff Green competed in at least half the races, finishing 36th and 41st in the driver points, respectively. However, Harmon’s Mike Harmon Racing team had one of its best seasons to date, finishing 34th in owner points. Nicolas Hammann‘s 15th-place finish at Road America was the team’s best career finish. In addition, Harmon, Joe Nemechek, Bayley Currey, Kyle Weatherman and Dan Corcoran all scored top 25s, for a total of seven — a new team best.

Green started the first 17 races of the season with RSS Racing before getting rotator cuff surgery in July. Scoring a pair of seventh-place finishes at Daytona, it was the first time he had multiple top 10s in a single season since 2002.

Combined, these drivers had just three top-five finishes and 17 top 10s, leading just 14 laps, but as a whole, it was a step up for most of these organizations, even if the Xfinity Series seemed extremely top heavy at times. With GMS Racing shutting its doors over the offseason, 2020 might bring another opening for at least one of these teams to make the postseason.