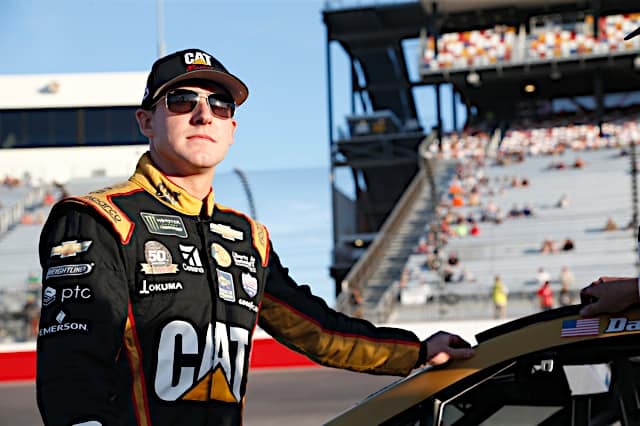 Hemric replaced Ryan Newman as the driver of the No. 8 Richard Childress Racing Chevrolet for the 2019 season. After two consecutive years of making the NASCAR Xfinity Series Championship 4, he earned himself a promotion to the Cup Series. However, his results combined, with the championship-winning performance by Tyler Reddick, cost Hemric a full-time ride in NASCAR in 2020.

From the outset of this season, Hemric struggled. In the first 10 races, he mustered three top-20 finishes, with a career-best finish of fifth place at Talladega Superspeedway in April.

Approximately midway through the season, he showed improvement with five straight top-20 finishes. He then finished seventh at Pocono Raceway in July.

It’s a good day when you get to do these after the race ?….Huge thanks to everyone for the support, I felt like we had a good enough @caterpillarinc Camaro all weekend to get the results like we did today @poconoraceway. Keep chopping wood ? pic.twitter.com/ssz325mDru

Hemric did not end the regular season well, with back-to-back wrecks to close it out.

Meanwhile, in the Xfinity Series, Reddick was one of the Big 3. By the Indianapolis Motor Speedway race weekend, Reddick had won four races and only failed to finish a race twice. Hemric, on the other hand, only finished on the lead lap in six of the 26 races in the regular season.

On track, Hemric closely battled Preece for top rookie honors. By season’s end, Hemric finished as the highest-finishing rookie compared to Preece beating Hemric and Tifft in 14 races. However, Hemric remained unsure where he would race in 2020.

Despite the decision by Richard Childress Racing to release Hemric and replace him with Reddick in 2020, Hemric never gave up on his season.

He snagged his first career Cup Series pole at Kansas Speedway in October. Unfortunately, he finished that race in 31st after a crash ended his race on lap 270 of 277.

Overall, Hemric qualified an average of 18.1, but his finishing average was 22.5. Of his five DNFs, in four of those races the reason listed was a crash. So Hemric was both unable to stay out of trouble and stay on the lead lap. In fact, he only finished on the lead lap in a quarter of the races (nine out of 36).

With his P12 finish tonight, @DanielHemric is officially the 2019 Sunoco Rookie of the Year! ? pic.twitter.com/TZvCorAWNb

RCR appears to have made a wise decision for 2020. Reddick won the Xfinity Series championship, becoming a back-to-back champion. Hemric finished 170 points behind teammate Austin Dillon in the championship standings.

Hemric’s crew chief Luke Lambert was not the one to blame, though. This year was the first time in Lambert’s Cup Series crew chief career his driver finished lower than 20th in the championship standings.

Hemric will look to rehabilitate his career next year driving for JR Motorsports. The 28-year-old will drive the No. 8 Chevrolet in 21 Xfinity Series races.

In 2020, Hemric will become the first reigning Cup Series rookie of the year driver not to compete full-time in a NASCAR series since the beginning of the decade.

His career is now at a crossroads. JRM sent all three of its full-time drivers to the playoffs this year. Hemric will not compete for the championship, so he should have a different goal: regularly contend for wins and win at least one race. He has never won a NASCAR Gander RV & Outdoors Truck Series or Xfinity race.

Still, statistically, Hemric has shown talent. He finished fourth and third in his two Xfinity Series seasons. He has 23 top fives and 39 top 10s in 66 Xfinity races.

Like his Cup statistics this year, Hemric qualifies well, with an average starting spot of eighth. It is his inability to carry that momentum into the race; his average finish is 11.1.

Additionally, he has been unable to stay on the lead lap consistently. In nearly a quarter of his Xfinity races (16 out of 66), Hemric has not finished on the lead lap. He will need to improve upon those statistics if he wants to bounce back next year.

If Hemric contends for wins, and does capture a victory, he may earn another chance to race full time in the Cup Series. His fellow Cup rookie Preece’s success in the Xfinity Series vaulted him into a Cup ride. Hemric can do the same.

However, if Hemric fails to succeed driving for JRM, his career will continue its downward spiral.

Next year will guaranteed bring some newfound joy into Hemric’s life. His wife Kenzie Hemric (nee Ruston) is pregnant, due in May.

Just one more reason to be extra thankful this Thanksgiving! Happy Thanksgiving everyone! pic.twitter.com/OTD5l5jhhr

While winning the Cup rookie of the year was an achievement to be proud of, Hemric failed to meet expectations at RCR. Reddick exceeded expectations for the team in the Xfinity Series. Ultimately, the combination cost Hemric his job.

Best finish: 5th in the GEICO 500 at Talladega Superspeedway