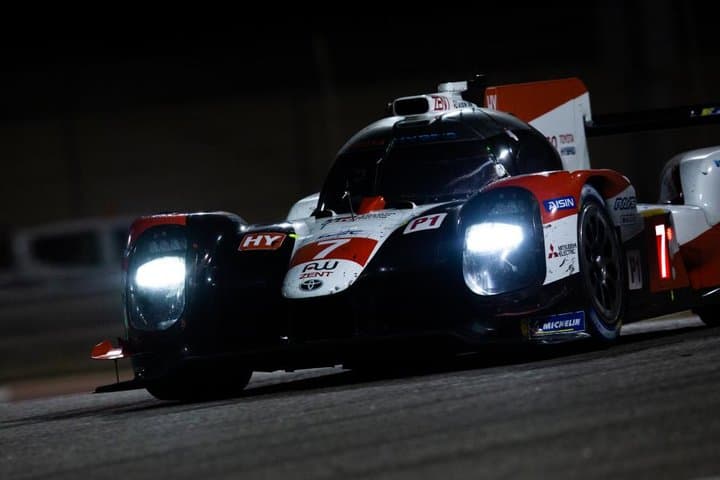 Toyota GAZOO Racing’s Mike Conway, Kamui Kobayashi and Jose Maria Lopez claimed a dominant victory in the Bapco 8 Hours at Bahrain Saturday (Dec. 14), the team’s second win of the 2019-20 season.  It was an unexpectedly dominant race for the No. 7 team, leading all 257 laps.

Conway lined up fourth on the grid behind Rebellion Racing’s Bruno Senna and Team LNT’s Charlie Robertson.  Senna got a good start and charged to turn 1 with Robertson keeping pace.  Exiting turn 1, Robertson attempted to make a run at the lead.  He then lost control under braking and hit Senna.  The contact resulted in both Robertson and Senna spinning out.  A number of other teams, including Toyota GAZOO Racing’s No. 8 with Kazuki Nakajima at the wheel, were forced to take avoiding action.

Not the race start that was expected for the Rebels…but be sure that they will FIGHT BACK! ???#WEC #8HBahrain @RebellionRacing pic.twitter.com/qIxe8O7Hj3

Conway was able to move to the inside and took the lead just that easily.  The incident gave Conway an additional cushion as three LMP2 cars put themselves between the No. 7 and Team LNT’s No. 6 Ginetta.  Despite avoiding the wreck, Nakajima had to make a stop for service.  That put the No. 8 way behind, a margin that they ultimately were never able to pull back.

A safety car period was brought out to clean up the track after the incident.  Once the race resumed, Conway proceeded to drive away from the field.  It wasn’t long before the No. 7 was 30 seconds ahead of second.

Despite the first-lap incident, Rebellion Racing was likely going to be the biggest challenger to Toyota’s No. 7.  However, a gear shifting issue cost the team three laps in the pits.  That dropped out right out of the hunt.  As for the Ginettas, they both fell victim to their own gearbox problems, retiring separately.

The No. 7 Toyota was able to hold on to take the overall victory by more than a lap over the No. 8 of Nakajima, Sebastien Buemi and Brendon Hartley.  Rebellion Racing’s Senna, Gustavo Menezes and Norman Nato ended up third, three laps down.

In LMP2, United Autosports dominated the entire weekend.  Paul Di Resta and Phil Hanson teamed up to win the class pole from Friday, then ran a masterful race Saturday.

Di Resta was able to avoid the opening-lap crash and move all the way up to second overall.  He even briefly pressured Conway for the overall lead, using his slightly power advantage when the Toyota is not using hybrid power.

Tire wear was rather noticeable in Bahrain, leading to teams having differing strategies.  United Autosports tried to frontload a number of their tire changes, which allowed them to extend their lead.

The problem with such a strategy is that you would be racing on somewhat worn tires towards the end of the race.  Teams were only allowed six sets of tires for the entire eight hours, so some conservation would be required.

For the final couple of hours, Di Resta, Hanson and Filipe Albuquerque felt the pressure from JOTA Sport’s No. 38 ORECA 07-Gibson.  United Autosports was on Michelin tires, while JOTA Sport were running Goodyears, which seemed to have slightly better wear.

Despite the tire disparity, Albuquerque was able to open up the lead a little in the final laps and hold on for the team’s first win of the year.

GTE-Pro was the most competitive of the four classes.  For much of the weekend, it seemed to be a Porsche benefit.  Then, the race started.

AF Corse’s James Calado was able to get past the Porsches at the start while avoiding the aforementioned wreck to take the class lead.  Despite the Porsche strengths, they combined to lead only lap for the entire race.

Instead, the race ended up being a duel between the two AF Corse Ferraris and Aston Martin Racing’s No. 95 shared by Nicki Thiim and Marco Sorensen.  Aston Martin first took the lead when Calado pitted just over an hour into the race.  The No. 51 would not get the lead back.

Meanwhile, Thiim and Sorensen had a fierce battle with the No. 71 Ferrari of Miguel Molina and Davide Rigon.  The two drivers ran nose-to-tail, even pitting together with just over two hours to go.  Thiim was able to jump Rigon in the pits, but Rigon got Thiim back a few laps later.

Ultimately, the race for the class win came down to a penalty.  On his final stop, Rigon accidentally let his wheels spin while on the jacks.  That is not allowed.  Rigon was forced to serve a drive-through penalty, which allowed Thiim and Sorenson to take the class win.

Rigon and Molina were second, 13.798 seconds back.  Alex Lynn and Maxime Martin came from the rear of the field to finish third, followed by AF Corse’s No. 51 Ferrari of Calado and Alessandro Pier Guidi.

GTE-Am was dominated by Team Project 1’s No. 57 Porsche shared by Jeroen Bleekemolen, Ben Keating and Larry Ten Voorde.  The team led early on, buoyed by a long triple stint in the car for Keating.

Their primary competition was Aston Martin Racing’s No. 98 for Paul Dalla Lana, Ross Gunn and Darren Turner.  Gunn, in particular, was very quick.  Gunn’s best laps during the race were right up there with the GTE-Pro teams despite older equipment.

Other potential contenders fell by the wayside.  Dempsey-Proton Racing’s No. 88 crashed out of the race at halfway with Khaled Al Qubaisi at the wheel.  Others ran into more rudimentary issues.

Outside of pit stop sequences, Team Project 1 had the lead for good with a couple of hours to go.  Ten Voorde was able to hold on over the final hour to give the former IMSA teammates their first GTE-Am class victory after losing the class victory at Le Mans in June.

The margin of victory was 37.327 seconds over the No. 98 Aston Martin.  Gulf Racing’s No. 86 Porsche of Ben Barker, Michael Wainwright and Anthony Watson were third, a minute back.  AF Corse’s two GTE-Am entries were fourth and fifth, respectively.

The FIA World Endurance Championship will take a couple of months off for the upcoming holidays.  They will be back in action at Circuit of the Americas in Texas for the Lone Star Le Mans, a race that was only added to the schedule a couple of weeks ago when the 6 Hours of Sao Paulo was cancelled.  The race will be on Feb. 23.