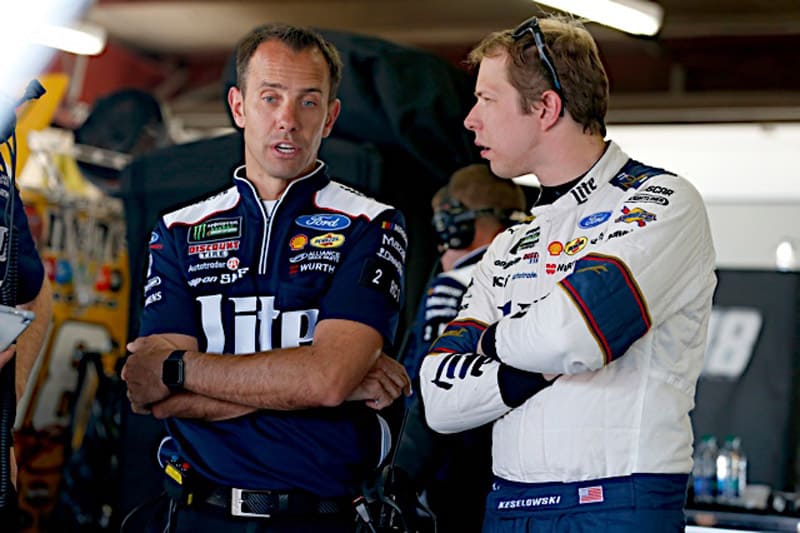 2019 was what has come to be the standard season for Brad Keselowski over the last handful of years.

The 2012 NASCAR Cup Series champion won three races in 2019, his third year in a row winning three times. He finished eighth in points, just like he did in 2018. He had one less top five than last year, but he also had one more top 10 this year. He had stretches of the season where he looked unbeatable, just as he had done in four of the five prior seasons. And once again, Keselowski failed make the Championship 4 in the playoffs, something he has only managed to do once since the elimination format’s inception in 2014.

The difference of this season was Keselowski hit a lot of milestones while having his standard year, which curves his grade for the season slightly.

Ever since his 2012 title, Keselowski’s career has sort of mirrored that of the guy who made the Team Penske No. 2 famous, Rusty Wallace. He’s been good for a couple wins a year and is a threat just about everywhere, but for whatever reason, he hasn’t been a major threat for the championship.

Through the first third of the season, Keselowski seemed poised for a championship run based on results alone. In the opening 12 races, he won three times and came just shy of winning a fourth in that span when he narrowly lost to Penske teammate Joey Logano at Las Vegas Motor Speedway. But Keselowski leaves 2019 with a 24-race winless streak. To the casual observer, it would seem Keselowski started the year strong but the team wasn’t as fast down the stretch. But the team never really had the speed to contend for the title. The signs were there in the early portion that the No. 2 Ford was just a top-10 car and nothing more, but good strategy and luck disguised the team as a Championship 4 contender.

The first of those wins came at Atlanta Motor Speedway in the second race of the year. Kyle Larson was the dominant car, but a pit road speeding penalty on the No. 42 handed the win to Keselowski. But it was still a power move for the Michigan native, who overcame a bout with the flu to win the race.

“[Felt] good enough to get the job done,” Keselowski said. “My wife took great care of me along with everyone in the care center. This is one I’m not going to forget for a very long time.”

This year’s win at Atlanta was special. Not just because it was the first ? of 2019, but because of the 200+ military members who were along for the ride with me. Excited to do it again: https://t.co/7rEnzVvlT6#Tribute2Veterans pic.twitter.com/BFR7cynT3H

Didn’t realize how much weight I lost from being sick last week till buckling in the car today. Thought the team had the wrong stuff in the car but didn’t. Seat belts don’t lie… pic.twitter.com/hr9YphJorG

This was likely the most significant of Keselowski’s 2019 wins for several reasons. It was Keselowski’s 60th win for Penske across the Cup and Xfinity series, breaking his tie with Mark Donohue for most wins for the Captain. It was the first race in the Cup Series’ tapered-spacer package that restricts the horse power to 550 horsepower, and it was also the first official win for Mustang, which Ford started using in the Cup Series in 2019 (I say first official win because Bobby Allison won in a Mustang at Bowman-Gray Stadium in 1971 but still hasn’t been credited with it).

The latter two of those accomplishments were strong statements by Penske and likely led many to believe 2019 was the year for the No. 2. Keselowski backed up those claims with the second place at Las Vegas and the most dominant performance of his career in the spring race at Martinsville Speedway. He led 446 of 500 laps en route to his second career win at Martinsville. Of his 1,085 laps led in 2019, Keselowski accounted for 41% of them in this race.

Keselowski’s last win of the year came at the spring Kansas Speedway race and couldn’t have been more different than the Martinsville performance. This time, Keselowski only led 12 laps but got the lead when it mattered. The Kansas win was the 30th of Keselowski’s Cup career, likely securing him as a future NASCAR Hall of Famer.

With everything going on, win #30 got lost in my mind. It’s a huge number to me personally & the sport. I try not to be a “stat guy” but If you look at the list of drivers that have 30+ wins. Wow

I feel blessed to have cars & a team even capable to do that it in the cup series. https://t.co/svLhT2NZbj

Despite Martinsville being the only race where he had the fastest car, Keselowski was off to the best start of his career. He even showed off his trick-shot abilities during this span when he transformed a spin entering Talladega Superspeedway’s pit road into a perfect parking job in his pit box backward.

He also accomplished a rare feat in today’s NASCAR in that he didn’t have a single speeding penalty all year — that’s surely worth a few points on the grading scale.

But the true No. 2 team was revealed in the middle portion of the season. In the nine-race stretch from the June Pocono Raceway race to Watkins Glen International, Keselowski only scored two top fives and led 25 laps.

Despite not winning during this span, the August-September stretch was where Keselowski showed the most speed in 2019. From the Bristol night race through the first round of the playoffs, Keselowski scored five top fives in six races with the lone exception being a scary wreck at Indianapolis Motor Speedway. This easily advanced the No. 2 driver to the Round of 12.

Are you kidding me, why the fuck is there a blunt wall with tire barriers on it? Who the hell thought that was a good idea? These people need to be brought onto the front stretch and ran the fuck over one by one. This is dumb

The key to that August-September period was the short tracks of Bristol Motor Speedway and Richmond Raceway. Keselowski led a combined 180 laps between those two races en route to finishes of third and fourth. Penske’s short track package was perhaps its best in 2019, as Keselowski led 31 or more laps in five of the six short track races and finished in the top five in four of them. The No. 2 Ford didn’t have anything for the Joe Gibbs Racing Toyotas on short tracks, but it was probably in the second tier.

One thing that really hampered Keselowski’s season was the part he’s usually the best at: superspeedway racing. In the four superspeedway races in 2019, Keselowski’s best finish was 12th — a far cry from what the six-time superspeedway winner is used to. He was involved in crashes in three of the races, including the playoff race at Talladega Superspeedway. The 2012 Cup champion has twice won the fall Talladega race to advance him to the Round of 8, so crashing out to finish 25th was a huge blow to his postseason. NASCAR switched from using restrictor plates to tapered spacers at superspeedways (giving them over 100 more horsepower) starting with the spring Talladega race, and it’s possible Keselowski hasn’t adapted to the new superspeedway package just yet. But he did at least hold good on his promise to wreck anyone who blocked him.

“I’m not lifting,” Keselowski said to reporters. “I’m tired of getting wrecked at these [superspeedway] tracks. They’re all watching. They know.”

Even with the midseason and superspeedway struggles, Keselowski could have changed the whole outlook of his season with a solid run in the Round of 12 finale at Kansas. But despite returning to the track he won at earlier in the season, despite racing on an intermediate track where two of his three 2019 wins occurred and despite entering the race with a 24-point cushion over the cutline, Keselowski did not advance. The car lacked speed, and he finished 19th in that race.

And that result wasn’t a fluke. For whatever reason, even if Keselowski did win at Atlanta and the spring Kansas race and have good results at other 1.5-mile tracks, Penske as a whole lacked speed at the intermediate tracks. Those tracks make up a nearly one third of the season, so if you can’t perform well at them then you’re lucky to finish eighth in points like Keselowski did. Evidently, the Penske cars didn’t adapt as well to the tapered-spacer package as some other teams, hence none of the three Penske cars made the Championship 4 for the first time since 2015.

So essentially, Keselowski exceeded expectations given what he was working with. 2019 was the year of the Toyota, but don’t expect a combination as historically great as Keselowski, Penske and crew chief Paul Wolfe to stay down for long. 2020 could be a bounce-back year, if you can consider a three-win season a down year.

“There’s a lot of people that would be happy to have three wins,” Keselowski said. “I’d be a lot happier to have four or five wins and a shot at the championship, but that’s not the reality. I try really hard to be thankful for what I’ve got.”

That look when you tell a dad joke in a girl filled household ??‍♂️?? pic.twitter.com/mCXadHnDhy

Regardless of any results on the racetrack, 2019 will always be a memorable year for Keselowski, as he achieved his greatest accomplishments of the year just a few weeks after the season ended: two-time dad.

Love my girls. Welcome to the family, Autumn! pic.twitter.com/h5vIHBt18A