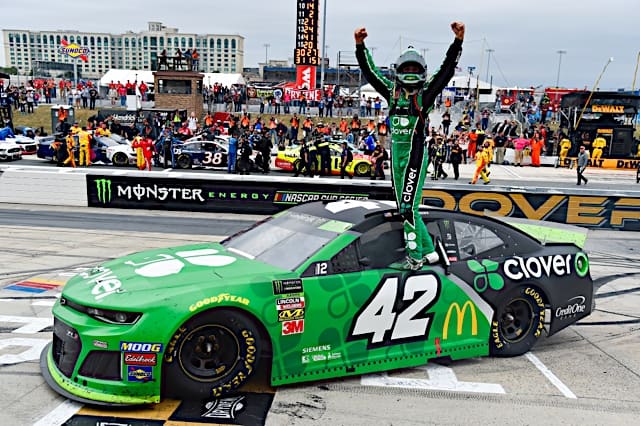 Perseverance: continued effort to do or achieve something despite difficulties, failure or opposition : the action or condition or an instance of persevering : steadfastness

Perseverance is exactly what Kyle Larson carried with him throughout the 2019 NASCAR Cup Series season.

As was the case with many drivers, Larson endured crashes, pit road penalties and an ill-handling Chevrolet Camaro. But for someone in well-funded equipment, he had experienced something every driver dreads: a drought. Larson entered the 2019 season searching for a win, as he last went to victory lane at Richmond Raceway in September 2017.

Oh, but he had come close. Out of 12 top fives and 19 top 10s in 2018, seven were second-place finishes. Yes, that included the slide job heard ’round the world. He added a couple more runner-up results the following year.

This past season started off on the right foot, as he finished seventh in the Daytona 500. However, in three of the next four races the Chip Ganassi Racing driver was 12th. That was where the team’s mistakes began. At Atlanta Motor Speedway, Larson led 142 laps and won the first stage, but on lap 223 he incurred a speeding penalty. Even though he recovered to a 12th-place finish, he probably should’ve won.

Then the following week at Las Vegas Motor Speedway, a crew member’s hand over the wall again proved to be costly. NASCAR officials docked him for too many members over the wall, and he rallied to another 12th place.

After getting a sixth at ISM Raceway, Larson wouldn’t see a top 10 for the next six races. Here’s what happened to him at Texas Motor Speedway:

Larson had hit the wall on lap 147, and flames came up underneath the car. He retired from that race in last place.

Two events later at Richmond Raceway, Larson was battling Daniel Hemric for positions when they made contact. He cut a tire down and went to pit road, but ended up crashing soon after. This also resulted in a last-place finish.

Then came Talladega Superspeedway. Larson was looking to complete the spring event when Larson flipped on the backstretch on the very last lap. It was his third crash in 10 races on the year.

Kyle Larson was OK after this violent crash and flip on the last lap at Talladega.@NASCARonNBC #NASCAR #GEICO500 pic.twitter.com/poIlbe4m2Z

All was not lost, however, for just around the corner was one of his better tracks. In May at Dover International Speedway, Larson finished where he started in third place. It was some much-needed relief from mistakes and wrecks. He then followed that up with an eighth at Kansas Speedway before the All-Star break.

After winning the Monster Energy Open, Larson set his sights on the $1 million prize. Some quick pit stops and a fast racecar helped him get to the front. Then, on a restart with 12 laps to go, he received a push from Kevin Harvick to soar to the lead. Harvick couldn’t catch him, and Larson reigned.

Although it didn’t count for points, it was still a major confidence booster for him and his team.

Good thing, too, since he had another crash the next week in the Coca-Cola 600. He got loose and collected several cars, including Austin Dillon, Ty Dillon and Ryan Preece.

His bad luck continued on to the June Pocono Raceway event. Despite winning the first two stages and leading 35 laps, a late restart put him behind. He tried to make a move and ended up hitting Clint Bowyer and the outside wall. Larson’s pit crew fixed the car; however, he ended the race one lap down in 26th.

The rest of the summer was fairly kind to him, except for another incident at New Hampshire Motor Speedway. At Sonoma Raceway, Larson earned his third straight pole and earned valuable stage points.  It was a solid finish for the No. 42 CGR team.

Then at the end of June, Larson battled with Alex Bowman for the lead at Chicagoland Speedway. Larson knew the runner-up feeling all too well here, as this was where the slide job was born. He was gutted that he didn’t win but was happy for Bowman capturing his first.

The race at Kentucky Speedway was one of the few times in which both CGR teams finished in the top five. On a late-race restart, Larson pushed his cohort Kurt Busch, who in turn battled his brother for the win. Larson finished fourth, but it was still a good night for the organization.

One thing about this period was that Larson began to learn from his mistakes and rally back for good results. For example, at the second Pocono weekend Larson crashed 10 minutes into first practice and went to a backup. Even though he came from the back, he still earned another top five. It was a testament to how much he and his team learned and grew together.

The group maintained good results for the next four races. However, at Indianapolis Motor Speedway Larson got loose off a corner and hit the inside wall. His day was done, but he still made it into the playoffs.

After finishing eighth and sixth at Las Vegas and Richmond, an odd penalty occurred at the Charlotte ROVAL. Right after Larson won the first stage, somehow a crew member’s hand went over the line as he was still working on the car. NASCAR had him stay in his pit stall for one full lap; as a result, Larson fell behind. He could only rally back for 13th place.

By the way, did I mention Dover was one of his better tracks?

There was the culmination of his perseverance, right at the Monster Mile. In the stage two break, Larson took advantage of a slow pit stop from Martin Truex Jr.’s pit crew to snag the lead off pit road. He then led 154 laps to earn not only his first victory in 75 races but also his first playoff victory.

Though he locked himself in to the next round of the playoffs, he didn’t move on to the Championship 4. He injured his ribs in a crash at Talladega, which might have affected his performance slightly in the next segment.

One more incident that may have ended his chances to earn points came at Texas Motor Speedway. Bubba Wallace spun out to bring out the caution and to keep him from going a lap down. However, this was during green-flag pit stops. Larson did what he could to make up lost positions, but he ended up 12th.

He unfortunately ended the season on a sour note; his engine blew early at Homestead-Miami Speedway.

Next year he will want to clean up all those mistakes he and the team made. Now that he has that win under his belt, he will want even more. His contract ends after the 2020 season, but as long as he keeps persevering, he should be renewed.