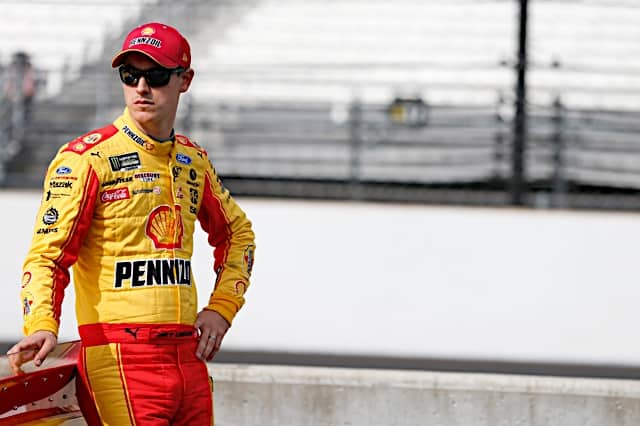 For such a young man approaching the age of 30, Joey Logano’s 2019  NASCAR Cup Series season had the makings of a lesson in maturity. Not only will he and his wife soon welcome a second baby into their family, but Logano also addressed changes in his personal health. In September, he announced being diagnosed with alopecia areata, an auto-immune disorder that manifests itself in patches of hair loss, and he was seen wearing prescription eyeglasses starting at Talladega Superspeedway in October.

The only thing missing?  His AARP card.

Oh, and a repeat Cup championship.

Joey Logano’s 2019 behind the wheel of the Team Penske No. 22 Ford Mustang was a combination of controversy and consistency. Despite not advancing to the Championship 4 during the playoffs, the 12-year Cup veteran from Connecticut found himself amid public criticism for driving hard in hopes of securing his second points title.

The 2019 season got off to a strong start as Logano scored 11 top-10 finishes in the first 15 races on the schedule, including wins at Las Vegas Motor Speedway in March and at Michigan International Speedway in June after starting from the pole. This kind of consistency kept him in the championship hunt all year long; Logano earned top-five finishes in one-third of the races on the calendar (12 out of 36 events for a 33.3% season average) and tallied 21 top-10 performances (for a 58.3% average).

So much time spent near the front rekindled Logano’s long-standing feud with Denny Hamlin (one dating back to 2013), a dispute that boiled over into a post-race wrestling match between both drivers and their pit crews following contact during the First Data 500 at Martinsville Speedway in October. The physical altercation was fueled, in large part, by an on-track incident between the two drivers during the Drydene 400 at Dover International Speedway earlier that month. Logano wound up 34th in that race, making it his worst Cup finish in 2019.

Six top-10 finishes during the postseason was enough to park Logano fifth in the 2019 point standings, keeping a second-consecutive championship just out of reach. Consistency like we saw from the Penske driver would have earned him a third-place in points under the old championship structure, but such was not the case given the high-pressure, elimination-style format used by NASCAR today.

Not that Logano was content to lick his wounds after the 2019 Cup season. In November, he established a new world’s record for the distance covered by a Hot Wheels car – an impressive 1,941 ft. Making the record-setting run more meaningful was the fact that Hot Wheels cars were an important part of Logano’s youth; his love of these toys has subsequently been passed on to his son, Hudson, and will be commemorated in a special-edition Ford Mustang scheduled to debut next year.

Logano wrapped up 2019 by getting his hands on yet another car scheduled to debut in 2020:  the Next Gen configuration that’s slated for release in July. Logano spent two days in December testing the car at ISM Raceway, a follow-up of sorts to test runs made by Austin Dillon at Richmond Raceway earlier in the season. Logano’s evaluation of the new design suggested that Cup drivers will face greater competitive challenges once the car becomes standard equipment.

Maybe the ISM tests were a fitting way for Logano to end his 2019 racing season. Addressing myriad situations both on-track as well as off seemed to reflect Logano’s defense of his 2018 Cup title. As we witnessed throughout the year, trying to win his second Cup championship was a struggle despite the consistency Logano exhibited over the 36-race schedule.

Age brings wisdom and experience, but that doesn’t equate with life getting any easier. As Logano’s 2019 Cup campaign demonstrated, past successes can be difficult to replicate. Let’s hope turning 30 brings renewed hope.