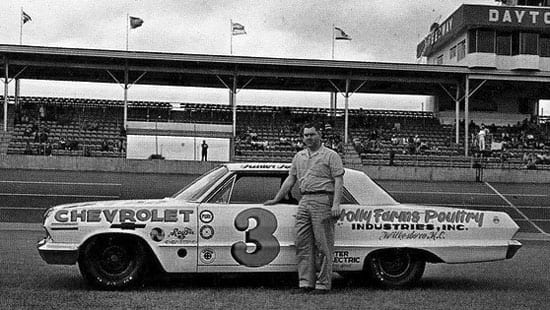 NASCAR legend and Hall of Famer Junior Johnson has passed away at age 88, according to a Friday report on NASCAR.com.

Robert Glenn Johnson Jr. racked up 50 NASCAR Cup Series wins over the course of his 14-year driving career, including a 1960 Daytona 500 triumph and 13 victories in the 1965 season.

The moonshine runner-turned-icon was a member of the NASCAR Hall of Fame’s first class in 2010 and become an owner after his retirement from driving. He won two additional Daytona 500s in his ownership role, those victories coming in 1969 and 1977 courtesy of LeeRoy Yarbrough and Cale Yarborough respectively. Johnson is also credited with the first use of drafting in NASCAR.

“Junior Johnson truly was the ‘Last American Hero,’” NASCAR Chairman and CEO Jim France said in a statement. “Between his on-track accomplishments and his introduction of Winston to the sport, few have contributed to the success of NASCAR as Junior has. The entire NASCAR family is saddened by the loss of a true giant of our sport, and we offer our deepest condolences to Junior’s family and friends during this difficult time.”

The driver had reportedly entered hospice care this week after his health began to decline, according to NASCAR.com.

After a broken arm cut his baseball aspirations short, Johnson was named one of NASCAR’s 50 Greatest Drivers during the sport’s golden anniversary year in 1998.

His first opportunity behind the wheel came at Darlington Speedway in 1953. Johnson finished that year’s Southern 500 in 38th, but scored five wins two years later in 1955.

Heralded as ‘The Last American Hero,” Johnson was profiled by Tom Wolfe in Esquire and the piece received a film adaptation in 1973. With the movie titled after his nickname, Johnson served as a technical advisor on the film and was portrayed by Jeff Bridges.

Johnson is survived by his wife, Lisa, as well as his two children, Meredith Suzanne and Robert Glenn Johnson III.

Johnson was a stalwart gentleman of nascar’s greatest days. Sad to hear

No, millennial fans (if there are any), he’s not Jimmie’s grandfather.

I’ve got 2 autographed bottles of Midnight Moon that Junior signed a few years ago. Time to raise a few for Junior. R.I.P.

Wonder if this (his death) will increase his chances of getting in the HOF.

Oops, my bad, he already is in the HOF.

No mention of Flossie Johnson?

Along with the Wood brothers and Smokey Yunick, probably one of the smartest men in Mascar. A true original and a real gentleman.

He won the first race I attended in 1963 at Charlotte. Along the way, I have had the honor of meeting and speaking with him several times. Always the gentleman and gracious to the fan. He earned everything he owned and today would have been relegated to the dirt tracks and not given the chance to compete on the big stage.
HOWEVER, every one of these drivers today owe $0.40 of every $1.00 they earn to folks like Junior Johnson, Fireball Roberts, Fred Lorenzen. Even more to Richard Petty, Lee Petty, David Pearson. Put Curtis Turner in that group as well. Had to great luck to see all of them race, except Lee Petty. The sport evolves, but drivers and owners like Junior Johnson will not come along again. I have been very lucky.