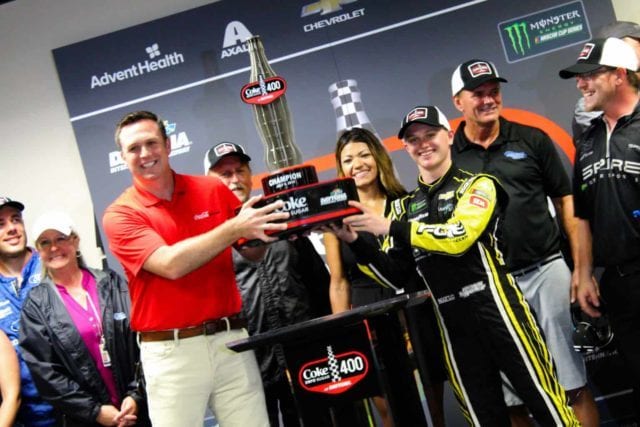 The NASCAR Cup Series’ newest team made a major impact in the 2019 season in multiple ways.

With support from Premium Motorsports, Spire Motorsports turned 2019 into a success story — often a tall order for a first-year team. With a total of eight drivers behind the wheel, the No. 77 team earned one victory in the rain-shortened Coke Zero Sugar 400 with Justin Haley and seven finishes 30th or better. The team also contributed to the final race of Jamie McMurray‘s Cup career.

Completing 61% of the season’s races, Spire can’t label 2019 as a failure. It came out of nowhere when Furniture Row Racing sold its No. 78 charter in December 2018. Though new to the ownership label, Spire has been a crucial part of the motorsports world representing drivers, teams, sponsors, manufacturers and tracks on the marketing side. Spire teamed up with one of its clients in the form of Chip Ganassi Racing to kick off the 2019 season with NASCAR veteran McMurray.

The team’s highlight was being in the right place at the right time. As rain and dark clouds loomed near Daytona during the July 4 race weekend, the team made the call to keep Haley out while many decided to pit. That was the race-winning move, as NASCAR declared the race official and Haley was told to report to the makeshift victory lane in the media center. It was Haley’s first career Cup win and came while he was competing part time in the series, running the full schedule for Kaulig Racing in the Xfinity Series.

A low note in the team’s season came after the conclusion of it. The organization was a part of the three-team penalty for manipulation of the championship race. TJ Puchyr, owner of Spire Motorsports, was fined $50,000 and 50 owners points for being involved in the manipulation to assist with Premium to earn the best of the unchartered drivers in the season finale at Homestead-Miami Speedway.

The team’s formation came out of nowhere, and despite not being a giant impact in the 2019 season, it still left one. With one victory in the bag, Spire is ahead of the game, and it’s depending on the future of the sport and the Next Gen car. Things could either go very well for the organization as both the sport and the things growing around it, or it could become just another team of the past.