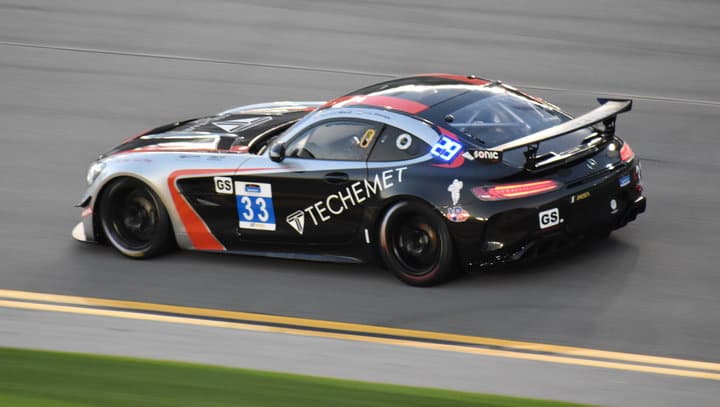 Michelin Pilot Challenge testing Friday (Jan. 3) at Daytona International Speedway saw just one team atop the charts for the vast majority of the day.  That team was Winward Racing/HTP Motorsport, which was fastest in both sessions.

In the morning session, Indy Dontje topped the charts with a lap early on at 112.322 mph in his Mercedes-AMG GT4.  That lap held up to be the fastest lap of the day, despite being two seconds off of the pole for last year’s race.

Dontje’s lap was nearly two-thirds of a second faster than Philip Ellis in the second Winward Racing/HTP Motorsport Mercedes.  Bill Auberlen was third fastest in Turner Motorsport’s No. 96 BMW, while Trent Hindman was fastest of the Porsches in fourth.  Thomas Collingwood was fifth fastest in BGB Motorsports’ Porsche.

Matt Plumb was sixth in Team TGM’s No. 46 Chevrolet Camaro GT4.R, followed by Marco Signorelli in the best of the Ford Mustang GT4s.  Eric Foss was eighth in his Mercedes, then Dylan Murry in the Riley Motorsports entry.  Austin Cindric was 10th in Multimatic Motorsports’ No. 15 Ford.  Hailie Deegan did the lion’s share of driving in Multimatic Motorsports’ No. 22 Ford, which she will share with Chase Briscoe.  Deegan ended up 14th quickest.

TCR saw Alexandre Premat top the charts in his Team Premat Audi with a lap at 106.355 mph, good for 28th overall.  Premat’s lap was one-eighth of a second faster than Tim Lewis Jr. in an Alfa Romeo Giuletta TCR.  Taylor Hagler, driving the No. 77 Honda for LA Honda World Racing, was third fastest in her first official IMSA session.  Mark Wilkins was fourth in his Hyundai, while Mat Pombo was fifth in the No. 73 Honda.

In the 60-minute afternoon session, it was once again Winward Racing/HTP Motorsport’s No. 33 Mercedes on top of the chart.  This time, it was Russell Ward that was fastest with a lap at 111.261 mph.

Ward’s lap was almost two-tenths of a second faster than Turner Motorsport’s Robby Foley.  Collingwood backed up his pace from the first session to time in third in the afternoon, while Cindric was fourth.  Team Hardpoint’s Spencer Pumpelly rounded out the top five.

Foss was sixth fastest, followed by Plumb and Jeroen Bleekemolen in the Riley Motorsports Mercedes.  Deegan moved up to ninth in the afternoon, while Murillo Racing’s Justin Piscitell was 10th.

Premat picked up the pace a little bit in the afternoon to once again top the TCR class with a lap at 106.506 mph.  The lap, good for 25th overall, was more than a quarter of a second faster than Roy Block in the No. 5 Alfa Romeo.  Stephen Simpson was third fastest in the JDC-Miller MotorSports Audi that sat out the first session, while Ryan Norman was fourth in Bryan Herta Autosport’s No. 21 Hyundai.  Hagler was fifth quickest.

Michelin Pilot Challenge teams have two practices scheduled for Saturday, both of which will be 45 minutes in length.  The first of those sessions is scheduled for 9:15 a.m.