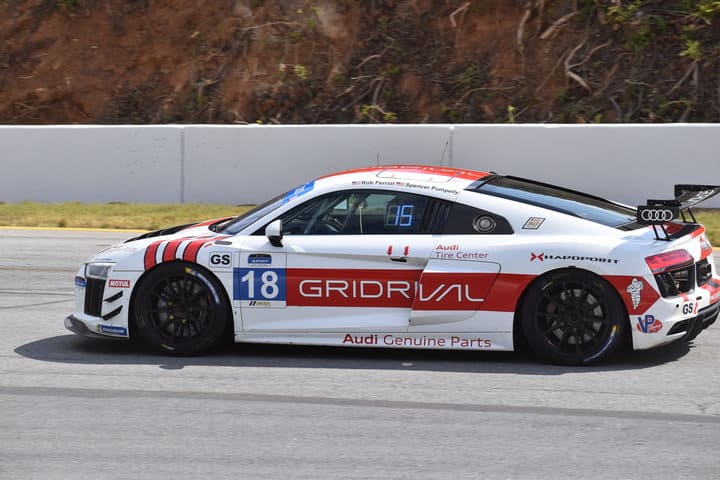 For much of the weekend, Winward Racing/HTP Motorsport has dominated the charts.  Saturday afternoon, things changed when Spencer Pumpelly took his Audi R8 LMS GT4 for Team Hardpoint to the top of the sheet with a lap at 111.366 mph.

In the morning session Saturday, Indy Dontje picked right up where he left off Friday, topping the first session of the day with a lap at 111.109 mph in his Mercedes-AMG GT4.  Dontje’s lap was six-hundredths of a second faster than teammate Philip Ellis, who will make his IMSA Michelin Pilot Challenge race debut in a couple of weeks.

Murillo Racing’s Eric Foss was third quickest in his Mercedes, while Scott Maxwell was fourth in the No. 19 Ford under the Multimatic Motorsports banner.  In reality, Maxwell’s car is a second Ford Mustang GT4 fielded by PF Racing; this was the car that PF Racing ran for Shane Lewis in the final SRO America weekend of 2019 in Las Vegas after Robinson Racing shut down.  Chase Briscoe was fifth in the No. 22 Multimatic-fielded Ford.

Austin Cindric was sixth quickest in his Ford, followed by Kuno Wittmer in the Andrew Wojteczko Autosport (AWA) McLaren 570S GT4.  Trent Hindman was eighth in the Archangel Motorsports Porsche, while Matt Plumb was ninth in Team TGM’s No. 46 Chevrolet Camaro GT4.R (acquired from the aforementioned Robinson Racing).  Pumpelly was 10th quickest.

KMW Motorsports with TMR Engineering’s Tim Lewis Jr. was fastest in TCR with a lap at 106.242 mph, good for 28th overall.  Lewis’ lap was nearly six-tenths of a second faster than Roadshagger Racing’s Gavin Ernstone, who had sat out all of Friday.  Team Premat’s Stephen Vajda was third in his Audi, followed by JDC-Miller MotorSports’ Stephen Simpson.  LA Honda World Racing’s Mat Pombo was fifth quickest.

In the afternoon session, a number of driver swapped the top spot on the chart around during the 45-minute session.  However, Pumpelly’s lap at 111.366 mph 15 minutes into the session held up as the fastest lap of the day.

Pumpelly’s lap was four-hundredths of a second faster than Multimatic Motorsports’ Sebastien Priaulx in the No. 15 Ford Mustang GT4.   Briscoe was third fastest, followed by BimmerWorld Racing’s Dillon Machavern and the Chevrolet of Rebel Rock Racing’s Robin Liddell.

Dontje was sixth fastest in his Mercedes, then Ellis, Foss and Plumb.  CarBahn with Peregine Racing’s Jeff Westphal ended up 10th fastest.

Lewis was once again fastest in TCR, this time with a lap at 106.229 mph.  The lap, good for 27th overall, was less than two-hundredths of a second slower than the lap that topped TCR in Session No. 3.

Unlike the morning session, it was not a dominant time.  Simpson was a mere five-thousandths of a second slower in second.  Bryan Herta Autosport’s Mark Wilkins was third fastest in his Hyundai, with Pombo immediately behind.  Jon Morley in the Roadshagger Audi was fifth.

Sunday will see Michelin Pilot Challenge teams take to the track for two more on-track sessions.  The first one, 75 minutes in length, is scheduled to start bright and early at 9 a.m.