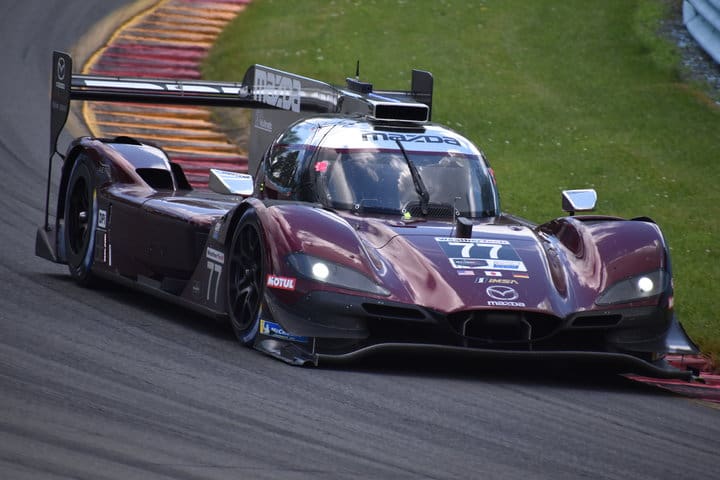 Pla’s lap was two-tenths of a second faster than Acura Team Penske’s Ricky Taylor.  Juan Pablo Montoya was just two-hundredths of a second behind Taylor, a reversal from the team’s struggles earlier in the weekend.  Felipe Nasr was fourth in the best of the Cadillacs, while Jonathan Bomarito was fifth in the second Mazda RT24-P.

What does Mazda Team Joest get for having the fastest qualifying time at the ROAR, in addition to bragging rights?  They get the first garage stall when you enter off of pit road and first pick of pit stalls.  They will likely select the first stall at the entrance to pit road since it’s closest to the garage.

In GT Le Mans, you couldn’t have made the qualifying session much closer.  Risi Competizione’s James Calado was fastest in class with a lap at 124.809 mph.  That was good enough for pole by the absolute slimmest of margins.  Calado beat out Porsche GT Team’s Nick Tandy by just one-thousandth of a second over 3.56 miles.  Corvette Racing’s Tommy Milner was third, followed by BMW Team RLL’s Jesse Krohn and Porsche GT Team’s Laurens Vanthoor.  The entire class was separated by less than half a second.

The qualifying session for LMP2 and GT Daytona teams took place Saturday (Jan. 4) shortly after Session No. 4 was completed.  Given the rain that had fallen earlier on Saturday, conditions were not exactly suitable for the best lap times.  In addition, IMSA rules require LMP2 teams to have their bronze-rated driver qualify the car.  GT Daytona rules are not quite as strict, allowing bronze or silver-rated drivers to qualify.

PR1 Mathiasen Motorsports’ Ben Keating was fastest in class with a lap at 130.701 mph.  The lap was nearly two-thirds of a second faster than DragonSpeed’s Henrik Hedman.  Performance Tech Motorsports’ Kyle Masson was third quickest, followed by Tower Motorsport by Starworks’ John Farano.  Later on, Masson’s times were thrown out because he shouldn’t have been in the car.  Masson is silver-rated and thus barred from qualifying.

It was in GT Daytona where the interesting things happened.  AVS Vasser Sullivan’s Frankie Montecalvo was able to back up his pace from Session No. 4 to be fastest in qualifying with a lap at 120.052 mph.

Montecalvo’s lap was one-eighth of a second faster than Meyer Shank Racing with Curb-Agajanian’s Matt McMurry.  Turner Motorsport’s Robby Foley was third in the sole BMW M6 GT3, while Precision Performance Motorsports’ Brandon Gdovic was fourth in his Lamborghini.  Trent Hindman was fifth quickest in the Heinricher Racing Acura.

Then, inspection occurred.  A few hours later, IMSA announced that all of the Lamborghinis except for the Paul Miller Racing No. 48 qualified by Madison Snow had their times disallowed as per Section 9.11.5c of the 2020 IMSA Technical Regulations for the GT Daytona class.  This requires a Daytona exclusive gear ratio be used.  The offending teams were apparently running a more typical gear ratio for other races.

As a result, Gdovic lost his fourth-place effort.  Hindman moved up to fourth, while Scuderia Corsa’s Jeff Westphal inherited fifth.

After struggling for much of the weekend, Acura Team Penske’s Ricky Taylor turned in the fastest regular session time of the weekend Sunday morning (Jan. 5) at Daytona International Speedway.  Taylor’s lap at 136.898 mph is marginally faster than last year’s pole speed.

Taylor’s quick time was one-sixth of a second faster than Montoya.  Pla was third fastest, followed by the Cadillac of Nasr.  JDC-Miller MotorSports’ Tristan Vautier was fifth quickest.

DragonSpeed continued to show the speed necessary to defend their class victory.  Ben Hanley set the quickest LMP2 time of the whole weekend, a lap at 134.707 mph, to top the class.  The lap was two-thirds of a second faster than Tower Motorsport by Starworks’ Nicolas Lapierre.  PR1 Mathiasen Motorsports’ Simon Trummer was third fastest, while Era Motorsport’s Nicolas Minassian was fourth.

GT Le Mans saw Risi Competizione’s Daniel Serra turn in the best lap at 124.592 mph, good for 14th overall.  Serra’s lap was one-eighth of a second faster than Vanthoor.  Tandy was third quickest in the second Porsche, while BMW Team RLL’s Philipp Eng was right behind.  Milner was fifth.

Much like in the prototype classes, the cooler temperatures on tap Sunday morning resulted in the best GT Daytona laps of the weekend.  Paul Miller Racing’s Bryan Sellers was fastest with a lap at 121.684 mph, good for 21st overall.  Sellers’ lap was a half-second faster than the Porsche of PFAFF Motorsports’ Dennis Olsen, repaired after an off-course excursion on Saturday.

The Acura of Heinricher Racing with MSR Curb-Agajanian’s Alvaro Parente was third fastest, followed by Gdovic and WRT Speedstar’s Mirko Bortolotti in the sole Audi.

The session also saw trouble for GRT Grasser Racing Team.  Steijn Schothorst spun the No. 11 Lamborghini Huracan in West Bend and backed into the tires, damaging his car.  Schothorst was ok, but the day was over for the Grasser squad.

IMSA WEATHERTECH SPORTSCAR CHAMPIONSHIP ROAR BEFORE THE 24 SESSION NO. 6 RESULTS

After the final qualifying session, a number of teams were done for the weekend and packed up.  Others stayed for the final one hour of on-track time.  In the final session, Wayne Taylor Racing’s Kamui Kobayashi was fastest in his Cadillac with a lap at 135.572 mph.

Kobayashi’s lap was nearly two-tenths of a second faster than Mazda Team Joest’s Oliver Jarvis.  JDC-Miller MotorSports’ Loic Duval was third quickest in his Cadillac, followed by teammate Matheus Leist.  Only four of the eight DPi entries turned laps in the session.

Lapierre was fastest in LMP2 with a lap at 133.972, good for fourth overall.  The lap was nearly six-tenths of a second faster than DragonSpeed’s Harrison Newey.  Era Motorsport’s Ryan Lewis was third, followed by PR1 Mathiasen Motorsports’ Nick Boulle.

GT Le Mans saw a Porsche GT Team one-two as Earl Bamber was quickest at 124.469 mph, one-sixth of a second faster than Matt Campbell.  Serra was third, followed by Marcel Faessler in the No. 4 Corvette and BMW Team RLL’s Bruno Spengler.

GT Daytona saw Parente put his Acura at the top of the charts with a lap at 120.729 mph, good for 16th overall.  Parente’s time was seven-hundredths of a second faster than the Lamborghini of GRT Magnus’ Andy Lally.  GEAR Racing’s Rahel Frey, drafted in at the last minute in place of Ana Beatriz, was third quickest, while AIM Vasser Sullivan’s Townsend Bell was fourth.  Jack Hawksworth was fifth in the No. 14 Lexus.

IMSA WEATHERTECH SPORTSCAR CHAMPIONSHIP ROAR BEFORE THE 24 SESSION NO. 7 RESULTS

After three days of testing, what has been learned?  Mazda has two very fast RT24-Ps at their disposal, but the rest of the DPi class isn’t that far behind.  LMP2 has a number of very fast drivers this year and the cars are quite a bit faster.  Assuming that the amateur drivers aren’t that far off the pace, they could stick close to the DPis.

GT Le Mans will continue to be the scrum that it always is.  The Corvettes are the only question mark since they’ve never competed in a race before, but they have the pace to run with everyone else.  It will be a good one.  Finally, GT Daytona has a number of teams that will put up a good fight.  Staying out of trouble and good pit strategy will help to determine the winner.

Between now and the Rolex 24 weekend, a number of drivers will go off and compete in other races.  Next weekend, at least six drivers in the race will compete in the Hankook 24H Dubai at the Dubai Autodrome.  Six more drivers, including Mazda Team Joest’s Harry Tincknell and Rick Ware Racing’s Cody Ware, will travel to Australia to compete in the Asian Le Mans Series’ 4 Hours at The Bend near Adelaide.

Practice for the Rolex 24 at Daytona is due to start at 10:15 a.m. on Thursday, Jan. 23.  Frontstretch will be there to bring you all the coverage from Daytona.