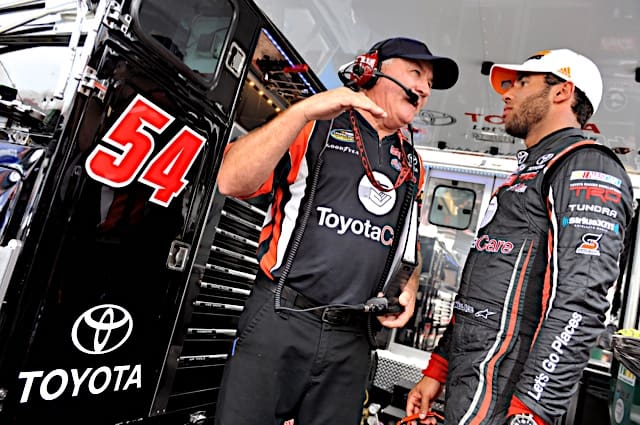 A familiar face for driver Bubba Wallace will be atop his pit box this season.

Richard Petty Motorsports announced Jerry Baxter will be the crew chief for Wallace in the 2020 NASCAR Cup Series season.

In 2014, Baxter guided Wallace to a third-place finish in the championships standings.

“During our time together, he trusted what I did as a crew chief, and trusted himself more and more, and we got better and better as we went,” Baxter said in a team release. “This is an incredible opportunity, and change is good. Having the confidence of Bubba and everyone at Richard Petty Motorsports means a lot to me. I am excited about working with Bubba again, and the foundation Richard Petty Motorsports has in place with their group of guys.”

Wallace welcomes the reunion after he has finished 28th in the Cup standings in back-to-back seasons.

“He has been a great mentor, and even better friend, since we were able to work together in 2013 and 2014,” Wallace said. “I am excited to see him get this opportunity in the NASCAR Cup Series, and use our past success to take this team to new levels.”

Talk about moving deck chairs on the Titanic.

So the problem was the crew chief and not the driver? Riiggghhhttt…..we shall see.

They left out what else bubba said: ” as a team we have made a ton of progress since my debit in 2018″.
28th, mmmm. Wonder who will get blamed next winter. Old crew chief kept wrecking bubba’s cars. How many years till they admit he’s not a cup driver. The sponsors know it seems.

Bubba reminder. Hey bubba, your contract extension ends after 2020. Talk about pressure and depression. The pressure is on to finish better than 28th.

Wow. Things are really going to start happening now. That was the only thing keeping them from sucksess

I forget…. what other recent driver in top tier equipment kept getting new crew chiefs every year for 5 years and never showed any improvement?

After Evernham, I recall Jeff Gordon going through several with varying results prior to his retirement. Not evey year, but every 3-5 or so.

Jeff is obviously a HOF driver and one of the best ever in NASCAR, but it is obvious the performance with Ray and Robbie was significantly better than with the other 3 Crew Chiefs.

Relationships are crucial between driver/crew chief for success. Some gel, some don’t. Maybe this will help Bubba break into the top 25. :-)

Wrong. That wasn’t the answer we were looking for and you didn’t phrase it in the form of a question.

Way too many moving parts and changes in both the driver and the sport to make that correlation to the crew chiefs. Although I agree with your overall premise of “Relationships are crucial between driver/crew chief for success”. Personally I think Jeff was just hungrier and more willing to take risks when he was younger and prior to being a father. Of course there is no way to discount what Jeff did with Evernham. I believe had they stayed together Jeff would have gotten to 100 wins (harder to speculate how championships would have worked out with all the varying crapshoot chase formats, IMO he would have had at least one with Latarte in 2007)

I always get angered when the problem is the driver, a moron could see it. A man gets fired because of the incompetence of the driver, several men often times. What a bunch of bullshit.

I wish him luck with such a terrible driver.