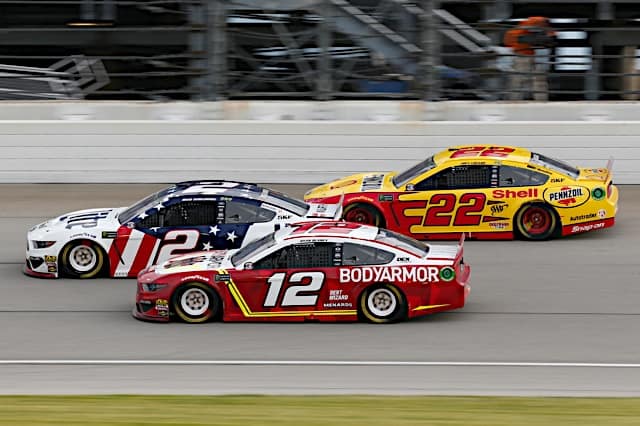 Team Penske’s crew chief lineup will look quite different for 2020.

Paul Wolfe will move to become the crew chief for the No. 22 team with Joey Logano, Todd Gordon will move to Ryan Blaney and the No. 12 team and Jeremy Bullins will be atop the No. 2 pit box with Brad Keselowski, the team announced Monday, Jan. 6.

For the 2019 season, Wolfe was the crew chief for Keselowski, Gordon led Logano’s team and and Bullins called the shots for Blaney. All three drivers won at least one race last season and qualified for the playoffs, and Logano finished fifth in the championship standings, while Blaney placed seventh and Keselowski concluded the season eighth.

“As we do after the completion of each season, we evaluated what we can do to better achieve our goals and we felt it was time to make these changes to better position us to reach our potential,” team owner Roger Penske said in a team release. “We are fortunate that we have three very strong leaders in Paul, Todd and Jeremy, who work with experienced and talented crews. Pairing each of these winning teams with different drivers and cars should provide new energy and a fresh approach for the 2020 season.”

Two of the crew chiefs are departing teams with which they have storied histories. Wolfe was the Cup championship-winning crew chief with Keselowski in 2012, while Gordon won the 2018 championship with Logano.

Bullins, meanwhile, led Penske to the Xfinity Series owners’ championships in 2013 and 2014.

I thought crew chief swapping went out with the 70’s.
Well as long as they are all consenting adults, I guess it’s OK. : )

As long as their wives are OK with it, then sure.

I figured their wives were in on it and part of the swap. .
Lot of possibilities there. : )

Todd Gordon cost Logano a lot this past season. He just did, fact. Bad calls consistently cost him. And I would say before the 2018 season. Joey did the best he could with bad calls, broken equipment and no freaking speed.
The team screwed up a lot too. Good riddance. Hope he works out well for Blaney. I think Bullins and Kes is a good mix. Paul and Joey…I dunno. Time will tell.

Joey and Brad are very accomplished drivers..like them or hate them. Blaney has not proven himself as of yet. So this crew chief swap had to happen. Maybe this fresh set of personnel pairing will breath new life???? Time will tell.