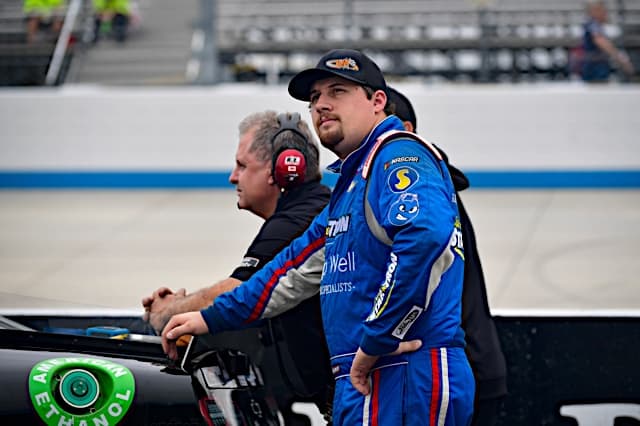 In the current landscape of racing, there’s a significant middle gap. Josh Williams, Mario Gosselin and Danny Johnson are looking to fill that gap.

Williams cut his teeth racing at the grassroots level. Between 2010 and 2018, he made 102 starts for his family-operated ARCA Menards Series team, JW Motorsports (which also fields Legends cars and Bandoleros), picking up a pair of victories in 2016 at Madison International Speedway and Fairgrounds Speedway Nashville.

Since late 2017, he’s been paired up with DGM Racing in the Xfinity Series, owned by Gosselin, scoring a top-10 finish in 2019 at Talladega Superspeedway last April.

For the past five years, Gosselin has put his primary focus on elevating his Xfinity program. In both 2018 and 2019, a DGM driver has finished in the top 20 in driver points.

Johnson, on the other hand, has been around racing since he was an infant. He started his own late model team in 2017 – DJ Motorsports – with primary driver Landon Huffman. Competing in 12-15 races, Huffman has a pole and victory at Hickory Motor Speedway.

Together, this trio of racers is putting its brains together to develop talent at a cheaper price. The goal? Have drivers go through its system, starting with Williams’ Bandolero team, at as early as 8 years old. The next rung up the ladder would be Legends cars, before moving to Johnson’s Late Model team. If the talent shows promise and can bring some funding to the table, up to ARCA they go, quite possibly moving to Gosselin’s Xfinity team at some point in time.

“We all have the same vision,” Williams tells Frontstretch. “We’re all racers, and we all know how hard it is to make this happen. There’s drivers that have enough money that don’t want to worry about it. There’s drivers that have enough money, but some of the smaller teams won’t look at them. Then you have your average people who can afford to go late model racing. We want to be able to cover all of those.

“We’ve all talked and thought about putting this program together where it’s kind of like a one-stop-shop. You can start all the way at the bottom and go all the way to the top. That’s our goal. Some families have different aged kids, so you don’t have to deal with multiple different people, you can deal with the same people with both of your kids. Say one is 18 and wants to run Xfinity and one’s 14 and wants to run a Late Model. That’s what we’re working toward.”

Like some drivers do these days, it’s always possible to go the non-traditional route and shoot straight to the Xfinity Series, though that driver would have to get licensed before making a start.

In his race shop, Williams has nine ARCA cars ready to race. During the week, he works on Legends cars and Bandoleros for a living, a side hustle from his weekend job in NASCAR. Regardless, he believes he’s got the equipment for one to have success in right off the bat, even if the driver can’t bring a ton of money to the table.

“If they say they want to run a Late Model race at Hickory and it’s $8,500 to do it the best we can do it, we can test the day before, have the right amount of tires and things like that,” Williams adds.” If they come back to say, ‘We’ve got $4,500,’ maybe we can eliminate the test day and we could run scuffs or whatever and knock the price tag down, where they still get the experience, they still get to run the same car but you’re not testing and putting on a bunch of tires.

Johnson, current crew chief for Chad Finchum in Xfinity at MBM Motorsports (he also crew chiefed Williams in ARCA), runs his Late Model team on the side. While traveling the NASCAR circuit pays the bills, it’s his passion for grassroots racing that makes him want to help out up-and-coming talent.

“There’s such a void in our sport right now with the higher echelon teams and then you have the lower end teams,” Johnson says. “There’s this giant void in the middle of the road from a low end team to a high-end team that I feel like we can bridge the gap. You have guys that have just enough money to run two or three races with Gibbs and if they don’t perform, they’re done.

“If we can bridge the gap between the [teams] and have a place where these guys feel at home from a Late Model to an ARCA car or a K&N car to an Xfinity car, they can stay within this program and build something and be able to sell sponsorship and promote themselves through the ranks and not feel like the next big team is coming in to take the little bit of money that they have for a short amount of time.

“We want to build a relationship and be a part of these people’s families from the Late Model side, ARCA side to the Xfinity side. We want to keep our sport to what we all love about our sport.”

Because the trio is looking to “bridge the gap,” Johnson believes “it’s a great importance for our sport to have guys like Mario that are racers that are in the garage at 6:30, 7 in the morning and still at the shop at 10 or 11 at night when we’re racing against guys that start work at 7 and leave at 4.

“They have 200 employees when we have three, five or sometimes even less than that. It’s just us, and then we have a group of racers that come help us on the weekend.”

Johnson admits that his day job at the track takes away from him being able to go to Hickory for every race. Instead, while he travels, he leaves Huffman and his family in charge of the team, where it’s had instant success since its inception.

When Williams threw out this idea last offseason, Johnson wanted to act immediately.

“There was no hesitation,” Johnson says. “We’ve got a good plan. If guys want to sign on, there’s enough of us to put quality cars on the racetrack that can win races and can do it. I don’t want to say an inexpensive price because everything in racing is expensive – at a reasonable cost.

“None of us are looking to do this and buy a house on the lake and be able to sit on a $100,000 boat on Sunday with our wives and our kids. We’re racers.”

Gosselin is always busy with few full-time employees at DGM Racing, spearheading an effort to run with the Xfinity goliaths. His hands are always dirty, turning wrenches and beating out fenders to make sure the Nos. 36 and 90 are ready to go weekly.

He believes this developmental program was a good idea from the get go, noting he’ll be around as much as Williams needs him to be. As for the program, it can be used as a guiding light for the drivers that utilize it.

“I think there’s a lot of talent out there and they don’t know how to get from point A to point B,” Gosselin says. “I get people that call me all the time, ‘How do I get my kid involved? Where do I start? Where do I go?’ It’s the first time that we’ve tried to put it out in this format to where we can take somebody from Legends cars and give them a path to get them approved and experience to move up into the NASCAR ranks, all the way to the Xfinity Series.”

Currently, the trio is laying the groundwork, continuously making it attractive for drivers to join its programs.

“I think this might attract some people to know, ‘If we do this, what’s next?” Gosselin notes. “They see that there is a path. Once you give somebody a path to follow, sometimes it makes it easier for other drivers to follow that path.”

Each of the three racers have had success in recent years, whether it can be shown on the stat sheet or not. Not only is Williams friends with both people (Gosselin says his relationship through Johnson runs strictly through Williams), but he also believes there aren’t many other people that would be better partners to set this up.

“They’re both full-blown racers,” Williams says. “They’re not a business guy with a couple million dollars that want to donate it to a program to see if it’s going to work. They’re racers that understand they’ve been there, and they’re loyal people.

“We’re trying to stick to the real racer, somebody who has built up a program from nothing and made it into something. That’s what we’re sticking with, and that’s why I feel like these two guys are really good. Putting us all three together under one roof is going to be good.”

The program will not have a specific name, as each team will still go by its respective identification: JW Motorsports, DJ Motorsports and DGM Racing.

However, the goal is to implement this system immediately.

“My program is sitting here race ready,” Johnson says. “I would love to put some kids in and test and do some things as quick as possible. Periodically throughout the season is the end goal to get some notoriety for the program.”

Williams’ ARCA team is looking at running the bulk of the schedule in 2020 with multiple drivers. His Bandolero and Legends cars are also ready to race.

Whether it’s a success or failure, the trio hopes to add value to these series as well as continuing to bridge the gap between small and large race teams.

“There are so many drivers out there that try to find money on their own: Ryan Vargas, Spencer Boyd,” Williams says. “These guys are pushing to find sponsors Monday through Friday [by] themselves. This program would be perfect for somebody like that, who can come up with a little bit of money every weekend to go racing. We’ve got an opportunity for you. There’s always that middle gap, and I think that we can fill it.”

Bring funding! That is what driver development is all about today. * year olds with parents who have disposable income to support the program.

So…..if we can help Junior live his and daddys dream…..for a modest fee of course, the world, or at least our part of it, will be a better place.