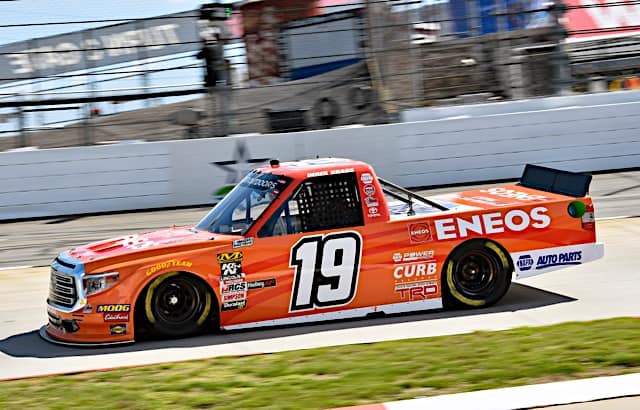 The 2019 ARCA Menards Series West champion is moving up the NASCAR ladder.

And so is his team.

Frontstretch has learned that Derek Kraus, an 18-year-old from Stratford, Wis., will make the foray into the NASCAR Gander RV & Outdoors Truck Series full time in 2020 racing the in the No. 19 Toyota Tundra.

He’ll be driving for newly formed McAnally-Hilgemann Racing, as Bill Hilgemann, a businessman from Kraus’ hometown of Stratford, has hopped on board with Bill McAnally.

The two will be taking their ARCA West powerhouse organization, boasting nine total championships in almost 30 years of competition on the West Coast, to the next level. BMR first debuted on June 13, 1992, at Shasta Speedway in Anderson, Calif.

Each of Kraus’ Truck Series starts have come with the organization, which ran a part-time schedule beginning in 2018.

Last season, Kraus earned five West wins and two East wins in what was known as the K&N Pro Series before its change to the ARCA Menards Series East and West for 2020. His former teammate, Hailie Deegan, earned two wins, while rookie Brittney Zamora earned a fifth-place finish in the standings. As an organization, it’s won 99 total races in K&N competition.

BMR will still have its ARCA Menards West organization based on the West Coast but will be handling their Truck Series operations on the East Coast.

It’s formed a technical alliance with Hattori Racing Enterprises, the 2018 series champions, and driver Austin Hill for the 2020 season. BMR’s trucks will be worked on from the HRE shop.

Sponsorship for the 2020 season will be from NAPA, ENEOS, Skooza, Shockwave and more partners to be announced at a later date.

Kraus has five career NGOTS starts, five of which came in 2019. His best career finish is eighth (Phoenix Raceway in 2018 and Dover International Speedway in 2019).