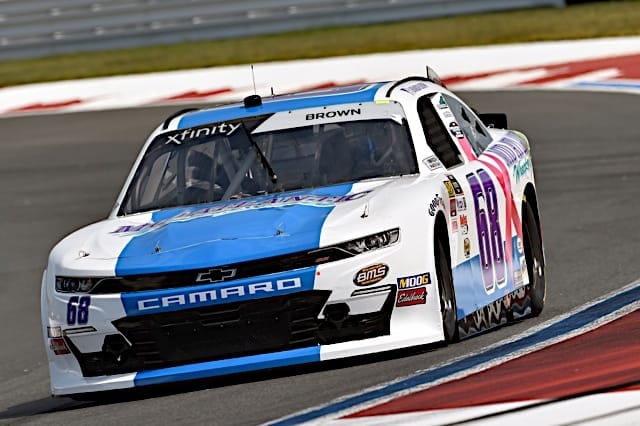 Brandon Brown surprised many in his rookie NASCAR Xfinity Series season last year, and he’ll be back again full time for family-operated Brandonbilt Motorsports in 2020 — though he’ll be sporting somewhat of a new number.

Brown will drive the No. 68 full time in the series in 2020, he confirms to Frontstretch.

Brown finished 15th in the championship standings in 2019, posting a best finish of sixth at Daytona International Speedway in July, with 22 top-20 finishes, primarily driving the team’s full-time No. 86.

He had a teammate for six races at Brandonbilt in 2019 with its part-time No. 68, and despite the primary team’s move to the No. 68, he’s hoping his family team can find funding for a full-time second car, the No. 86.

“We have the ability and are hoping to run a two-car team full-time, but we’re struggling to find some drivers to take the seat,” Brown tells Frontstretch. “It’s a harder climate of finding sponsors, which I know all too well.

Driving the No. 68 Chevrolet has a special meaning for Brown.

“It’s special because 68 is the number that I grew up with,” Brown adds. “I raced it in my first ever race in a go-kart, ran it all the way through Late Models. I lost it in the Truck Series because Clay Greenfield was racing the 68 truck and he didn’t want to let that number go. That’s when we went to the [No.] 86, but now the opportunity came up to run the [No.] 68 again.

“Personally, it’s really cool because that was the dream: take the [No.] 68 all the way to Cup, but we’ll see.”

Brown says the addition of a second car part time last year was to help the team get ready for 2020.

“It helped prep our team for what was to come,” Brown says. “The team feels like running one car was the initial hurdle. It kind of prepped us on how to work with other people in other organizations to make that happen, who to work with and who we want to work with. We tried a couple people with that second car.”

Brown confirms that the team is “100% more” prepared than it was heading into its first full season in Xfinity. And though he was surprised with how the team got out of the gate at the beginning of 2019, he doesn’t think it’s out of the question that he could make the playoffs this season, especially with a few of the top Xfinity teams shutting down.

“I think the playoffs will be in reach,” he says. “As long as we do what we’re supposed to do and I don’t go out and tear up a car every single weekend, I think we’ll be fine.”

Over the offseason, Brandonbilt opened up a second race shop, this one in Mooresville, N.C., to be more central to NASCAR country. The team will primarily operate out of the shop it built in 2018 in Fredericksburg, Va.