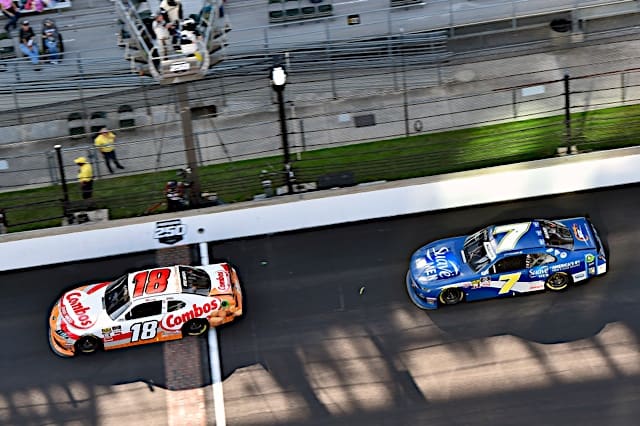 The series’ first IMS road course event, which is scheduled for July 4, will be sponsored by Pennzoil.

The change comes after Roger Penske finalized IMS and IndyCar Series’ purchase from Hulman and Company on Jan. 6.

“The Brickyard weekend has been a cornerstone of the IMS schedule since its debut in 1994, and we’re committed to the continued growth and revitalization of the event with its move from early September to Fourth of July weekend,” Penske said in a press release. “Our partners at NASCAR, NBC, Big Machine and Pennzoil share our passion for this great event, and we will work alongside them and others to deliver world-class racing and entertainment for our fans during a celebration of America.”

IMS also held a press conference Wednesday to discuss the weekend’s events. JR Motorsports driver Justin Allgaier was one of several people (including Penske) present to share his thoughts about the changes.

“I immediately got a big smile on my face,” Allgaier said when he heard about Penske owning IMS.

Additionally, it was announced during the conference that Matt DiBenedetto will be testing different configurations of the track next week.

The Cup Series race that weekend will remain on the IMS oval.

Second thought…. it can’t be any worse than running the oval so it has the potential to be somewhat better. If it is, will the Cup series follow?

Maybe they’ll go to one event on the oval and one on the road course. It’s something they are stupid enough to do.

They used to run Busch races at a track in the area that was perfectly fine.

Indianapolis Raceway Park. Went there several times 10-15 years ago for the Busch race and then Cup at the brickyard. It was always a good short track show that ended under the lights.