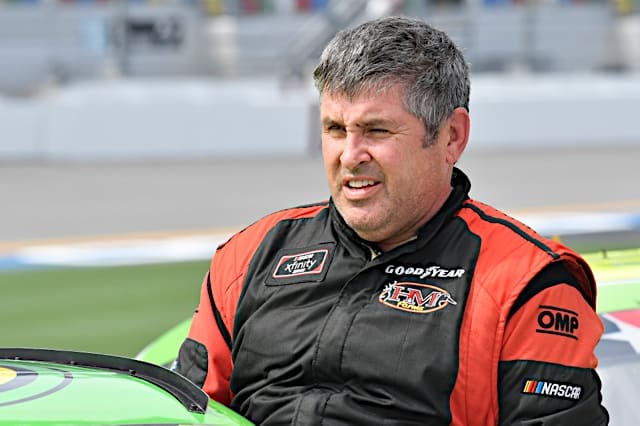 In addition to driving, he will also be the primary crew chief of the No. 93 Chevrolet.

Green, 57, has spent the past three seasons (72 races) as a primary driver for RSS, recording a pair of seventh-place finishes last year at Daytona. But following the July 12 race at Kentucky Speedway last season, the driver needed rotator cuff surgery, taking him out of the car for the remainder of the season.

Beginning at Road America — just over a month post-op — Green returned to the racetrack to call the shots for Josh Bilicki, leading the No. 93 car to a 20th-place finish. He went on to work with Hermie Sadler at Richmond Raceway (24th) and JJ Yeley for multiple races.

Calling a race was something new to Green, though it became something he enjoyed.

“Not that I’ve been my own crew chief in the racecar all these years, but every crew chief I’ve had has bounced ideas off of me throughout the race,” Green tells Frontstretch. “When you’re sitting on top of the [pit] box and you have the last call, it puts a little pressure on you and you just have to do things you were taught over the years, what you know in your memory bank to make the car better for the driver.”

Though Green believes he could race for “a while,” it’s all about finding opportunities. For his 2020 racing schedule, all he has lined up are the three superspeedway races at Daytona (Feb. 16), Talladega (April 25) and Daytona (Aug. 28). That’s not to say that he won’t race the No. 38 Chevrolet in other events, should sponsorship come around.

“We’re not going to start and park, so we’re going to race the [No.] 38 car as much as we have money to race it,” Green says. “I don’t know if that will be three races or 10. Other than the [superspeedways] right now, the only plan I have right now is to crew chief the [No.] 93 car. That will be exciting. I’ve got some good drivers to work with.

“I want to race more. If money allows, we’ll do that. If not, I’ll be crew chiefing most of the year.”

Green confirms he will be the primary crew chief in every race that he’s not entered in as a driver. Last season, he ran the full race as a crew chief in “select races,” while leading the start-and-park team in other events.

“I’m super excited about it,” he adds. “Rod [Sieg, team owner], Cowboy [Clifford Turner] and Ryan [Sieg] are going to put their trust me in to takeover the [No.] 93 car. We’ve got some good sponsors coming along the way for that [No.] 93 car running the whole season with two or three different drivers that are very funded.”

If all goes according to plan, being atop the pit box could be an exit strategy for the 2000 series champion.

“I’ve enjoyed working on racecars my whole life,” Green says. “I built my own racecars from scratch, worked on them, built motors in the early days, didn’t have the money to hire anybody to do it so I had to do it myself.

“I’m not going to drive forever. Obviously I haven’t been driving like I want to, being able to go out and race. The start-and-park deal is exciting, and we get to go out and make some fast laps every week, but we don’t get to finish the deal off.

“As a crew chief, hopefully we’re able to put a good enough effort forward to make the car better throughout the weekend and we can somehow make a good weekend out of that. If that’s the case, that’ll make me happy, too. Making a car that can drive better and making the right calls throughout the day will be just as fulfilling as being behind the wheel.”

Green will work with CJ McLaughlin for the majority of the schedule (McLaughlin has 20 races lined up with RSS Racing) in 2020, while a source with internal knowledge of the situation tells Frontstretch that both Joey Gase and Myatt Snider will share some seat time in the No. 93 car as well, though nothing has yet been announced about the latter pair’s association with the organization.

Great to see Jeff still in the touring series, but also sad to see the former PPC/Earnhardt/Childress driver finishing his career in such a sub-standard manner, in such sub-standard equipment….