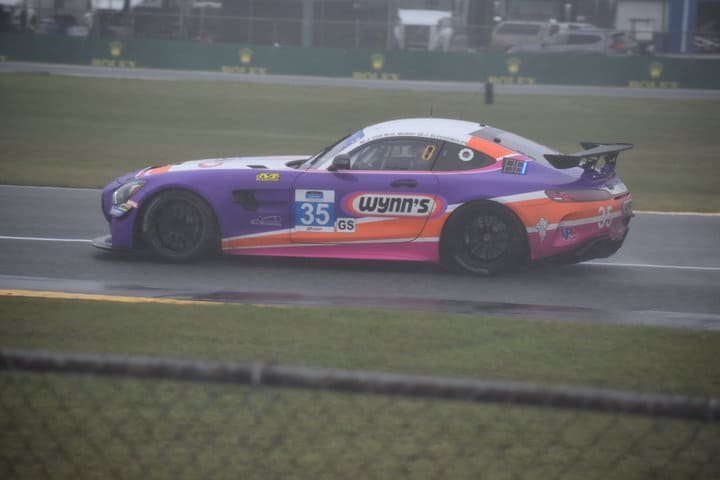 Riley Motorsports’ Jeroen Bleekemolen was fastest overall in opening practice Wednesday (Jan. 22) for IMSA Michelin Pilot Challenge teams at Daytona International Speedway with a lap at 104.726 mph.  Conditions were far from ideal as rain and winds as high as 30 mph lashed the 3.56-mile road course.  Given the weather forecast for Thursday and Friday, a full one-third of the field did not venture onto the track during the session.

The 34 teams that did press their luck Wednesday found a track that alternated between not too wet and quite wet.  That said, hi-jinks were kept to a minimum.  There were no red flags in the 60-minute session and only a couple of brief spins.

When it wasn’t raining, the winds were drying the surface.  The early portion of the session was relatively dry, allowing drivers to put down decent times.  Rain in the middle of the session slowed things down before another lull.  It was during this lull that Bleekemolen set his quick time.

Shortly after Bleekemolen set his quick time, the rain began falling harder than it had earlier in the session, combined with the high winds that actually knocked over a trackside advertising placard.  That ended anyone’s chances of beating Bleekemolen.

Rebel Rock Racing’s Robin Liddell made it six manufacturers in as many places in his Chevrolet Camaro GT4.R, while Team Hardpoint’s Spencer Pumpelly was seventh.  Russell Ward in the No. 4 Mercedes for HTP Winward Motorsport was eighth, followed by Scott Maxwell in the PF Racing-run Multimatic No. 19.  Billy Johnson, who was just added to Turner Motorsport’s No. 95 BMW driving lineup Tuesday, was 10th fastest.

In TCR, Bryan Herta Autosport’s decision to expand to three cars didn’t appear to negatively affect the team at all.  Newcomer Ryan Norman was fastest in class with a lap at 98.485 mph, good enough for 24th overall.  Norman’s lap was a mere four-hundredths of a second faster than Speed Syndicate Motorsports’ James Vance in his Audi.  Forty7 Motorsports’ Ben Waddell was third fastest, while Mark Wilkins in another Hyundai was fourth.  Mason Filippi was fifth, giving Hyundai four of the top five in class.

Michelin Pilot Challenge teams will be back on the track early Thursday for a full day of activity.  Practice No. 2 is scheduled for 9 a.m. EST and will be 45 minutes in length.