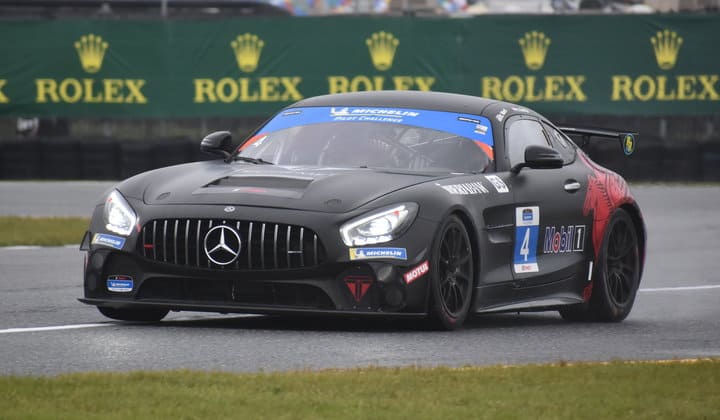 HTP Winward Motorsport’s Indy Dontje recaptured a little bit of his pace from the ROAR Before the 24 Thursday morning (Jan. 23).  He was able to top the timesheets in Michelin Pilot Challenge Practice No. 2 at Daytona International Speedway with a lap at 103.190 mph.

Any respite from the wet weather on Wednesday in the forecast went out the window when the sun came up.  Thursday dawned wet and foggy at Daytona International Speedway.  The only advantages over the first session were that it was about 10 degrees warmer and nowhere near as windy.  With rain continuing to move over the 3.56-mile road course from the east, teams felt that they couldn’t skip this session like they did Wednesday.  48 of the 51 teams entered set official times in the session.

Hyundai continued their strong form in TCR, once again taking four of the top five spots in class.  Gabby Chaves was fastest in class with a lap at 97.663 mph, a little more than a second slower than Chaves’ teammate Ryan Norman managed on Wednesday.

Chaves’ lap, which was good enough for 31st overall, was three-sevenths of a second faster than Team Premat’s Stephen Vajda in the sole Audi that broke up the Hyundai party.  Unfortunately, things weren’t so great for the team later in the session.  11 minutes after posting his quick time, Vajda stopped his Audi on course.  This brought out a red flag.

Michelin Pilot Challenge teams will have a 15-minute warm-up session prior to qualifying.  Unlike last year, qualifying is scheduled for 11:50 a.m. prior to the second IMSA WeatherTech SportsCar Championship practice session.