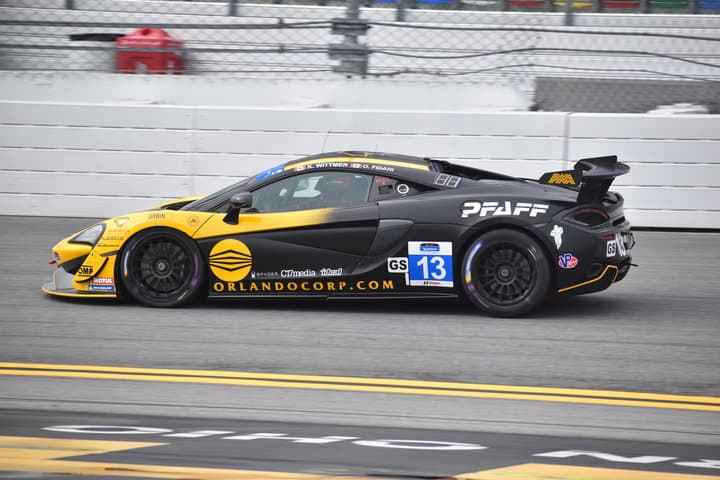 The track surface finally dried enough Thursday afternoon (Jan. 23) for IMSA Michelin Pilot Challenge teams to put on slicks and go out for qualifying.  The times tumbled quickly.  When all was done, Andrew Wojteczko Autosport’s Kuno Wittmer claimed the pole for Friday’s BMW Endurance Challenge at Daytona in his McLaren 570S GT4 with a lap at 113.465 mph.

“[The car] was quite extraordinary out there,” Wittmer told Frontstretch after the session.  “Once we saw that the weather was going to dry out, we put our dry setup on the car.  We put on what we knew [and we did it].  The team has a great knowledge of the car already despite it being pretty [new] to the team, and we’re really proud.”

Of note, AWA did not race their McLaren last year at Daytona.  The team made a midseason switch to McLaren from Porsche that coincided with Scott Hargrove being dropped from the team.

Wittmer’s lap is a full six-tenths of a second faster than any lap time that was posted during the ROAR Before the 24, but eight-tenths of a second slower than last year’s pole lap.  Wittmer’s lap on Thursday was a half-second faster than Carbahn with Peregrine Racing’s Tyler McQuarrie in his Audi R8 LMS GT4.  Russell Ward will start third in his Mobil 1-sponsored Mercedes, while Nate Stacy put the new KohR Motorsports Aston Martin fourth on the grid.  NTe Sport by M1’s Corey Lewis qualified his McLaren in fifth.

Other notables include veteran Scott Maxwell in 13th, Mike Skeen in 17th in his Audi and Hailie Deegan 20th in her Mustang.

Hyundai’s death grip on the TCR class from earlier was broken in the dry.  For much of the session, Speed Syndicate Racing’s Max Faulkner was quickest.  Then, he made the incorrect decision to pull in early.  The track continued to gain speed and Faulkner fell down the order, eventually qualifying 10th in class.

The Alfa Romeo Giuletta TCR is said to have an advantage on the straights over the rest of the TCR field.  If that’s so, KMW Motorsports with TMR Engineering’s Tim Lewis Jr. took full advantage.  When the 15-minute session was complete, Tim Lewis Jr. had taken his first career class pole with a lap at 107.430 mph, good for 32nd overall.

The BMW Endurance Challenge at Daytona is set to go green at 1 p.m. Friday afternoon.  The race will be streamed live on NBC Sports’ TrackPass service.