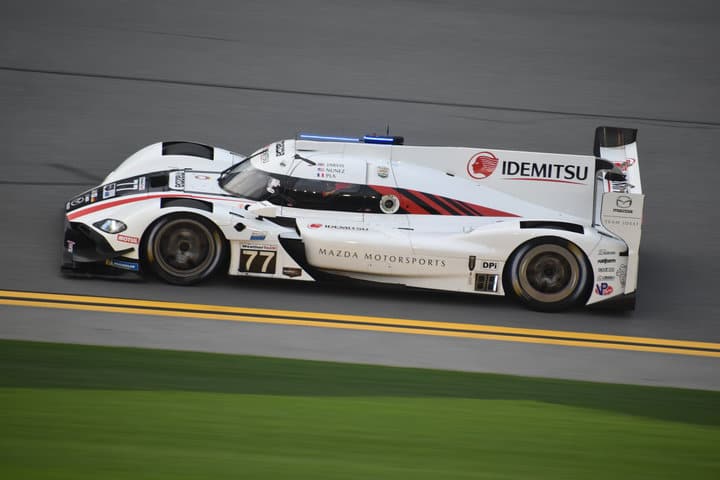 Mazda Team Joest’s Oliver Jarvis will once again lead the field to the green flag Saturday after he won the pole with a 136.760 mph lap Thursday afternoon (Jan. 23) for the Rolex 24 at Daytona.

“What a car [the crew] just gave me.  I cannot say thank you enough,” Jarvis said during the post-qualifying press conference.  “This year, it feels like we came in to do a job and [winning the pole] is just a small part of what we want to achieve this weekend.”

It took a fair amount of time for Jarvis to get to the front.  Everyone in the DPi class had to slowly build up to their best laps.  The Cadillacs were quickest early on as both JDC-Miller Motorsports entries and Wayne Taylor Racing’s No. 10 topped the chart.

Ultimately, the session came down to a duel between Jarvis and Acura Team Penske’s Juan Pablo Montoya.  Montoya struck first, but Jarvis was able to pass him by.  Then, just to give himself a bit of a cushion, he bettered his time.

Jonathan Bomarito in the second Mazda RT24-P will start third with Felipe Nasr fourth in the fastest of the Cadillacs.  Wayne Taylor Racing’s Ryan Briscoe will start fifth.

The session was shortened by three minutes due to a crash in the bus stop chicane for Ricky Taylor.  He had been late leaving the pits at the beginning of the session and was struggling to post decent times.

Taylor was running as hard as he could into the bus stop when he clipped a curb hard.  That sent him into the tires nose first.  Though he was uninjured, his Acura ARX-05 was significantly damaged.  For bringing out the red flag, Taylor lost his best time and was credited with 20th overall.  He’ll start Sunday at the back of the DPi class.

LMP2 was dominated by PR1 Mathiasen Motorsports’ Ben Keating. He put himself on top early on and maintained that advantage all the way to the checkered flag.  Keating’s lap of 131.519 mph held up to win the class pole in eighth overall.

GT Le Mans continues to be dominated by Porsche GT Team.  Porsche teammates Laurens Vanthoor and Nick Tandy swapped the top spot multiple times during the session.  When time expired, it was Tandy that ended up with the class pole with a lap at 125.393 mph, good for 12th overall.

Tandy’s lap was five-hundredths of a second faster than Vanthoor.  Corvette Racing’s Antonio Garcia was third, three-tenths of a second back.  Tommy Milner was fourth in the second Corvette, while BMW Team RLL’s Philipp Eng was fifth.