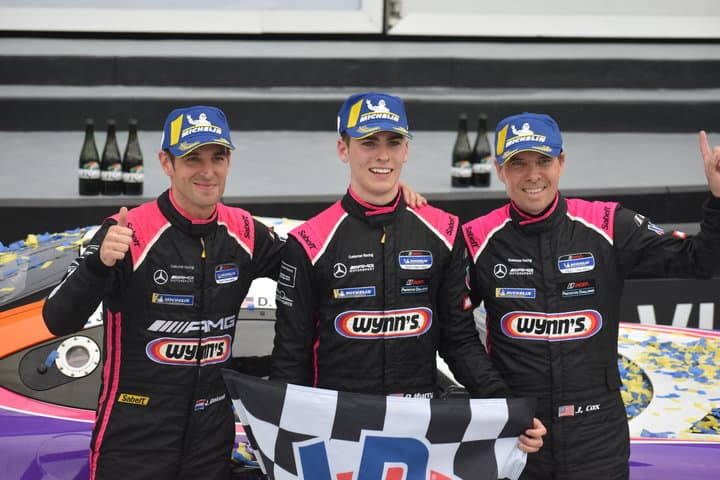 Friday’s BMW Endurance Challenge at Daytona was dominated by teams running the Mercedes-AMG GT4.  Following the first pit stop of the day, the dominant Mercedes was that of Riley Motorsports’ Wynn’s-sponsored No. 35 driven by Jeroen Bleekemolen, James Cox and Dylan Murry.  Bleekemolen was able to get up to the front immediately after the first full course caution.  From there, Bleekemolen and Murry were able to maintain to take the overall victory.

The race ended under caution after a huge crash on the backstretch involving Multimatic Motorsports’ Scott Maxwell.  With 15 minutes to go, Maxwell made a move in order to get past a slower TCR car.  He ended up misjudging the placement of Kris Wilson‘s Aston Martin Vantage GT4.  Contact was made, resulting in Maxwell spinning across the skidpad and hitting the inside SAFER Barrier.  The car then backed into a tire bundle and rolled over.  Maxwell walked away from the car under his own power, but it took a while to extricate the veteran racer from the car since it landed upside down.

Andrew Wojteczko Autosport (AWA)’s Kuno Wittmer started from pole in his McLaren and was very fast early on.  Wittmer’s primary competition early on was KohR Motorsport’s Nate Stacy.  Stacy was able to keep Wittmer in sight until contact with Carbahn by Peregrine Racing’s Tyler McQuarrie resulted in Stacy’s Aston Martin taking a ride through the grass that dropped him to sixth.

Wittmer was able to hold the lead until the first round of stops, when the AWA team chose to do a driver change and put Orey Fidani in the car.  That allowed TeamTGM’s Hugh Plumb to take the overall lead in his Chevrolet Camaro GT4.R.

A little over an hour into the race, Ave Motorsports’ Mike Skeen collided with LA Honda World Racing’s Chris Miller in West Bend.  The resulting crash brought out the race’s first yellow.  Skeen was able to continue, but Miller was out for the day.

For much of the rest of the race, it was Riley Motorsports at the front with HTP Winward Motorsport’s Mercedes giving chase.  Philip Ellis was more than able to keep Bleekemolen and Murry honest.

Murry took the lead for good with 26 minutes to go when KohR Motorsports’ Kyle Marcelli made his final pit stop.  He was able to pull out a lead of more than seven seconds before the Maxwell wreck ended the festivities.

Ellis and Bryce Ward ended up second, the best-ever finish for the No. 57 team.  Russell Ward and Indy Dontje were third in the second HTP Winward Motorsport Mercedes.  Defending Grand Sport champions McQuarrie and Jeff Westphal were fourth in their Audi, while Stacy and Marcelli ended up fifth.

In addition to Maxwell’s spectacular exit from the race, it was not a good day for Multimatic Motorsports whatsoever.  Hailie Deegan and Chase Briscoe dealt with a cut tire and what appeared to be a broken driveshaft before dropping out.  Austin Cindric and Sebastian Priaulx ran in the top five early before mechanical issues put them out.

In TCR, Roadshagger Racing’s Jon Morley told Frontstretch Thursday during an interview for a future feature that he and teammate Gavin Ernstone would win their class.  Early on, this did not seem likely as a penalty relating to RFIDs in their tires not triggering correctly put them near the back.

The penalty put Ernstone back to 16th after starting 11th.  From there, Ernstone began a charge to the front.  Knocking off approximately one car per lap, Ernstone was able to get into the top five on lap 11.  A few laps later, Ernstone was right on the tail of polesitter Tim Lewis Jr. in the race’s sole Alfa Romeo Giuletta.

A battle erupted, but Ernstone quickly emerged victorious.  It had taken all of 34 minutes for Ernstone to drive through nearly the entire class and get the lead.

After the first round of stops, the race quickly became an all-Audi show.  Ernstone was still up there, but he was joined by Audis from TWOth Autosport and Speed Syndicate Racing.

Once Morley got in the car, Speed Syndicate Racing’s Max Faulkner was out front and doing well until his car stopped on the apron of Turn 2 of the tri-oval.  This brought out a full course caution.

Team Premat’s Alexandre Premat was right there in the hunt late with Mikey Taylor in the second Speed Syndicate Audi and Morley giving chase.  Then the final pit stop came with 54 minutes to go.  Premat was leading coming in, but Morley was able to get past Taylor on his in-lap.  Excellent pit work from the Roadshagger Racing crew allowed Morley to jump Premat and take the class lead.

Premat attempted to give chase, but had contact with another car that resulted in rear end damage.  That ended his day.

Morley had a comfortable lead over Taylor when the final caution flew.  He was able to ride under yellow for the final 14 minutes and hold for his and Ernstone’s second career TCR victory.

Taylor and William Tally ended up second in the No. 32 Speed Syndicate Audi.  JDC-Miller MotorSports’ Michael Johnson and Stephen Simpson were third to complete the podium sweep for the RS3 LMS Club Sport.  Bryan Herta Autosport’s Michael Lewis and Mason Filippi were fourth in their Hyundai with teammates Ryan Norman and Gabby Chaves fifth.

“My stint ended up being boring thanks to my crew,” Morley said in the post-race press conference.  ”

Michelin Pilot Challenge teams are off for the next six weeks before returning to action at Sebring International Raceway.  The Alan Jay Automotive Network 120 at Sebring is on March 19.