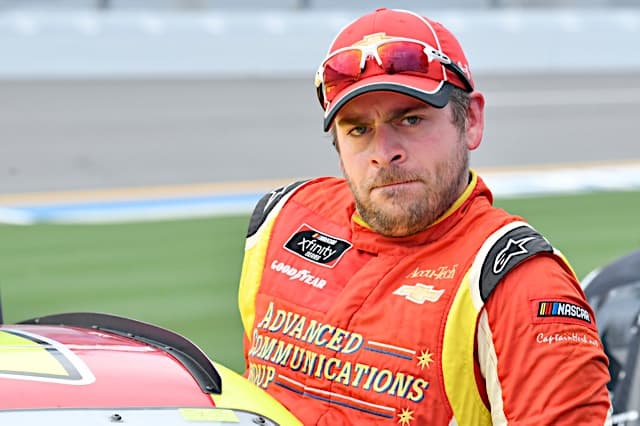 After a pair of top-20 finishes on superspeedways last season, Chris Cockrum is returning for all three superspeedway races in the Xfinity Series for 2020.

Cockrum, 33, will pilot the No. 25 Chevrolet for family-operated ACG Motorsports. However, he’s not ruling out the potential of running additional races.

“We’re going to compete in the three superspeedway races,” Cockrum tells Frontstretch. “Depending on the outcome of those three races, hopefully that will lead to a few more races on the mile-and-a-halves or some tracks like Richmond, Dover, anything like that.

“I’m looking forward to it. Last year we had a lot of success running well at superspeedway races, like our top 10 at Talladega, which was awesome for our part-time team. That was like a real shot in the arm to give everybody the confidence that we can run with [big teams].”

The Georgia native will be sponsored by Advanced Communications Group, which is the company he works for full-time during the week. That’s where you’ll find Cockrum installing voice and data lines, while doing other fiber optic work.

Jeff Spraker, who has called the shots atop the pit box in 14 of Cockrum’s 18 career starts, will again be his crew chief in 2020.

Come Daytona in two weeks, it will be more than seven months since Cockrum last sat in a race car, but from past experience, that doesn’t matter all that much.

“It’s kind of like riding a bike, you just have to knock the rust off,” Cockrum said. “There’s no substitution for seat time. Seat time is the best way to go about staying sharp. Thank God for iRacing because I’ve gotten on there and tried to keep myself sharp through that program.

Cockrum added that ACG Motorsports has just three chassis in its stable: one superspeedway car with two mile-and-a-half cars. Meanwhile, Spraker has three employees in Charlotte, N.C. that work on the No. 25 religiously to prepare it for Daytona.

In 18 series starts, Cockrum’s only two top 20s have come in his last two starts, noting that his 10th-place result at Talladega was a special day.

“If they would have cut the roof off the car at the start/finish line, you would have seen me doing cartwheels in that seat,” Cockrum said. “It was one of those races where we kept our nose clean because when you go to these superspeedways, anything can happen. You’re at everyone’s mercy and they’re at yours. If there’s one slip-up, it can be catastrophic.”

Cockrum isn’t giving up on his lifelong dream of being a full-time race car driver, even though his most starts in a single season was six in 2016.

“It all comes down to money,” Cockrum said. “I’ve never lost sight of that goal, but it’s like ‘OK, I would love to run full-time, but when you race a couple of time per year, how can I persuade a big, multi-million dollar company to give me the amount of money that we’re looking for to run full-time when you only compete two or three times per year?