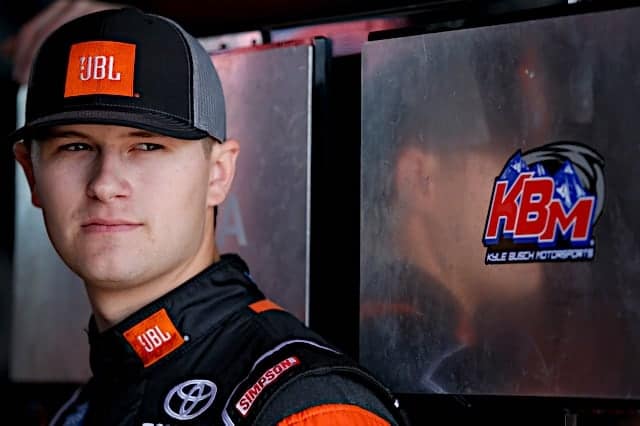 Black’s Tire will sponsor the No. 38 in four races during the 2020 season, beginning at Daytona International Speedway next week, the team announced Wednesday, Feb. 5.

“It means a lot to me that Black’s Tire is coming on board in 2020,” Gilliland said in a team release. “It’s really cool to see Ricky Benton’s passion for racing. I’ve spent a lot of time around him and everyone at Black’s Tire when my dad was racing for them, and they are all great people. It’s special that they believe in me and want me to carry on the legacy of representing Black’s Tire. I’m looking forward to having multiple opportunities to get them to victory lane this season.”

Black’s Tire has generally been a part of the Ricky Benton Racing organization in the Cup and Truck series, as team owner Benton also heads up Black’s Tire. According to a tweet from RBR, it does not plan to enter its No. 92 in the Daytona race, and it’s unclear if it plans to compete at all in 2020.

Gilliland’s father David has driven for RBR — and has by extension been sponsored by Black’s — multiple times in the past decade.

The other three races during which Black’s will sponsor Gilliland have not yet been announced.

Gilliland enters 2020 with a new team after competing for Kyle Busch Motorsports in 2019, winning one race. This is the first year of the partnership between DGR and FRM.

Rutherford is the managing editor of Frontstretch, a position he gained in 2015 after serving on the editing staff for two years. At his day job, he's a journalist covering music and rock charts at Billboard. He lives in New York City, but his heart is in Ohio -- you know, like that Hawthorne Heights song.
Previous Scott McLaughlin to Debut for Team Penske at the GMR Grand Prix
Next NASCAR Hall of Fame Announces Nomination, Induction Changes