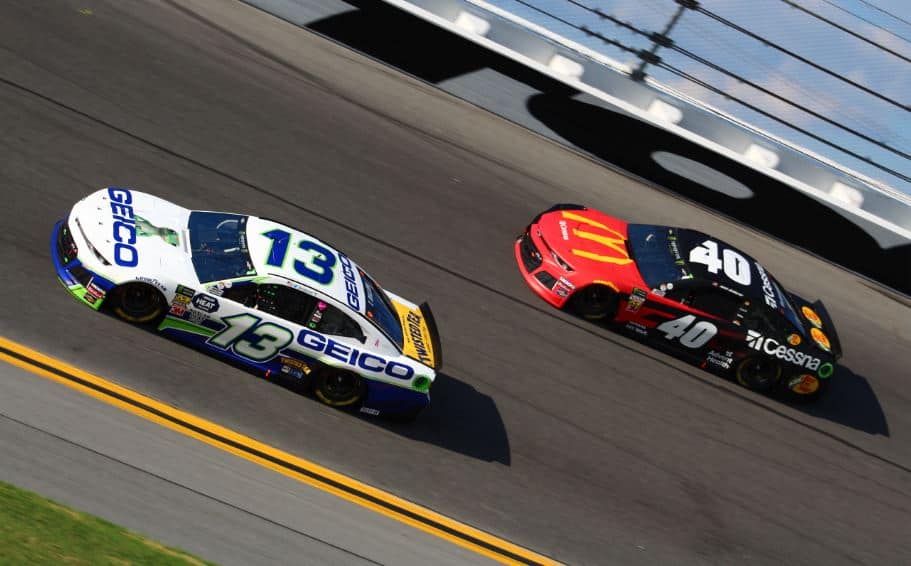 Rewind back to my season-opening column a year ago, and the theme was bridge building. The need for NASCAR to find a way to connect what have become two disparate fan bases; those remaining that follow NASCAR Cup Series racing religiously, and those that left the big tent behind for the nation’s remaining dirt tracks and bullrings. That same column included reference to a column by the AP’s Jenna Fryer, identifying Kyle Larson as the best-suited driver to build that bridge.

Oh, the irony, for it was a Kyle Larson remark that poured gas on what’s becoming a raging fire between all but warring factions of stock car racing.

“I’m sorry NASCAR, I’m sorry Daytona, but this is the biggest effing race I’ve ever won.” @KyleLarsonRacin on winning the #ChiliBowl.

Tribalism is running wild in all facets of life in this country, and racing has not proven immune. Larson’s audacity, justified or not, personal or not, to compare the Chili Bowl Nationals and its Golden Driller trophy to the Great American Race and the Harley J. Earl trophy had scores of dirt fans pumping their fists and scores of others struggling to take such a talented driver seriously. This struggle isn’t just confined to dirt vs. asphalt; ever-outspoken Brian Keselowski unleashed fury on the iRacing community last month as video racers joined with real stock car drivers to announce preseason sponsorship.

What facts dumbass? I play madden but it doesn’t make me a coach or football player. You idiots think you are on the same level as real racers and it’s a mental disorder. No different than kids shooting yo schools because they play shooting games, you people need help

These are some of the more extreme examples to be had, but the anecdotes make very clear that 2019 did little, if anything, to rally race fans around the checkered flag as I had observed needed to happen this time a year ago.

The powers that be are not blind to this emerging divide. Featured in Matt Weaver’s excellent column in this year’s Athlon Racing Preview mag, Race Team Alliance Executive Director Jonathan Marshall remarked, “We’re recognizing that there [are] increasingly two different kinds of fans… one of them is the local short track fan, some of them even used to be NASCAR fans… those are the type of fans we want to bring back.”

Problem is, it’s hard to understand what’s been accomplished over the last 12 months that will move that needle. The progress the package made in improving racing on intermediate ovals was canceled out by neutering the product on the circuit’s short tracks and road courses. The merciful end of group qualifying proved largely inconsequential, with car counts so low that over the course of 36 Cup races, only two cars failed to qualify all season long. On that same note, despite the much-anticipated merger of the K&N Pro and ARCA series, the East Series season opener saw its entry list grow by only one car, while the ARCA race at Daytona saw its entry list decline for the fourth consecutive year; as it stands, it will be the smallest ARCA field to hit the high banks since 1980.

I haven’t made it to Speedweeks yet, but I’ll wager that the first weekend will play out just like in 2019; the crowds for the Winternationals at Volusia and the World Series at New Smyrna will be equal to, if not greater than, those that hit the big track for ARCA rand the Busch Clash. Of course, when the cheapest Clash ticket is (still) $55, which will translate to roughly $1 a green flag lap if the scoring is done as well as last year, empty grandstands may speak more to the collective intelligence of race fans than anything tribal.

There’s plenty more zero-sum examples to be had. The Cup Series is getting a welcome influx of new talent into its ranks, with Christopher Bell, Cole Custer and Tyler Reddick all earning well-deserved promotions after putting on an incredible display in the Xfinity Series finale at Homestead-Miami Speedway. Problem is, the slot-car package they’ll be running when they tackle Homestead in a Cup car in March will prevent them from displaying much of the talent that made the Xfinity finale one of the most compelling races of 2019.

Further, while not applicable to the Cup ranks, there were plenty of undeserved promotions to go around, just like last year. Despite being outrun by his part-time teammates in 18 of 20 ARCA races and scoring only one top-five finish, Joe Graf Jr. will be racing in the Xfinity Series full time. Despite missing the playoffs in a powerful Kyle Busch Motorsports Toyota, Harrison Burton will be racing full time in Xfinity. Despite going two years without winning an ARCA race, Riley Herbst will be full time in Xfinity. Despite completing only 53% of the races she started in a truck, Natalie Decker was essentially promoted, taking her talents to a Niece Motorsports shop that nearly won the Gander RV & Outdoors Truck Series title with Ross Chastain behind the wheel.

Meritless change didn’t just apply to drivers. NASCAR opted to expand the Truck playoff field from eight to 10 after the vaunted KBM operation saw both its No. 4 and No. 18 trucks miss the cut a year ago. Though the sanctioning body was adamant this change was not a KBM rule, one can’t help but be reminded of when the Chase for the Cup got expanded from 10 to 12 drivers as soon as Dale Earnhardt Jr. started regressing in the standings (and look how well that worked).

None of these issues are going to be resolved anytime soon. Larson’s attempt to equate the Chili Bowl to Daytona is laughable, especially from a driver whose legacy at Daytona is winning an Xfinity race as a Cup driver with a pyramid scheme (allegedly) stolen from another driver on the hood, and in 2014 trying to imitate Geoff Bodine tearing down the catchfence. But as I noted in last year’s opening column, there’s something to be said for the fan experience of being jam-packed into venues like the Tulsa Expo Center instead of having rows of bleachers to oneself. And given the slot car package of today, the Chili Bowl arguably has become a greater test of true driving talent than most Cup races.

As much as I find the concept of professional video gaming, be it Fortnite or a racing simulator, to be laughable, I can understand NASCAR wanting to get involved in it. The hits don’t lie — eyeballs are logging in to watch iRacing. And if iRacing can yield a half-dozen William Byrons that are well-funded and actually display talent driving real racecars, the investment would be a dramatic success. Of course, I can also understand Keselowski’s frustration with the money flowing into iRacing; an iRacing title race last season paid more than a super late model racer could win if they swept every SLM feature at my local dirt track last year. Every dollar spent putting young fans in simulators could be putting them in karts and Legends cars.

Bringing this season-opening rant home, I’m every bit the conundrum that the sport finds itself trying to navigate. When all is said and done, there’s nothing I’m looking forward to more during my 10 days in Florida than the Daytona 500. There’s nothing Larson, or any of his dirt buddies, can do at Volusia, or Bubba Raceway Park, or at East Bay, that’s going to top the goosebumps I’ll have all day Sunday waiting for the 500 to go green.

Having said that, as I negotiated getting time off for Speedweeks with my other employers not named Frontstretch, I found myself far more motivated by being able to hit up five short tracks, dirt and asphalt alike, that I haven’t been to before than making the ARCA race, the Clash, the Duels or even the Truck and Xfinity series races. As much as I love the 500, and as much as I want to embrace the optimism that a new season brings, exchanges like these make me more and more convinced that I’ll soon be one of those former that Marshall refers to.

NASCAR: We lost our way. We have to get back to our roots.

Speedweeks 2020 is here. Meet the new year, same as the old year.

I’ll watch pretty much anything with an internal combustion engine and two or more people trying to faster than the others on a predetermined course – if I find it entertaining. Those last 5 words are are what NASCAR has been missing for a while. Making everyone the same is not interesting. The artificial manipulation trying to make it interesting is having the opposite affect.

You know what NASCAR is missing today that it has had in the past? An icon. A fierce rivalry. A young up and comer with plans to unseat the old men who are ruling the sport. The larger than life personalities. A story line about something other than NASCAR’s knee-jerk reaction changes to the rules/cars. I guess Jimmie Johnson is as close to an icon as we can get, and 3 or 4 of his championships have asterisks beside them thanks to the convoluted chase format. Don’t get me wrong, Jimmie is a HOF driver but he’s not as good as Jeff was and I can’t for the life of me put his 7 trophies on the same mantle as Dale and Richard’s. However, I would put Jeff’s 7 (had the chase format not stolen three from him) on the same mantle. And I was never a Gordon fan – I was a Martin fan, then a Stewart fan. Yeah, the two guys that would have won a lot more if Jeff wasn’t whipping them every week. lol

I don’t know, it’s just different. Too much meddling by the corporate crowd and not enough “just let ’em race” in today’s NASCAR. It’s too polished, too Hollywood, and it’s not a good look for racing’s rough and tumble roots which is what attracted fans to begin with.

Like Jeremy, I’ll watch pretty much anything with wheels trying to outrun someone else. As a NASCAR fan since the 60s who used to have season tickets at Michigan, I can say with some authority that the racing now is far from entertaining. Between constant rule changes, cars that rely on decal packages to look even remotely like something I can buy, and drivers whose primary job is corporate marketing, it’s a snoozefest. Last year was worse than usual since it was next to impossible to pass at most tracks. I often didn’t watch at all and just looked up results online. I’m hopeful this year will be better but my expectations are pretty low.

One final rant; I’m tired of listening to NASCAR crow about how the rules promote equality across the field while the manufacturer with the fewest cars in the field (and whose ads you need to step through to get to the NASCAR home page) dominates. Regardless of whatever conspiracy theories are out there, it sure doesn’t encourage fans to watch when the odds appear to be stacked against their favorite driver or manufacturer before the race even starts.

I wouldn’t expect much difference this year but 2021 is where we really see changes. So far the little feedback we have heard, results are positive.
Toyota has a lot of money wrapped into only a handful of cars with arguably some of the sports best drivers, so it makes as much since as Chevy dominating with Gordon and Johnson back in the 2000s. GM is building a new technical center in Charlotte, so with focus on 2021 maybe they will be able to become competitive again.