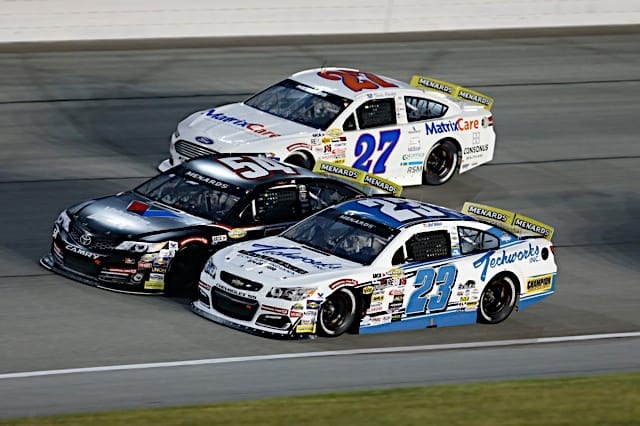 The second part of the Frontstretch ARCA Menards Series preview trilogy analyzes how the changes will affect the whole series. Part 1 broke down those changes, but what do those mean for competitors and fans?

The main issue with ARCA last year was its low car count. Charles Krall, manager of communications for ARCA, said series officials are diligently working to make the series affordable.

Merging the three series – ARCA and the ARCA Menards Series East and West – should incentivize teams to run in all divisions. At this time, no driver has been announced to compete full time in two of the three series, but there will be some overlap. For example, Venturini Motorsports announced Corey Heim will race part-time in all three levels.

The two main engines in ARCA this season are from Roush-Yates and Ilmor. Ideally, teams will run one of those two. The legacy engine is still legal, but it will be severely restricted, so any driver who uses it will be down on horsepower.

The diversification of the schedules hopefully entices super late model stars such as Bubba Pollard, Stephen Nasse, etc., to compete in an ARCA race. The purse for the 10-race ARCA Menards Series Sioux Chief Showdown is $150,000. So, in addition to earning money through the races themselves, teams are battling in those 10 races for more money.

The main series will continue to have the General Tire Superspeedway Challenge. That program has been around since 1984, and similar to the Showdown, it rewards the best teams at the 10 non-Showdown races with more prize money.

Regarding the tracks on the schedules, Krall said he believes ARCA is in a fortunate position as there were more interested race tracks than available race dates. The Showdown does not even contain all the tracks under 1 mile. Madison International Speedway is not in the Showdown, yet Krall praised track owner (and also ARCA Midwest Tour Series owner) Gregg McKarns for putting on a great race day. The question, though, is whether it will translate to a higher car count. Last year, only 18 drivers competed in that race, tied for the lowest all year.

When Frontstretch panelists examined this season’s ARCA schedule, there was some skepticism. One such instance was the race at Phoenix Raceway. Yes, it will be a haul for teams, but as part of the Showdown, it has more money on the line. I would like to see some of the West teams compete in that race, as it would add some fresh storylines.

Nevertheless, Ron Drager, current president of ARCA and track owner of Toledo Speedway, is a firm believer in the schedule changes. Consider this: Drager willingly allowed Toledo to be moved from ARCA to the East schedule.

Drager is not the only promoter who believes in these changes. Tim Bryant, owner of Five Flags Speedway, also followed suit, with the East Series now racing at the track famous for the Snowball Derby.

As for the West Series, Frontstretch‘s Davey Segal applauded its schedule. He likes the move from the Las Vegas Motor Speedway dirt track to the track’s bullring. He said it will be a better show because the dirt track is not good for stock car racing. Now the West Series will be racing on a 0.375-mile short track instead.

Segal predicted the race at All American Speedway will be a big weekend for the West Series because that track is owned by Bill McAnally. He fields five full-time teams, and none of his drivers won there last season. With the right promotion, that race could be a series highlight.

The modified pit stops benefit teams because they no longer need to invest large sums of money on pit crews. Lowering the cost, even if the revenue is the same, nets a better profit or at least allows teams to break even.

Hallelujah, ARCA simplified its points system! Now series officials should not need to adjust the points after an audit. Here is a simple breakdown: 46 points for the winner, 42 for second place, 41 for third place, etc., with a one-point bonus for winning the pole, one point for leading a lap and one bonus point for leading the most laps. It is that simple. This points system was implemented for ARCA, East, West and the Showdown.

While any points penalties have been adjusted in accordance with the new points system, ARCA will not have any complete disqualifications or taking a win away. Nobody wants to see any penalties, but ARCA should have adopted the NASCAR disqualification process. Under the ARCA format, if a car fails inspection, the penalty is more subjective. The NASCAR process simplified the process, and it is transparent for all — no cheating allowed.

What race will serve as a measuring stick for how well these changes have improved ARCA? Krall predicted the third race of the season, coming at Salem Speedway.

Last season, Salem hosted two ARCA races, and the car count was 19 and 21, respectively. Modified pit stops, the increase in Showdown purse money and the continual opportunity for drivers younger than 18 to compete should hopefully raise the car count to at least 25. If the car count remains akin to last season, ARCA car counts will likely be in trouble for all the races.

Admittedly, Krall and ARCA officials know the races at the large tracks such as Chicagoland may not see as large of a car count. However, if teams save money at the tracks with modified pit stops, will they be willing to reinvest and then go race at those large tracks? Even if the car counts do not significantly increase, credit officials for their hard work and commitment to better the racing.

Lastly, the ARCA website and social media accounts have changed, and for the better. It is a fresh look delivering the fans that for which they have been asking.

ARCA is ushering many new changes for this season. Will they improve car counts and make for better races? We shall see. As for the car count and driver lineups for this season, stay tuned for those in part 3.