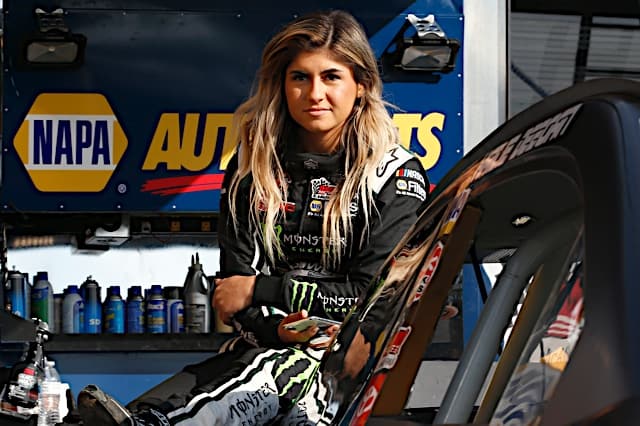 It took until the final 10 minutes of practice to see a true drafting pack develop in Lucas Oil 200 practice at Daytona, and though Hailie Deegan wasn’t at the front, she proved the fastest.

Deegan and her No. 4 DGR-Crosley Ford topped the charts in the first ARCA practice Friday.

Said Deegan of her first experience in the draft:

Herbst was top of the charts for much of the session with a strong single-car run. However, after the three Venturini Motorsports entries of Dollar, Ryan Repko and Michael Self ran in a pack with around 20 minutes left in the session, drafting took the session over. The practice ran without incident.

Despite a persistent wind blowing throughout the speedway, little was said about the conditions. Said Jacob Heafner, who finished seventh in practice speeds, his No. 77 Chad Bryant Racing entry felt the wind only during single-car runs. More importantly, Heafner picked up on some important nuances in the draft. Despite being new to pack-racing, Heafner was confident that the ARCA cars were capable of laying off each other to make runs in the draft, a handling trait that bodes well for Saturday’s race.

32 of 33 cars made at least one lap during the session. The only car not to take time was the No. 87 of Chuck Buchanan Jr. The team is on-site and was working on its car throughout the session.